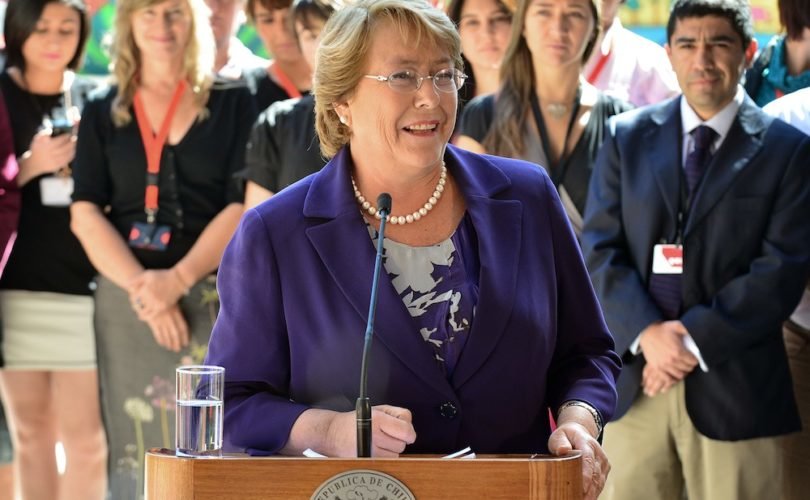 Bachelet, a member of the Socialist Party, used her Twitter account to praise the vote. “Today, women reclaimed a basic right … to choose,” the president wrote. “I am hopeful that the Constitutional Court will listen to the voice of the majority.”

In language critics called ambiguous at best, the proposed law legalizes aborting a baby “when the fetus is unviable.” It also allows terminating a baby at any stage of development if she was conceived by rape. It passed 70-45 in the Chamber of Deputies and 22-13 in the Senate.

The next step is for Chile's Constitutional Tribunal to determine in the coming weeks the legality of the new abortion law.

Pro-life leaders in the country decried the law as “punishing the innocent (baby conceived) and letting the guilty (rapist) off free.” They also argue that the law would encourage women to file false charges of rape.

National Catholic leaders spoke out against the bill. Bishop Cristián Cordero of Puerto Montt commented, “The reason given is the 'right of the woman to decide.' To decide on the life or death of your child? Who gave you that right?” The bishop noted the proposed law “contradicts the first human right that is to the protection of life … as indicated in the Chilean Constitution.”

Chile's Constitution “guarantees to all persons … the right to life and to the physical and psychological integrity of the individual. The law protects the life of those about to be born.”

The two-thirds Catholic country has been the target of pro-abortion pressure groups both inside and outside of its borders. Protest marches both for and against abortion were organized throughout the nation.

Caludia Dides, director of the pro-abortion group Miles Chile, characterized the vote as “a great triumph that will allow Chilean women to feel safe.” She criticized pro-life laws because they “limit individual freedom.”

Bishop Cordero advised secular legislators “who claim to be human rights defenders” to listen to Chile's many pro-life citizens. He added, “Believing parliamentarians should listen to God's command: ‘Thou shalt not kill.'”

Monsignor Cristián Contreras of the Chile Conference of Catholic Bishops said abortion is never “therapeutic” and Catholicism can never condone it. Numerous Catholic hospitals and healthcare facilities vowed never to go along with the bill.

As with all pro-life countries, the law never penalizes saving the life of the mother, even if it indirectly results in the death of her child in the womb. Unfortunately, this latitude is abused by women and abortionists who claim an abortion is for the woman's health. In 2014, more than 30,000 abortions were reported as such “accidents.”

The New York Times reported that tens of thousands of illegal abortions are committed in Chile every year. Activists say those abortions are “unsafe” and the new law will make abortion less dangerous. Under current Chilean law, caught and convicted abortionists can be sentenced up to three years in prison.

The bill now goes before Chile's Constitutional Tribunal for approval. The Tribunal is headed by Carlos Carmona, an abortion-supporting Bachelet appointee, until August 29.  He will be replaced by pro-life conservative Ivan Arostica, so the Bachelet administration lobbied legislators to rush the vote in order to get the bill before the Tribunal while Carmona can still cast the deciding vote.

Bachelet's term as president ends next year. Before being elected for the second time, she was the executive director of the United Nations office of Gender Equality and the Empowerment of Women.