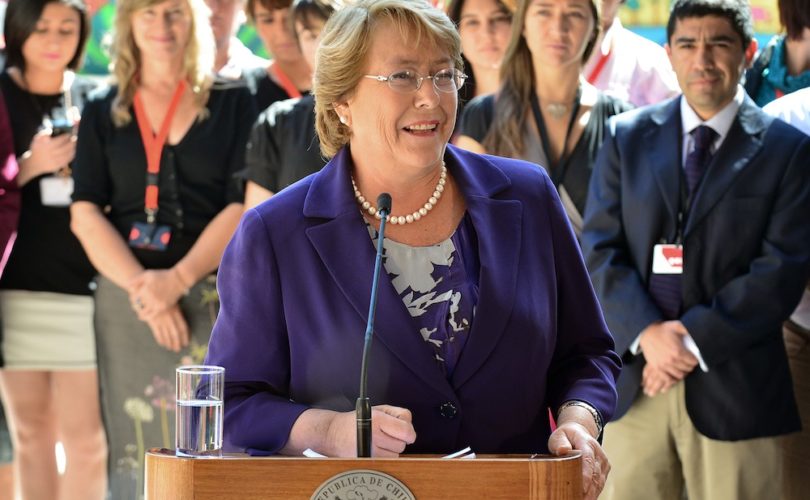 SANTIAGO, Chile — Amid opposition from the general public, conservative political parties, and the Catholic Church, Chilean President Michelle Bachelet plans to implement suggestions from the UN that Chile de-criminalize abortion in cases of rape, non-viability of the fetus, and danger to the life of the mother.

Since the end of the Pinochet era in 1990, when abortion was criminalized in all cases, Chile has had one of the most complete bans on abortion in the world.  In the past, traditionally socially conservative Chileans rejected entreaties from the UN to legalize abortion in certain instances.

“We believe there are very good motions in Parliament right now that the Executive could sponsor.”

However, current president Bachelet announced Chile’s commitment to implement 180 of the 185 suggestions in the UN’s Universal Periodic Review of Chile, including proposals put forth by nine countries that Chile change its longstanding stance on the protection of the innocent unborn. Among the five rejected suggestions were the Vatican’s appeal that Chile continue its legal protection of preborn persons from the moment of conception, and that it safeguard marriage as being between one man and one woman.

Since 1991, there have been more than ten unsuccessful attempts to pass laws through Chile’s National Congress to decriminalize abortion, but this is the first time a president has invested some of her own political capital to push the issue.

Referring to proposed laws decriminalizing abortion currently in the National Congress, Bachelet stated, “We believe there are very good motions in parliament right now that the Executive could sponsor. The truth is, that what I aspire to is to have a serious, profound and mature discussion about this subject.”

Chilean pro-life organization Siempre por la Vida (Always for Life) organized a protest on May 26 outside the presidential palace in Santiago that attracted several thousand protesters.

The president of the organization, Julio Isamit, said to the crowd: “We have done great work. To begin working before the law exists was a good decision, but the most intense part of our activities is yet to come.  It will be in the next few weeks, in the next few months when our presence in the streets, when our formation and our commitment must pass every test, the children and women deserve this.”

Senators of the opposing political parties attended the demonstration and delivered a letter to the president expressing their discontent with the planned legislation and the lack of debate on the issue.

The letter, obtained by Chilean newspaper La Tercera, asks Bachelet to “reject the nine recommendations made by states to legalize or decriminalize abortion in certain cases.”

“There has not been a previous legislative debate in accordance with the democratic process that an issue of this magnitude deserves,” it adds.

In a statement to Chilean newspaper El Mercurio, right-wing political party leader Gustavo Hasbún of the Independent Democratic Union, who attended the protest, said,   “Obviously what these type of projects are trying to do is legalize the death penalty for innocent children and find the easy way out.”

Santiago’s Cardinal Archbishop, Ricardo Ezzati Andrello, compared the decriminalization of abortion to the measures proposed by Bachelet to protect, house, and sterilize animals. “Despite the respect pets deserve,” the prelate said according to La Tercera, “I believe that people and human life are worth much more than that.”

Feminist and anti-life forces believe that a Chile led by a separated, agnostic woman who has actively courted the younger, less religious, middle class vote is more likely than ever to accept a carefully worded law that specifically enumerates the cases in which it will be legal to abort.

The pro-abortion push comes as left wing politicians promote hate crime laws protecting homosexuals as well as homosexual “marriage” legislation, all of which Bachelet has promised to pursue during her second term as president of Chile.