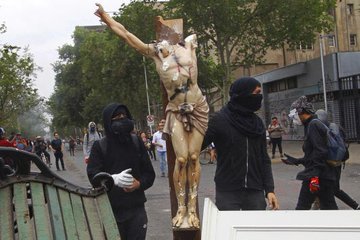 SANTIAGO, Chile, November 11, 2019 (LifeSiteNews) — The bishops of Chile deplored the sacking and burning of an historic church in the country’s capital city by masked rioters, who also profaned the tabernacle, destroyed religious statues, and smeared graffiti on interior walls.

“We are in solidarity with apostolic administrator Msgr. Celestino Aós and all of the faithful of the Archdiocese of  Santiago following the sacking and profanation of Assumption of Mary parish. Likewise with the communities and pastors of other churches and places of worship of various faiths who were attacked in various cities,” read a communique from the Catholic Bishops’ Conference of Chile. This followed the pillaging of the church on Friday by masked marauders who broke into the church and caused serious damage.

On Friday, a group of masked protesters dressed in black and resembling “antifa” anarchists in the United States broke into the Assumption of Mary parish church, stealing pews, confessionals, and religious statues to form barricades in their resistance to police. Much of the religious statuary was smashed and painted over with anti-Catholic graffiti. The historic church dates to 1876. Some of the church goods were used to build a bonfire in nearby Plaza Italia. Also, the headquarters of a private university located near the church was destroyed by arsonists.

Amateur video recorded the vandals removing a statue of the Virgin Mary, along with other sacred objects, from the church. The tabernacle was damaged and smeared with the word “rapists.” Photos taken at the scene showed that the door of the tabernacle was left open. Also, the words “burn the church” were spray-painted nearby on an interior wall. The crucifix was hauled out of the church, broken, and put on display in the street.

The final war between Good and Evil has begun and Antifa is at the front line pic.twitter.com/uMTaO33reg

In their statement, the Chilean bishops expressed their regret over the “mistreatment of people, the constant pillaging and violence, from wherever it comes. The attack on churches and places of prayer causes us pain, with no respect for God and not by people who believe in Him.”

“Churches and other places of worship are sacred,” the bishops declared, adding that they join with other people of Chile in rejecting violence and pray for God’s forgiveness.

“The violent can only impede us in paying adequate attention to the just complaints on the part of the majority of the Chilean people who are seeking realistic and just solutions,” the bishops stated.

While calling on authorities to apply the law to the culprits, the bishops said their countrymen are “tired of injustice, but also violence, and the great majority are anxiously awaiting a respectful dialogue that can rebuild the social fabric.”

Starting October 18, protests were sparked in the capital city, Santiago, after the government’s decision to raise ticket prices for urban transit. After outbreaks of violence that included arson, pillaging, and fare-dodging, the government announced emergency measures that included limits on travel and public meetings.

When similar violent incidents occurred elsewhere in the country, the government announced further measures to calm the situation, including curfews. However, protests continued, resulting in the deaths of at least 10 persons, 4,000 arrests, and 1,600 people injured, some seriously, by non-lethal rounds fired by police. At least 1,000 police officers have been injured. Costs tied to the violence are expected to surpass $16 million.

Our churches are being vandalized and profanated in Chile. Today it was The Assumption parish. Please, pray for Chile. This is our third week of violence and chaos.
Nuestras iglesias están siendo profanadas. Por favor, recen por Chile ���� @ProtecttheFaith @RorateCaeli @EscritMao pic.twitter.com/LcdNWxwE3t

Aós released a video message on Saturday deploring the pillaging of the church and a nearby university administrative building while also denouncing the deaths caused by the continuing violence. He called on Catholics to pray after Mass on Sunday and ask God’s forgiveness for the violence and injustice witnessed in Chile.

The pillaging of the church in Chile drew comparisons to similar profanations that have occurred historically in Mexico, Spain, and Russia. Such violence against churches in Chile has been heretofore unknown. In neighboring Argentina, churches were set on fire by supporters of President Juan Peron in the 1950s.

Since October 18, some 80 of 136 subway stations have been destroyed by masked vandals after a slight increase in the price of tickets. Protests against the price hike have morphed into denunciations of economic and social disparities in Chile, including student debt.

President Sebastian Piñera has responded with a strong law enforcement response, which some have criticized as excessive. Some protesters have lost eyes and suffered other serious injuries when struck by non-lethal munitions fired by police.

Piñera has also responded to the crisis by replacing his cabinet, offering small increases to subsidies for the poor, cancelling a scheduled electric utility price hike, and announcing a reduction in salaries for national legislators, which vary from $27,000 to $44,000 per year. Currently, the average income in Chile is the equivalent of $433 per month.