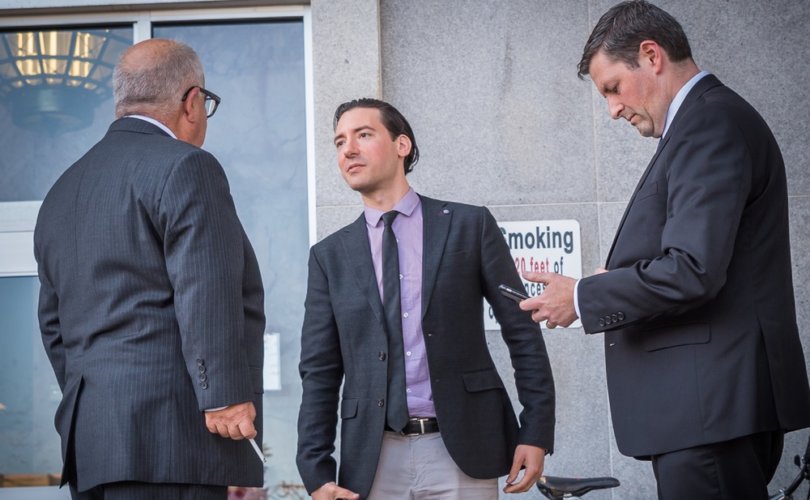 September 12, 2019 (LifeSiteNews) – Over the last 48 hours, LifeSiteNews journalists who traveled to San Francisco to cover the David Daleiden hearing broke two important stories revealing that the Obama administration requested California investigate the Center for Medical Progress (CMP), and how forces within the government actively seek to violate the First Amendment rights of pro-life media and activists.

On Tuesday, California’s Attorney General Xavier Becerra asked for a gag order against the lawyers for David Daleiden and Sandra Merritt during the preliminary criminal hearing of the pro-life investigative journalists.

In a move welcomed by the defendants, yesterday morning Judge Hite denied the gag order that would have muzzled Daleiden’s and Merritt’s lawyers from referencing the aborted baby body parts traffickers in “public comments” to the media. Granting the order would have ultimately restricted reporting, especially that of LifeSiteNews, on the preliminary criminal hearing.

In a separate breaking news story on Tuesday, LifeSiteNews reported that court testimony revealed that it was the Obama Administration which had set in motion the California attorney general’s investigation of Daleiden and Merritt.

Brentford Ferreira, lawyer for Daleiden, suggested to LifeSiteNews that although the orders to investigate the pro-life activists came from the U.S. and California Attorneys General, “Planned Parenthood and the National Abortion Federation were the true engines of this prosecution.”

We live under a pro-abortion regime

“This [is] the Sexual State at work,” said Jennifer Roback Morse, Ph.D., founder and president of the Ruth Institute and author of The Sexual State: How Elite Ideologies are Destroying Lives and How the Church was Right All Along.

“The pro-abortion regime under which we all live did not just fall out of the sky, like an unplanned act of nature. Agents of the State, including the State of California, and going all the way up to then-President Obama, collaborate with Planned Parenthood to keep Big Abortion alive and well and safe from citizen journalists David Daleiden and Sandra Merritt,” Morse told LifeSiteNews.

“Why is the State so interested in supporting the Abortion Regime? I think journalists should ask this very pointed question of Senator Harris and Obama-era Attorney General Loretta Lynch,” advised Morse. “I do hope…David Daleiden’s attorneys will ask this question in the courtroom as well. I am sure the majority of the public that identifies as pro-life would love to hear the answer.”

“These are two more examples of how this isn’t a trial, it’s a political witch hunt,” the Media Research Center’s Dan Gainor told LifeSiteNews. “The government wants to hide testimony and restrict the press because Americans would be outraged if they knew the monstrous activities of the abortion industry.”

‘History will not look kindly on this chilling abuse of power’

“Public officials tasked with seeking justice should be thanking, not persecuting the brave citizen journalists at the Center for Medical Progress for exposing Planned Parenthood and the abortion industry’s role in the brutal harvest and sale of baby body parts,” said a spokesperson for the Susan B. Anthony List (SBA).

“Already this hearing has produced stunning admissions that Planned Parenthood’s baby parts buyer sold the beating hearts and fully intact heads of innocent children killed in potentially illegal abortions, and that the intimidation campaign against the whistleblowers went all the way up to the Obama Cabinet,” said SBA List.

“Coming at a time when President Trump’s Protect Life Rule is under attack from pro-abortion Democrats in Congress, it is the latest vindication of the President’s efforts to hold Planned Parenthood accountable and stop taxpayer funding of abortion businesses,” the pro-life political group noted. “The abortion industry and their political allies clearly fear the truth getting out. We in the pro-life movement will not be silenced, and history will not look kindly on this chilling abuse of power.”

“When you consider how the mainstream media and pro-abortion politicians and officials have tried to cover up the facts about Planned Parenthhood’s harveting and sale of infant body parts, a gag order request is no surprise,” said Kristi Hamrick, Students for Life of America spokesperson.

“But the case going on right now only underscores the fact that Planned Parenthood worked to profit from the broken bodies of infants aborted by their vendors. It’s an ugly truth, and one that we hope will come out loud and clear in court and eventually nationwide.”

Pro-life priest: ‘This is war’

Father Frank Pavone, National Director of Priests for Life, sees this as part of a political battle.

“The current election season is a crucial time to make something perfectly clear: The Democrat Party is the political arm of the abortion industry, and nothing more. It is completely absorbed in promoting and protecting abortionists and abortion businesses like Planned Parenthood, who in turn contribute tens of millions [of dollars] to the political campaigns of Democrats,” Pavone told LifeSiteNews.

“It has been this way for a long time, but this truth is becoming more clear now than ever, not only by the Daleiden-Merritt trial but by the astonishing admissions and actions of top Democrats, including the presidential candidates.”

Pavone said that his organization met with staff members of Democrat U.S. representatives this week “who are not even willing to protect babies who survive abortion.”

“Any notion that the clergy, the Church, or any believers can be politically neutral anymore in the light of these developments must be discarded,” declared Fr. Pavone.

“This is war, and politically, it is and must be de facto a war against the Democrat Party. And that is not by our choice, but by theirs,” he added.