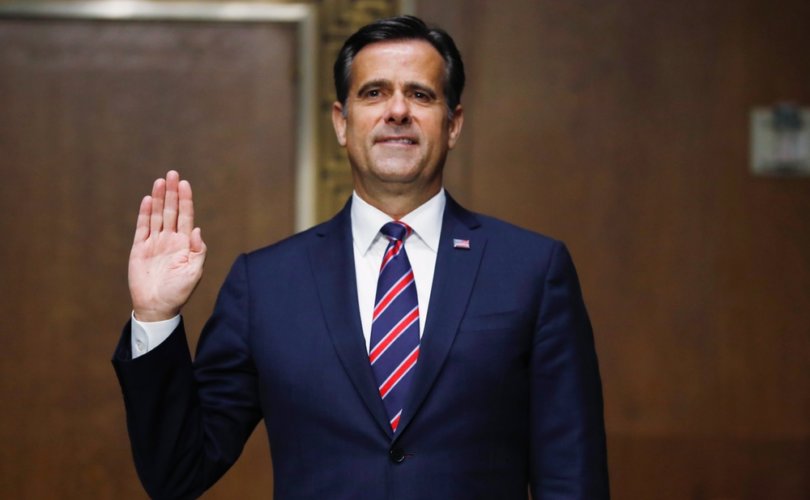 WASHINGTON, D.C., December 5, 2020 (LifeSiteNews) — John Ratcliffe, the Director of National Intelligence, warned in a CBS News interview on Thursday that China is trying “through blackmail, bribery, overt and covert operations” to influence legislators to pass “only laws that are favorable to China.”

“I was so troubled by what I saw from the position as the Director of National Intelligence that I went and briefed both the House and Senate Intelligence Committees on this information, which they found surprising and troubling,” he added, referring to a piece he wrote for The Wall Street Journal, also on Thursday.

Director of National Intelligence John Ratcliffe tells @CBS_Herridge that China is using blackmail, bribery and covert influence to target members of Congress and make sure “only laws that are favorable to China are passed” https://t.co/zloXmJ4vmk pic.twitter.com/s3fb1m7359

“If I could communicate one thing to the American people from this unique vantage point” as Director of National Intelligence, Ratcliffe wrote, “it is that the People’s Republic of China poses the greatest threat to America today, and the greatest threat to democracy and freedom world-wide since World War II.”

Beyond that allegation, however, he focused his piece on China “[robbing] U.S. companies of their intellectual property, [replicating] the technology, and then [replacing] the U.S. firms in the global marketplace.”

Ratcliffe, who was nominated by President Donald J. Trump to his position only this summer, mentioned several examples of successful Chinese attempts to steal “research-and-development secrets.”

“Until the head of Harvard’s Chemistry Department was arrested earlier this year, China was allegedly paying him $50,000 a month as part of a plan to attract top scientists and reward them for stealing information,” the Director of National Intelligence pointed out. “The professor has pleaded not guilty to making false statements to U.S. authorities.”

“Three scientists were ousted in 2019 from MD Anderson Cancer Center in Houston over concerns about China’s theft of cancer research. The US government estimates that China’s intellectual-property theft costs America as much as $500 billion a year, or between $4,000 and $6,000 per U.S. household.”

“This is our once-in-a-generation challenge. Americans have always risen to the moment, from defeating the scourge of fascism to bringing down the Iron Curtain,” Ratcliffe concluded. “This generation will be judged by its response to China’s effort to reshape the world in its own image and replace America as the dominant superpower. The intelligence is clear. Our response must be as well.”

In his CBS news interview, Ratcliffe said China has threatened the American way of life, for instance regarding the coronavirus, which “is a result of the actions of the Chinese Communist Party.”

“They’re just beginning,” he warned. “It’s going to get worse. They want to set the rules in the world marketplace under authoritarian regimes that don’t respect liberty, that don’t respect privacy, where the government comes first, and individual liberties are sacrificed.”

Director of National Intelligence John Ratcliffe’s message to Biden on China: “It’s the greatest threat that this country has faced since World War II…This generation’s challenge is China’s intent to replace the United States as the world’s superpower” https://t.co/OPB1QcOORN pic.twitter.com/6Kbzgmau2c

Ratcliffe’s comments about China approaching legislators to pass laws favorable to the communist country come after allegations that the family of former Vice President Joe Biden — the possible next president despite allegations of widespread voter fraud — “wanted to form a new entity with CEFC to invest in infrastructure, real estate, and technology in the US and around the world.” The new entity was called SinoHawk Holdings.

According to The Wall Street Journal, the founder and chairman of CEFC China Energy “had a background in military intelligence, was in the midst of a rapid, well-funded global expansion that often made investments that dovetailed with the priorities of China’s president, Xi Jinping, and his global program to build infrastructure.”

Tony Bobulinski, the former business associate of the Biden family and CEO of SinoHawk Holdings, “accused former Vice President Joe Biden of being directly involved in a plot to make millions of dollars, identifying … him as ‘the big guy’ named in the May 13, 2017, email.”

“That email showed the four partners each getting 20 percent shares in the business, with 10 percent going to ‘Jim’ and the remaining 10 percent ‘held by H for the big guy,’” reported the New York Post.