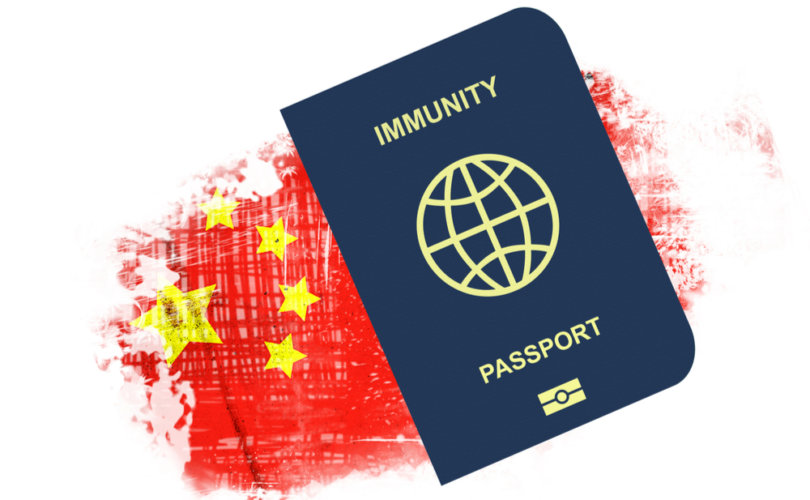 BEIJING, China, March 12, 2021 (LifeSiteNews) — The communist state of China has called on the World Health Organization (WHO) to allow the country to lead the way in developing a global vaccine passport, which would control freedom of movement for the world’s population, in much the same manner as China’s current system of social credit.

Chinese state-sponsored news network Global Times wrote on March 9 that China would “support [the] WHO on setting up [a] vaccination mutual recognition platform.”

The Global Times reported that Chinese “experts” would be happy to share their “experience” and “technical support” with the WHO, “as China is the most experienced country in using a health code system in the world,” the WHO being “the most proper organizer for the matter to ensure independence, fairness and data security.”

However, the full text of the article revealed reticence, at least publicly, from the WHO about the project. It referred to a press conference given by Dr. Michael Ryan, director of the WHO Health Emergencies Program, in which he mentioned the “real practical and ethical considerations” about using vaccine passports.

Notwithstanding Ryan’s public concern about the use of such passports, the Times advertised China’s capability in the area, saying it could be brought into use internationally “within 2-3 months and, optimistically, can be used for the Tokyo Olympic Games scheduled between July 23 and August 8.” China itself could build an “international platform in just one week,” added Xiang Ligang, the director-general of Beijing-based Information Consumption Alliance.

But Xiang noted how it would be “better that the WHO, rather than any country or regional organization, be the organizer to ensure the independence, fairness and data security of the platform.”

While the WHO could “draft the rules, procedures and data format,” China was well equipped and ready to effectively build the platform, roll it out and enforce it, Xiang continued. “China is very willing to provide support in sharing experience and techniques in setting up such a platform as the country has rich experience in this and has realized data sharing between the health code platforms of different Chinese provinces and regions.”

He declared that a Chinese partnership with the WHO would marry global promotion with “mature technology,” believing that it would also secure the public trust.

The comments were made as China launched its own vaccine passport via the social media platform WeChat. In addition to recording the user’s health information, vaccination status and COVID test results, the passport app also tracks the user’s location.

Yet, despite China launch of its own vaccine passport, and calling for global passports, the country’s “health experts” have ridiculed the European Union’s (EU) plan for vaccine passports. They argued that the plan would fail due to new variants of COVID arising, the vaccines would not be effective enough, and thus vaccine passports would be meaningless.

The attack on the EU scheme seems entirely political and reveals China’s desire for ever-increasing global influence, as it seeks to be the orchestrator and designer of vaccine passports for the entire planet.

Chinese President Xi Jinping has been calling for a Chinese-run vaccine passport for some time. Back in November 2020, he spoke to a virtual G20 summit, calling on the countries there represented to follow China’s lead in producing and using vaccine passports. Xi declared that COVID-19 had “exposed the deficiencies of global governance,” urging global leaders to submit to China’s plan for global tracking and surveillance.

Responding to Xi in November, the director of Human Rights Watch, Kenneth Roth, tweeted: “Beware of the Chinese government’s proposal for a global QR code system. An initial focus on health could easily become a Trojan Horse for broader political monitoring and exclusion, akin to the dangers associated with China’s social-credit system.”

— Article continues below Petition —
PETITION: No to mandatory vaccination for the coronavirus
Show Petition Text
1082131 have signed the petition.
Let's get to 1100000!
Thank you for signing this petition!
Add your signature:
Show Petition Text

The experience and mature technology, of which China recently boasted, refers to its social credit score system. For a number of years, the totalitarian state has been implementing a social credit system, which essentially bans citizens from aspects of daily life, depending on their record and credit score. Numerous local versions exist, but the overall government version seeks to incorporate national records, so that anyone who runs a red light, or spends too much time playing computer games (for example) is given a low score.

The credit score builds a new caste system, leading to the phenomena of the laolai, who are those who have been declared “untrustworthy” by the Chinese Communist Party. The founder of the Population Research Institute and regular LifeSiteNews columnist, Steven Mosher, described how the laolai are excluded from decent jobs, buying a house, or even taking fast public transport. Geographical data about the laolai is also available, so that they can be avoided by those deemed to be more trustworthy in the Chinese state.

“What it will actually create, of course, is a culture of fear and a nation of informants,” Mosher commented. “As the state progresses ever closer toward its goal of monitoring all of the activities of its citizens 24 hours a day, seven days a week, society itself becomes a virtual prison.”

China boasted recently that the social credit system now covers 1.1 billion people. Back in May 2019, Global Times released a similar boast about how “13.49 million individuals have been classified as untrustworthy and rejected access to 20.47 million plane tickets and 5.71 million high-speed train tickets for being dishonest.”