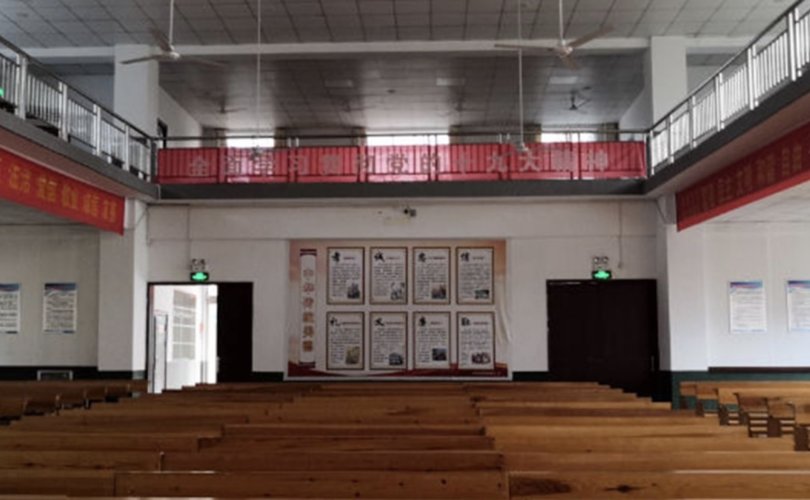 The Ten Commandments provide the Christian moral code and the foundation of belief for Christians around the world. In atheist China, they are being eliminated from places of worship, according to Bitter Winter, an online magazine centered on religious liberty and human rights in China.

Authorities issued orders to remove the Ten Commandments to every state-registered “Three-Self” church and meeting venue in one county of Luoyang, a prefecture-level city in the Henan province, according to a report from Barnabas Aid, an international Christian aid agency. The move was part of the government’s ongoing campaign to “Sinicize” (make Chinese) Christianity, the report said.

The Three-Self Patriotic Movement is a state-sanctioned Protestant church in mainland China.

Churches that refused to comply were shut down or told that their members will be “blacklisted,” meaning the Christians’ travel, education and employment will be restricted by authorities.

The pastor of a state-registered church said the replacement of the Ten Commandments with excerpts from Xi Jinping’s speeches was another case of pressure against churches, which has included the forced replacement of crosses with the national flag and installation of surveillance cameras for monitoring congregations and religious activities.

Last November, authorities ordered a registered church in Dongcun village of the Henan province to erase the First Commandment, “You shall have no other gods before me,” from the Ten Commandments displayed in front of the pulpit, calling it “national policy.”

An official of the “patrol inspection team” told the church’s leaders and its members that “Xi Jinping opposes this statement. Who dares not to cooperate? If anyone doesn’t agree, they are fighting against the country.”

“This is a national policy,” the official warned the believers. “You should have a clear understanding of the situation. Don’t go against the government.”

“Back in August, the church’s cross was forcibly dismantled by the government,” an anonymous Christian believer said. “Now, the Ten Commandments have been converted into the ‘Nine Commandments.’ In China, practicing your faith is difficult.”

“They are trying to corrupt our faith and make us betray God,” another lamented.

Additionally, the words Bible, God, and Christ were removed from “Robinson Crusoe” and other classic novels featured in a new Chinese school textbook.

The Pew Center estimated in 2011 that there are nine million Catholics on the mainland, 5.7 million of whom are affiliated with the Chinese Patriotic Catholic Association (CCPA).

There are 93 million to 115 million Protestant Christians living in China, which has an overall population of 1.3 billion, and some estimates say by 2030 that China may have the largest Christian population in the world.

Children under 18 years of age are barred from entering churches for religious services in China, and the regime has banned the sale of Bibles online.

Catholic bishops and priests not subscribing to government’s CCPA can be taken into custody for interrogation and indoctrination.

Last year’s Vatican-China deal, roundly denounced as a betrayal of Chinese Catholics who have suffered under the communist regime for years, concedes appointing bishops to the Chinese government with the pope retaining only a veto, and the Vatican agreeing to admit to communion and consecrate seven of the Chinese Communist Party’s bishops.

The Jinping quotes posted to replace The Ten Commandments included excerpts of the Communist leader’s May 2015 speech at a Central working meeting of the Chinese Communist Party’s United Front Work Department:

The core socialist values and Chinese culture will help to immerse various religions of China. Support religious community in interpreting religious thought, doctrines, and teachings in a way that conforms with the needs of the progress of the times. Resolutely guard against the infiltration of Western ideology, and consciously resist the influence of extremist thought.

The Chinese state has a new version of the Bible revised by the Chinese Communist Party (CCP), and have required that “core socialist values” be taught as doctrine in all churches.

The Ten Commandments are also being replaced with portraits of Chinese Communist Party founder and Chairman Mao Zedong and Xi Jinping, along with Communist propaganda in other areas of the country, the Bitter Winter report said.