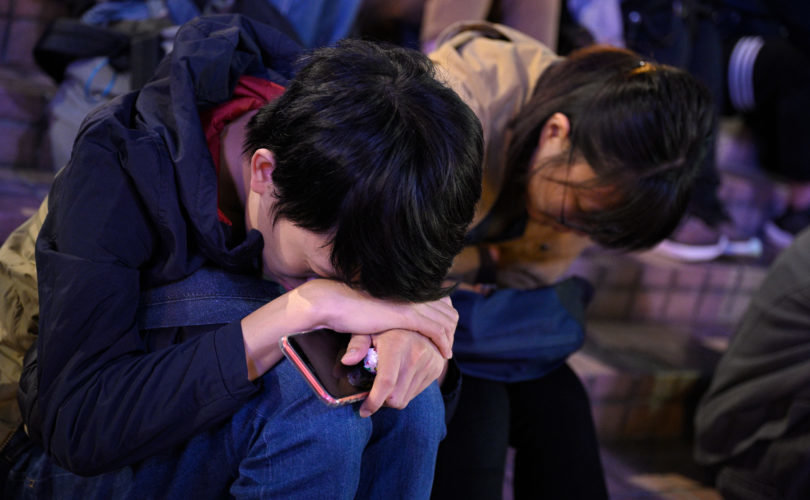 April 12, 2021 (LifeSiteNews) – The Chinese government is ramping up a campaign of mass torture and detainment of Christians and other religious minorities while Pope Francis remains characteristically silent.

A recent report by Radio Free Asia (RFA) revealed that Christians in China are being detained in mobile “transformation” facilities and subjected to brainwashing, torture, and other violent measures to coerce them into renouncing their faith.

A member of a Protestant “house church” in China’s Sichuan province, referred to by the pseudonym Li Yeuse, told RFA that he was extra-judicially detained in a facility overseen by the Chinese Communist Party (CCP) for more than 10 months. Agents with the CCP’s United Front Work Department held Li in detention after his church was raided two years ago, he said.

“It was a mobile facility that could just set up in some basement somewhere,” Li said of the detention center. “It had its own (CCP) political and legal affairs committee working group, and they mainly target Christians who are members of house churches.”

Li said that he was confined in a room without windows or ventilation and was repeatedly beaten and psychologically tortured during his months-long internment. “They threaten, insult and intimidate you. These were United Front officials, men, women, sometimes unidentified, usually in plain clothes. The police turn a blind eye to this,” he recalled.

“You have to accept the statement they prepare for you,” Li continued. “If you refuse, you will be seen as having a bad attitude and they will keep you in detention and keep on beating you.”

Li’s fellow prisoners, most of whom had been detained for Christian activities, often contemplated suicide and committed acts of self-harm as a result of the continuous abuse, Li related.

“I couldn't sleep; after you've been in there a week, death starts to look better than staying there,” he said.

Another anonymous Christian told RFA that similar detention programs targeting Catholics, Protestants, and Falun Gong practitioners have been deployed throughout China. A lawyer surnamed Zhang, who said he has represented several Catholic detainees, also reported that the CCP has been simply “disappearing” Catholics rather than prosecuting them.

“After the religious affairs officials had arrested the bishops and priests, they didn’t pursue criminal charges – they just disappeared them, sometimes for five, six or even 10 years at a stretch,” Zhang said. “Some were sent back home after five or six years, and that was how people learned about the brainwashing centers – from their accounts.”

The atheist Chinese Communist government has continued to harass and arrest Catholics despite the reauthorization of the Vatican’s widely-condemned 2018 deal with China last year. The secret agreement, which authorizes Beijing to appoint and replace bishops, allegedly prohibits coercion of Catholic clergy.

Radio Free Asia’s latest revelations follow weeks of reports of other heightened attacks on Christians in China. Since February, the Chinese government has introduced militant bans on “house churches,” mass arrests of bible study groups, new demolitions of Catholic shrines, and a centralized surveillance system for clergy. Human rights organizations and hundreds of Chinese Christian leaders have called the ongoing persecution the worst affront to religious liberty in the country since the Cultural Revolution.

Beijing’s crackdown on religious groups also has extended to the largely Muslim ethnic Uighurs in the Xinjiang province of China. The Chinese government has interned up to three million Uighurs across hundreds of detention camps, killing some prisoners and forcing others to undergo abortions. Hundreds of thousands of Uighur women may have been subjected to involuntary sterilization and systematic sexual abuse during the ethnic cleansing of Xinjiang, which the United States has formally denounced as genocide.

China’s genocidal crimes against millions of religious minorities nevertheless have been met with continuous silence from the highly political, normally outspoken Pope Francis.

“Pope Francis, in particular, speaks almost every week at the Sunday Angelus, and on many other occasions, about issues of injustice in the world,” Rahima Mahmut, U.K. director of the World Uighur Congress, has said. “Yet there is one country whose human rights record he has not highlighted — China.”

“Until now, not a word of prayer or solidarity for the repressed peoples of China has passed his lips publicly,” human rights advocate Benedict Rogers wrote last fall. Pope Francis briefly noted the “poor Uighurs” in a book released in December, although he again ignored them and other persecuted Chinese peoples in his homily last Christmas.

The Argentinian pontiff reaffirmed his pattern of silence on China last month in his Easter message, and again on Divine Mercy Sunday (which is called Low Sunday in the Old Rite calendar), on which he celebrated Mass flanked by dozens of foreign refugees.

The pope repeatedly has defended the CCP’s human rights record, claiming in an interview in 2017 that “(i)n China the churches are full.”

“You can practice your faith in China,” he said. Francis downplayed Beijing’s brutal, dictatorial takeover of Hong Kong in December as well, calling the crackdown part of a “generalized thing,” comparable with violet protest movements in France.

Critics have noted that billions of dollars of alleged Chinese payments to the Vatican could account for Pope Francis’s conspicuous silence. Others have pointed to his well-documented Communist sympathies and to his coveted agreement with Beijing. The Vatican-China deal has been credited with aggravating abuses against Chinese Catholics, and even Francis has admitted that many Catholics “will suffer” under the agreement.