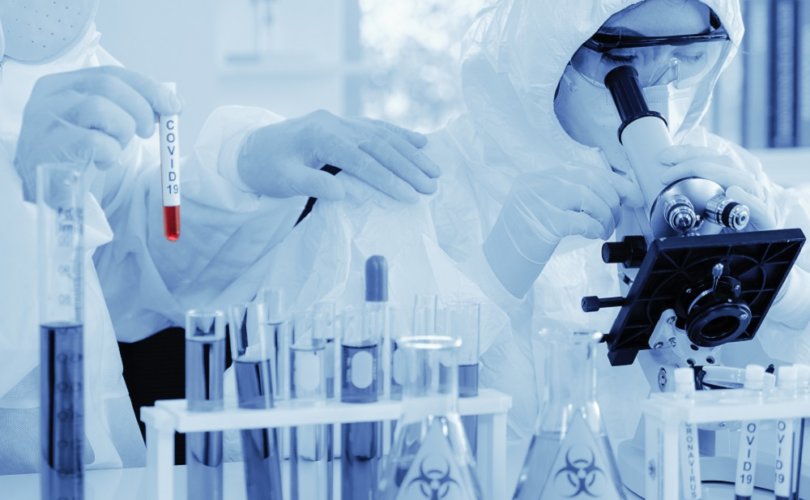 ONTARIO, July 17, 2020 (LifeSiteNews) — A Canadian human trial of a Chinese coronavirus vaccine derived from fetal cells harvested from an aborted baby decades ago has been hindered due to Chinese customs delaying its shipment to Canada.

The delay of the vaccine known as Ad5-nCoV, which LifeSiteNews reported uses the HEK293 cell line made from fetal cells from a baby aborted decades ago, was first reported by iPolitics last week.

In May, prime minister of Canada Justin Trudeau announced that Health Canada had approved the coronavirus vaccine Ad5-nCoV to be used in human clinical trials.

According to iPolitics, Health Canada said Chinese customs officials are the ones responsible for delaying the shipment of the trial vaccine Ad5-nCoV.

Ad5-nCoV was co-developed by the Beijing Institute of Biotechnology and the Chinese firm CanSino Biologics Inc. (CanSinoBIO).

On May 12, Canada’s National Research Council (NRC) announced a collaboration with CanSinoBIO to test and develop Ad5-nCoV in Canada.

The clinical trials for Ad5-nCoV will be taking place at the Canadian Centre for Vaccinology at Dalhousie University, which is in Halifax. A total of 600 people are to be tested.

The iPolitics report says a spokesperson for the University of Dalhousie would not answer questions about the shipping delay.

They could not confirm if the delay was because of the increased political tension between Canada and China due to the extradition case of Meng Wanzhou, an executive from the Chinese telecommunications company Huawei who is under house arrest in British Columbia.

Meng was arrested by Canadian officials in 2018 at the request of the United States Justice Department, who accused her of violating Iranian sanctions. The U.S. wants Meng extradited to face charges.

Shortly after Meng’s arrest, a former Canadian diplomat, Michael Kovrig, and businessman Michael Spavor were arrested in China, which has fueled speculation that the communist Chinese regime did this as a retaliatory measure simply to exert pressure on Canada to release Meng.

Meng and the Chinese government have denied any wrongdoing and have demanded her release.

Canadian prime minister Justin Trudeau has declined to release Meng and has admitted that there was a “direct link” between Meng’s arrest and that of the two Canadians in China.

Last month, China charged the two Canadians held in custody with spying. In June, Trudeau said that “we deplore what China did.”

Due to the vaccine delay, it remains uncertain when the trial will get underway. However, a CTV report says Health Canada told reporters that once Chinese authorities allow the vaccine to be shipped, trials will begin after they arrive in Canada.

“Once the Canadian Center for Vaccinology receives the vaccine candidate it will start the clinical trial for CanSino, under the regulatory supervision of Health Canada,” said Andre Gagnon, a spokesman for Health Canada, to CTV News.

According to the iPolitics report, Dr. Scott Halperin, the director of the Canadian Centre for Vaccinology at Dalhousie University, told M.P.s that the trial is “imminently going to start.”

“Just finishing the final approvals that are required to have the vaccine shipped to Canada,” said Halperin.

On Thursday, Trudeau said in a press conference that Canada is still working with China on the Ad5-nCoV vaccine.

“We’re obviously continuing to work with the Chinese government to ensure that this work can continue in an uninterrupted fashion,” Trudeau told reporters.

In June, China approved Ad5-nCoV to be used for its military for one year and skipped the final phase of testing for the vaccine.

Ted Kuntz, president of Vaccine Choice Canada (VCC), a not-for-profit society founded by families who have suffered from vaccine reactions and injuries, told LifeSiteNews in May that Canadians should be concerned about the safety of the coronavirus trial vaccine.

“The decision by Health Canada to approve human trial testing for a SARS-CoV-2 vaccine should concern us all,” Kuntz said.

“Bypassing standard and prudent safety protocols and rushing a vaccine to market not only increases the risk of producing a product that will cause more harm than good, it has the very real potential to severely undermine trust in our health professionals, our health agencies, and in the entire vaccine paradigm.”

Huawei was hoping to be a prominent player in a bid to be a major part of Canada’s 5G network, but recently, both Bell and Telus have said they will partner with Nokia and Ericsson instead.

Canada remains the last country of the Five Eyes Intelligence Alliance not to officially announce its refusal to work with Huawei. All of the four other members, the U.S., Great Britain, New Zealand, and Australia, have stopped Huawei from supplying 5G equipment.

A report two months ago by the Five Eyes Intelligence Alliance said China deliberately lied about the coronavirus outbreak and deliberately allowed it to spread globally.

In an email message sent to his followers this week, the Conservative Party of Canada leadership candidate and M.P. Derek Sloan blasted Trudeau for not following the lead of the other four nations in banning Huawei.

“The fact that Canada is now the only country in the Five Eyes to have not taken action to mitigate the security risk of using Huawei in our 5G network is an abject failure on the Trudeau government’s part to protect our national security,” wrote Sloan in his email.

“The government should announce sooner, rather than later, that Huawei will be banned[.] … As Prime Minister, I will not allow Huawei 5G in Canada.”