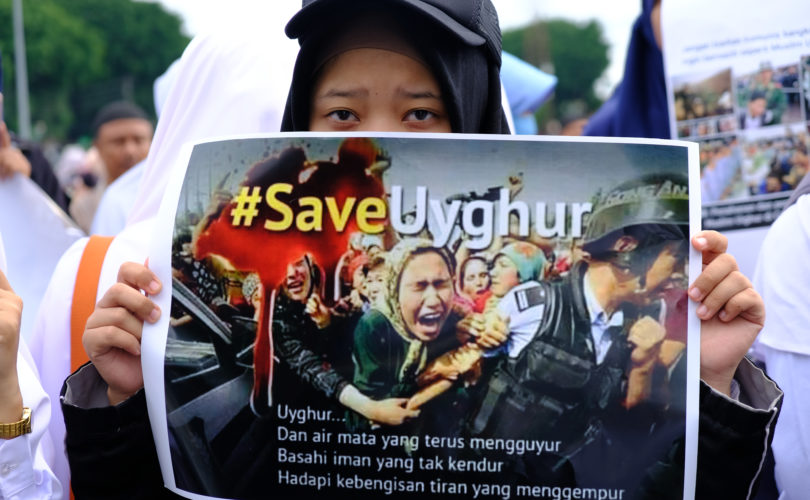 LONDON, England, June 14, 2021 (LifeSiteNews) —An independent tribunal in London, convened to investigate ‘ongoing atrocities and possible genocide’ in China, is bringing to light horrific stories of torture inflicted on Uyghurs and other Turkic Muslims.

A former Chinese police officer now exiled in Germany, who participated in the arrest of the minorities, composed mostly of Uyghurs, explained in his statement that they “are tortured to remove all disagreement.”

“After the worst treatment, they will completely obey and be in line with the Party. They will have no thoughts of their own left,” explained the whistleblower under the pseudonym Wang Keizhan.

He explained how thousands of Chinese police recruits, often with little professional training, are enticed by “very high salaries” to work in Xinjiang, where they are taught to view Uyghurs as enemies of the state.

“Many of my fellow police officers were ready to accept these explanations to repress the Uyghurs. This is because they believed that, even if a Uyghur had not yet committed any terrorist offenses, it was only a matter of time before they do.”

This meant that the officers could get away with about any method of torture they could think of, as Keizhan revealed: “Uyghur prisoners were sometimes forced to kneel, punched, a plastic bag would be tied over their head in order to induce suffocation and the bag would only be removed when they begin struggling to breathe. Sometimes, their limbs were tied, and waterpipes were inserted in their mouth to force water into their lungs.”

He continued: “This was done in order to force Uyghurs to reject their religion and to confess that they had committed the crimes they were accused of. They were forced to sign confessions to admit that they are terrorists and also to ‘denounce’ and provide a list of their relatives and friends as being terrorists.”

No real grounds were needed for forcing people into camps, according to Keizhan. “Very often, I noticed that the criminal charges against Uyghurs were just pretexts for arrest – for instance, because they sent / received money internationally.”

“The reason for these arrests included that they might have had a knife at home or because they were showing their cultural identity, or they were somehow considered to have a different ideology. In some villages in Xinjiang, the whole population of a village was taken to the concentration camps,” he said.

Omir Bekali, a Kazakhstan resident who was taken into custody while seeing family in China during a business trip, affirmed during his tribunal testimony that accusations of terrorism were levied against camp inmates. He discussed how he was tortured in an attempt to force him to accept three crimes: “instigating terrorism, organizing terror activities, and covering up for terrorists.”

“They hung me from the ceiling. They chained me to the wall and beat me with plastic, wooden, electric batons and metal wire whip. They pierced needles under my nails,” said Bekali, who estimated that his camp of more than 10,000 men contained about 70 percent to 80 percent Uyghurs and 20 percent to 30 percent Kazakhs.”

While Bekali revealed that he and other prisoners were made to sing “red songs” and “constantly learnt political lessons,” he said in his statement, “I thought we were brought here to be killed, not to be educated.”

He explained that a man in the cell next to his “died of severe torture,” and that the 26-year-old nephew of “the deputy head of the municipal police also died of torture in the camp.” After this, “the camp remained silent for a month.”

Keizhan shared in his report that he believes these minorities are being “targeted by the Chinese government in order to implement China’s ‘One China’ policy.”

Keizhan’s belief that “the Chinese government wants to destroy the identity of Uyghurs and promote Han Chinese identity” is supported by other testimonies that the government is “forcibly transferring” the children of Uyghur camp inmates to the care of the state in order to “assimilate” the children. This is reportedly occurring even when the children have relatives who can care for them.

One testimony claims that inmates were punished for speaking Uyghur, and would be fed only if they spoke Chinese.

China officials have claimed that the tribunal’s allegations are false, insisting that the camps — which they say are now closed — are “vocational training centers to teach Chinese language, job skills and the law,” the Associated Press reported.

“There is no such thing as genocide or forced labor in Xinjiang,” the region’s government spokesperson, Elijan Anayat, told AP reporters. “If the tribunal insists on going its own way, we would like to express our severe condemnation and opposition and will be forced to take countermeasures.”

“If it were realistically possible to bring the People’s Republic of China (PRC) to any formal international court – in particular to the International Court of Justice (ICJ) – there would be no need for the establishment of a people’s tribunal,” states the Uyghur Tribunal site.

“The Uyghur Tribunal, which has no powers of sanction or enforcement, will confine itself to reviewing evidence in order to reach an impartial and considered judgment on whether international crimes are proved to have been committed by the PRC,” the site further states.

The tribunal was chaired by barrister Sir Geoffrey Nice, who led the United Nations’ prosecution of the former Serbian President Slobodan Milošević at The Hague, at the request of the World Uyghur Congress.

Keizhan gave one of more than 30 statements testifying to human rights abuses perpetrated by Chinese government officials during the proceedings.

The tribunal’s next hearings will take place in September.