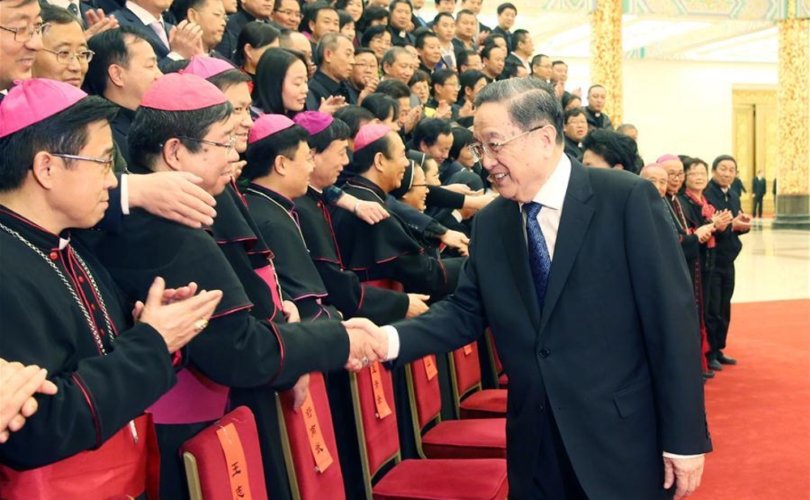 CHINA, September 28, 2018, (LifeSiteNews) – In a move that quickly cast a dark shadow over Pope Francis’ “provisional agreement” with Communist China, the government-approved Chinese Patriotic church declared its “independence,” stating that it will remain loyal to the Communist Party.

The declaration came just a few hours after the agreement was reached between the Holy See and the communist regime. The country’s communist regime has long suppressed and persecuted the underground Catholic Church which has remained faithful to Rome.

The press release issued by the Patriotic Association of Chinese Catholics and the Council of Bishops of the Church of China — neither of which have been recognized by the Vatican — that “The Chinese Catholic Church ‘will continue to operate independently,’” according to a report by AsiaNews.

“Independence” suggests independence from Rome’s authority, and “sinicization” refers to the process where foreign influences within China are made more compatible with Chinese culture.  In reality, however, sinicization has become the government's attempt to co-opt Christianity.

Asia News editor-in-chief, Fr. Bernardo Cervellera, said in a published analysis that some worry the new agreement transforms the Church into a “party instrument.” He wrote:

Two days after what so many have called a ‘historic agreement’ between China and the Holy See on the appointment of bishops, attempts to understand and evaluate its scope continue. The sober announcement of the Vatican Press Office – while all the journalists were busy elsewhere, on Pope Francis' journey to Lithuania – was greeted with a mix of optimism and dark pessimism.

Among the optimists, the adjective “historic” abounded, forgetting that the agreement has been labelled “provisional”, subject to “periodic evaluations”, and that the Holy See Press Office director spoke of the “beginning” of “a process” and not of its “end”.

For the pessimists, it is “the beginning” of a total sell out of the Chinese Church to the State which, as is already the case, will do what it wants, that is,  transform it into a Party instrument. They also point out the silent suffering that Catholics official and unofficial have had to bear for almost 70 years.

“There is disillusionment and sadness because some of these reconciled bishops are known to have lovers and children and to be ‘collaborators,’” added Fr. Cervellera.  “Many others wonder if the reconciled bishops will express a public request for forgiveness before the people they have scandalized with their ‘independent’ action.”

Fr. Cervellera also drew attention to a glaring omission of the Vatican’s announcement of the agreement with the Chinese communist regime:

As our news agency has borne witness to many times on recent occasions, in the name of “sinicization”, crosses are burned and destroyed, churches demolished, faithful arrested and young people under 18 years banned from worship and religious education in China.  In addition there are bishops and priests who have disappeared in police custody; bishops under house arrest; unofficial bishops considered as criminals; checks of all kinds in community life.  Added to all of this is the persecutions to which other religious communities are subject (Buddhist, Taoist, Muslim, …), which show the negative view that China has of religions, and its plan to assimilate or destroy them.

This makes the provisional agreement look like a strange result, a little unexpected and temporary, without a future, because it casts a shadow of suspicion on the interlocutor with whom the Holy See has decided to dialogue. Comments from China express satisfaction with the agreement, but also sadness because the Chinese do not trust their political authorities.

After the agreement with the Chinese government was announced, Vatican Secretary of State Cardinal Pietro Parolin, one of its chief negotiators, said: “For the first time all the Bishops in China are in communion with the Bishop of Rome, with the Successor of Peter. And Pope Francis, like his immediate Predecessors, looks with particular care to the Chinese People.”

Last week, Cardinal Joseph Zen of Hong Kong, who has been a fierce critic of a deal with China, accused Parolin of an “incredible betrayal” of the Church in China, and said he should resign.

“They’re giving the flock into the mouths of wolves,” Cardinal Zen said in the run-up to the diplomatic agreement between the Vatican and Communist Beijing.

“The consequences will be tragic and long lasting, not only for the church in China but for the whole Church because it damages the credibility,” he added.

According to its 2017 Annual Report issued by the United States Commission on International Religious Freedom, “In 2016, the Chinese government continued its campaign to remove crosses and demolish churches.”

“Since 2014, authorities have removed crosses or demolished churches at more than 1,500 locations in Zhejiang Province alone,” continues the report. “During 2016, Chinese authorities arrested Christians for displaying the cross in their homes and printing religious materials, threatened parents for bringing their children to church, and blocked them from holding certain religious activities.”

Embedded deeper in the official report, one comes across disturbing allegations of imprisonment and violence against China’s religious minorities, some of whom have become a source for organ harvesting. “Organ donors often are nonconsenting, particularly executed Falun Gong prisoners and detainees, though individuals from other faiths also have been targeted, such as Uighur Muslims, Tibetan Buddhists, and Christians.”