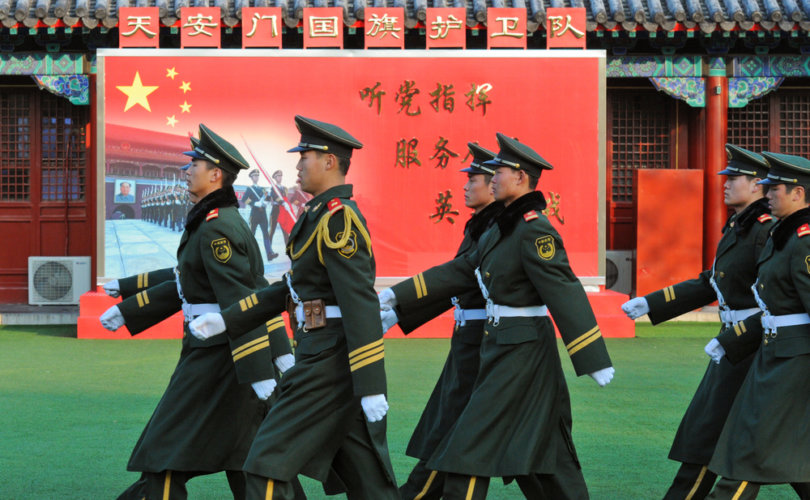 BEIJING, China, January 5, 2021 (LifeSiteNews) — Chinese President Xi Jinping has issued an order directing the military to begin “preparing for war” in his first statement to the Chinese armed forces of 2021.

The new statement echoes numerous earlier commands of the Chinese president to the People’s Liberation Army (PLA), the armed forces of the Chinese Communist Party (CCP), to likewise “prepare for war.” In October and May of last year, Xi called on the PLA to “put all minds and energy on preparing for war,” and to “explore ways of training and preparing for war.” Going back to 2019 Xi ordered the PLA to “prepare for a comprehensive military struggle,” and again in 2018 we hear the mantra as Xi commanded the army to “prepare for war.”

The Central Military Commission (CMC), headed by Xi, has expanded its powers over the army “to mobilise military and civilian resources in defence of the national interest, both at home and abroad” after a new law came into effect on January 1, according to the South China Morning Post. The new National Defence Law centralizes more power over the military into the hands of the CMC and away from China’s cabinet, known as the State Council.

The new powers give more authority to Xi, who is already general secretary of the CCP as well as chairman of the CMC and president of the Chinese Republic.

Alongside “preparing for war,” Chinese state media Xinhua News Agency reports that Xi ordered the PLA to “deepen the transformation of military training, build a new type of military training system, and comprehensively improve the level of combat training and ability to win.” He also emphasized the need for “full-time combat readiness,” as they could be asked to “act at any second.”

Xi also focused on the need for an expansion in the use of technology in training and on the battlefield, declaring it a “core idea in combat effectiveness.” He added that the PLA should “increase the integration of new equipment, new forces and new combat realms into training and combat systems.”

The PLA must “resolutely implement” the new techniques to honor the 100th anniversary of the CCP’s founding on July 1 this year with “excellent performances,” he said, adding that the army must “carry forward the spirit of fighting without fear of hardship or death.”

The Heritage Foundation reported in March 2020 that the Chinese government has increased its military spending over the last 30 years by over 4,000%. The author of the report, Frederico Bartels, caveats the findings by noting the notorious lack of transparency from the CCP on its military investments. This can be seen in Beijing’s latest reported military spending of $178 billion in 2020, which would be about 25% of the U.S. military budget; the Epoch Times reports that the number is actually closer to about 87% of America’s military spending.

China was engaged in one of its worst conflicts in decades during 2020. The disputed territory in China’s southwest region, a 2,100-mile-long road bordering India, saw more than 20 Indians killed and an unknown number of Chinese casualties. The Indian media claimed that between 30 and 40 Chinese were killed, but this number has not been verified.

China has also stepped up its military presence in the South China Sea in recent years, conducting a number of naval exercises aimed at establishing control over the resource-rich waters. The South China Sea has many small islands not belonging to China, giving rise to disputed claims over the resources and heightened diplomatic tensions with Brunei, Indonesia, Malaysia, the Philippines, Taiwan, and Vietnam, all of which deny China’s outright sovereignty over the waters.

Last year saw a particularly marked increase in tensions between China and Taiwan, with China refusing to accept the island state as an independent country, rather considering it as a part of its own territory. China has since increased its military activities in the waters surrounding Taiwan, and performed fly-by operations. The Epoch Times reports that China “has never ruled out using force” against Taiwan, in order to establish political dominance.

While tensions rise between Taiwan and China, the U.S. has been establishing more friendly relations with the island nation on the Taiwan Strait. A number of substantial arms deals were formed with Taiwan last year, as well as heightened diplomatic relations, according to the Epoch Times.

President Donald Trump has blocked U.S. investment in Chinese companies which support the national army in an attempt to halt any American money from funding the PLA. The CCP uses a private-public investment strategy, called “civil-military fusion,” to access technological advancements across the private sector and incorporate them into the military. Trump has tried to stem any U.S. technology being shared by blocking Chinese graduate students from gaining visas to the U.S. if they have connections with the civil-military fusion initiative.

— Article continues below Petition —
PETITION: Support Cardinal Zen's plea to stop the "murder of the Church in China"
Show Petition Text
22106 have signed the petition.
Let's get to 25000!
Thank you for signing this petition!
Add your signature:
Show Petition Text

It is yet to be seen if Joe Biden would maintain such a strong stance on China, should he take office later this month. Former Mayor of New York Rudy Giuliani has said, regarding the accusations of the Biden family and their monetary ties to China, that “[t]he Biden Family is owned by the Chinese Communist Party.”

China expert Steven Mosher has pointed out that numerous American politicians are influenced by China in one way or another.

“John Ratcliffe, the director of national intelligence, warned in a December 3rd op-ed in The Wall Street Journal that Beijing was attempting to ‘dominate the world,’” he wrote. “He highlighted how Chinese spies pose a much bigger threat to the U.S. than any other country not only because of the sheer scale of the effort that the Chinese Communist Party is making, but also because of its scope. Chinese spies, using sex, drugs, and money as bait, not only carry out military and commercial espionage, they also compromise U.S. lawmakers for the purpose of reshaping U.S. foreign policy to favor Beijing.”

Even though China is one of the countries most hostile to Christianity, the Vatican made a secret deal with the Communist government. Cardinal Joseph Zen, the former bishop of Hong Kong, is the most prominent critic of the deal, calling it an “incredible betrayal.”