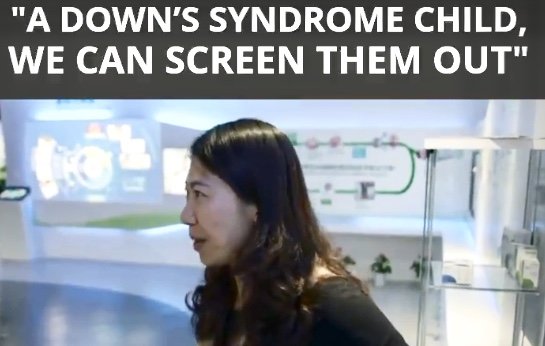 SHENZHEN, China, May 21, 2020 (LifeSiteNews) – A spokeswoman for a Chinese biotech company boasted that helping expectant parents around the world to “screen out” Down syndrome babies before they can be born is a “cash cow” for the firm.

A video clip from an Al Jazeera report, which one pro-life commentator has called “profoundly shocking,”shows a BGI Genomics representative proudly declaring, “We use our technology (to) avoid the birth of birth defect, like Down syndrome birth.”

“A Down syndrome child, we can screen them out,” she added. “We can avoid the birth of them.”

The unnamed spokeswoman explained that BGI has analyzed millions of blood samples from pregnant women “to test if the baby has Down syndrome or other chromosome disease.”

“This part is BGI’s, what we call ‘cash cow,’ making money to support the growth” of the other divisions of the company, including “nutrition, health, medical, insurance, everything,” she said, smiling broadly.

Testing for Down syndrome reportedly generates more than half of BGI’s revenues.

When one of her listeners suggested that her comment about “screening out” Down syndrome babies “seems really scary,” she remained silent and offered no response.

“Screening out” babies with Down’s syndrome is apparently a “cash cow” for this business. �� pic.twitter.com/1wIYlKMZxW

Profiting from discrimination and killing

“It’s difficult to know which is worse: the recognition that the little person being killed is a child or the clinical acceptance that the child can be ‘screened out,’” wrote Irish pro-life activist Niamh Uí Bhriain.

“The purpose of matching these aggressive screening programs with easily available abortion is obvious: to do exactly what was said in the video, and screen out people who have Down syndrome and other disabilities,” she continued.

“In other words, to kill them all before birth,” she added.

Others, especially parents of Down syndrome children, were equally aghast.

“She says ‘defect,’ I say ‘difference.’ That’s all it comes down to. And she had no answer to his questions about ethical implications,” remarked Vanessa Lindsey on Facebook.  “Maybe they should turn their attention to the seek and destroy of COVID-19, instead of perfectly wonderful human beings!”

“She obviously needs to be educated,” said Danielle Landers. “I’m a proud mother of a (Down syndrome) child and I wouldn’t change anything. She has labeled it as a disease. It is not a disease. It’s an extra chromosome.”

“How much money do they get to tell them to get rid of these beautiful babies that bring so much happiness to this world?” wondered Kate Brown.

“ Well, we knew this inside, people try to cover it in CHOICE. But really, no. It’s profiting from discrimination,” said Colette Lloyd on Twitter. “I actually feel sick.”

“The expression on her face at the end … She doesn’t seem to understand how someone can put ethics above money,” said Adrienne Nicholas in response.

UK’s Right to Life pointed out that this isn’t the first time the BGI group and its co-founding chairman, Wang Jian, have courted controversy:

In 2018, the businessman caught the media’s attention for saying in an interview it would be a “disgrace” for any of BGI Group’s 7,000 employees to have a child with a birth ‘defect.’

Wang said, “It would mean that we are fooling society and just eyeing others’ pockets.” He added that there are no known serious congenital diseases among the 1,400 infants that have been born to the company’s employees.

“In this shiny, fake and heartless future there’s no room, it seems, for the people who teach us the most important thing of all; how to love,” concluded Bhriain.