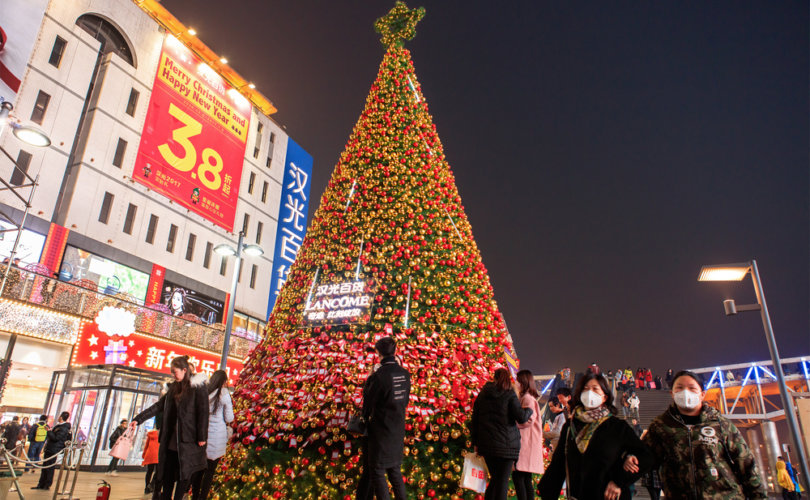 People hang Christmas wishes, written on strips of colored paper, on the branches of a Christmas tree at Xidan Shopping Center in Beijing, China.Shutterstock.com

LANGFANG, China, December 19, 2018 (LifeSiteNews) – A city in China has issued a sweeping ban on Christmas-related decorations, public celebrations, and advertisements, claiming it’s necessary to keep the city clean for an upcoming awards contest. Christmas is not an officially recognized holiday in the atheist, Communist state.

The state-run media outlet Global Times reports that the Urban Management Bureau of Langfang, a town in China's northern Hebei Province, has issued a notice prohibiting the sale and street display of Christmas trees, outdoor sales promotions or celebrations related to the holiday, Christmas-related advertising such as posters, banners, or light boxes, and even sales of holiday wares such as stockings and Santa Claus suits.

Public religious activities will not be banned, the report claimed, but must be “closely monitored and reported to senior authorities.” Urban Management Bureau employees are being tasked with inspecting Christmas-themed promotions, as well.

The Times quotes an unnamed Bureau employee as denying that government officials have any anti-Christmas agenda, but simply want to ensure that the city stays clean enough to win a strong rating for the upcoming National Civilized City award, which has been used as a justification for regulating a variety of personal behaviors in Chinese cities.

“Managing roadside stalls and migrant vendors is our routine work. Christmas is a time when such illegal activities are prevalent,” the employee claimed. For good measure, the report includes a picture of a debris-strewn street said to be the aftermath of a Christmas Eve party in Shaanxi Province.

A Chinese city near Beijing recently bans Christmas trees on streets, Christmas sales posters and banners, and outdoor performances. But local govt says it is to maintain a clean city environment for an upcoming awards competition. https://t.co/SWNKM9Lc5K pic.twitter.com/X8uz1URLib

The South China Morning Post reports that the actual notice was more ominous about its purpose, saying the crackdown is meant to “maintain stability” and urging citizens to report anyone “spreading religion” in parks and squares.

The Post adds that the news follows reports of Chinese officials ramping up persecution of Christians. Over the weekend, police stormed a children’s Bible study in the Guangdong province’s capital of Guangzhou; before that, they shut down a 1,500-member church in Beijing and a 500-member church in Chengdu. Officials also took approximately 100 Christians from their homes or from Chengdu streets in a series of raids.

Breitbart editor Frances Martel cast further doubt on the environmental justification, however, noting that the China Communist Youth League's Anhui declared last year that “Christmas is China's day of shame,” and citing commentary that bemoans Christmas as an example of the country’s “vulnerab[ility] to the widespread Western cultural imperialism.”