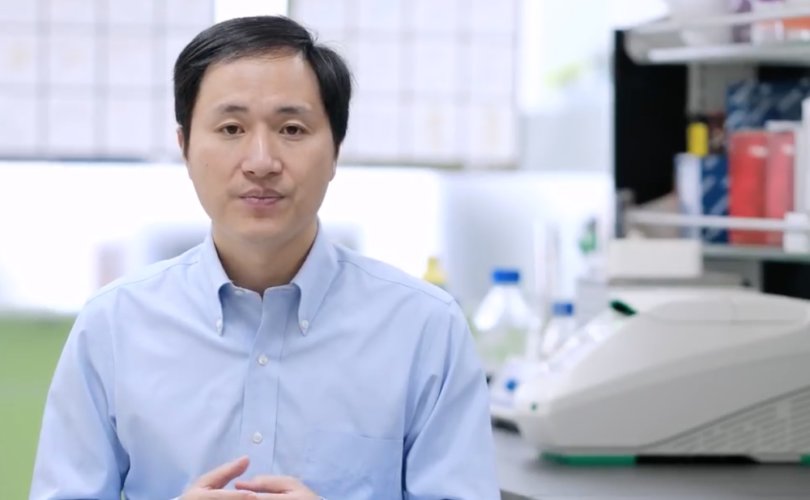 HONG KONG, November 26, 2018 (LifeSiteNews) – A Chinese researcher says he’s the first person to successfully “edit” the genes of babies before birth in a practice the United States bans as dangerous and unethical.

Leading a team at Shenzhen’s Southern University of Science and Technology, He Jiankui claims to have altered the embryos of seven couples during fertility treatments, the Associated Press reports, one of which gave birth to twin baby girls this month. The purpose of the experiment was to eliminate a gene (CCR5) in hopes of making the children resistant to diseases such as HIV, smallpox, and cholera.

The scientist announced the alleged feat in an interview with the AP and to organizers of a gene editing conference in Hong Kong. He refused to identify the parents or their location, and no scientific journal has independently verified his claims. An American scientist, Michael Deem of Rice University, also worked on the project.

“I feel a strong responsibility that it’s not just to make a first, but also make it an example,” He told the AP. “Society will decide what to do next” with the technology’s ethical ramifications.

The MIT Technology Review explains that Chinese researchers first modified embryos’ genes in a lab dish in 2015 using the gene-editing tool CRISPR-cas9, but He’s experiments would mark the first case of a successful birth from such experiments, if true.

“Data submitted as part of the trial listing shows that genetic tests have been carried out on fetuses as late as 24 weeks, or six months,” the Review notes. “It’s not known if those pregnancies were terminated, carried to term, or are ongoing.”

The CRISPR tool is a recently developed tool for adding necessary genes or disabling harmful ones to treat diseases in adults, though the U.S. only allows it to be used in lab research. “I think this is justifiable,” Harvard geneticist George Church said, calling HIV “a major and growing public health threat.”

But He’s alleged work traverses uncharted waters that are troubling to many ethicists. Using the new tool on sperm, eggs, or embryos means descendants will also inherit the changes. Some see the whole concept of gene editing as a moral slippery slope that could lead to designer babies and even a new form of eugenics.

“This is far too premature,” said Dr. Eric Topol of California’s Scripps Research Translational Institute said it was “far too premature” to be “dealing with the operating instructions of a human being.” Gene editing expert Kiran Musunuru of the University of Pennsylvania called it an “unconscionable” experiment and “not morally or ethically defensible.”

Fyodor Urnov, associate director of Seattle’s Altius Institute for Biomedical Sciences, expressed “regret and concern over the fact that gene editing—a powerful and useful technique—was put to use in a setting where it was unnecessary,” He called it a “hard-to-explain foray into human germ-line genetic engineering that may overshadow in the mind of the public a decade of progress in gene editing of adults and children to treat existing disease.”

There are also questions as to whether He’s team properly informed participants of the experiment’s nature, risks, and benefits. The AP says consent forms described it as an “AIDS vaccine development” program. He claims to have fully explained the experiment, and offered insurance coverage to any child conceived via the trials. Neither He nor Deem had prior experience with human clinical trials, however.

“We have not yet enacted any meaningful regulations or laws to guide the technology down safe and ethical paths, and away from those that could prove profoundly destructive both scientifically and culturally,” the Discovery Institute’s Wesley Smith warned Monday at National Review. “It is possible that scientists are creating genetically altered embryos, implanting them for gestation, and then aborting them to see how things worked out. Is everyone okay with that?”