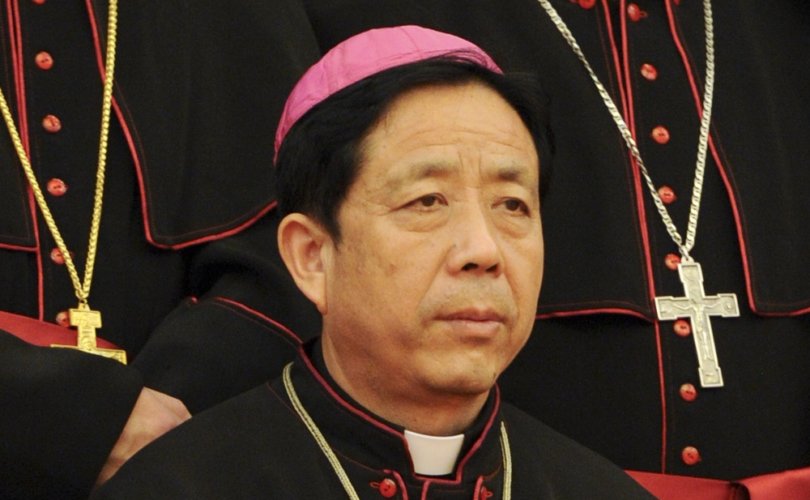 “Love for the homeland must be greater than the love for the Church and the law of the country is above Canon law,” Bishop Fang told the Political Consultative Conference on Religions on November 26 in Beijing.

The purpose of the high-level meeting was to bring the theological teachings of the Catholic Church into line with communist doctrine. Bishop Fang is president of the Chinese Catholic Patriotic Association, which is China’s state-run counterpart to the so-called underground Catholic Church that is still in communion with the papacy.

The conference was in line with President Xi Jinping’s call for the “sinicization” or adaptation of the Catholic Church to the requirements of China’s communist government, and thereby produce “a religious ideological system with Chinese characteristics in line with the demands of the times.” An accord reached between the Vatican and China last year has been criticized for supposedly accomplishing the above political goals for the Church set by President Xi.

Pope Benedict XVI, in his 2007 Letter to Chinese Catholics, underlined the parity of love of the Church and of country even while he called for unity among Catholics. He also called on the faithful to engage in respectful, constructive dialogue with the communists, while asking the government to allow religious freedom for the Catholic Church. Bishop Fang’s statement appears to contradict Benedict’s hopes for Chinese Catholics.

Using a similar line of reasoning, Bishop Peter Fang Jianping of Tangshan said last year that Catholics should support President Xi’s proposed sinicization of religion “because we, as citizens of the country, should first be a citizen and then have religion and beliefs.”

Catholic bishops, priests and laity who recognize the authority of the Pope are persecuted by the Chinese government. Priests and bishops of the so-called underground Catholic Church, who have refused to recognize the authority of the bishops imposed by the communist government, have been subjected historically to torture, imprisonment and summary execution.

In 2018, the Vatican and Beijing signed a so-far secret accord that was apparently intended to provide some measure of relief to underground Catholics and foster unity. The agreement allows Pope Francis to appoint and veto bishops named to Chinese dioceses, so long as they are first approved by the government. It also requires bishops and priests faithful to the Vatican to register with communist authorities, which many have refused to do. The result has been increased persecution on the part of the government. Recently, a bishop who refused to register with the government was detained by police. Fleeing custody, Bishop Vincent Guo Xijin is believed to be in hiding.

The agreement has been severely criticized by Catholics and non-Catholics concerned for human rights in China. For example, Steven Mosher — a veteran observer of China and founder of the Population Research Institute — wrote recently that he fears that the Vatican is turning a “blind eye” to China’s persecution of faithful Catholics.

Cardinal Joseph Zen of Hong Kong has written that despite Vatican assurances, clerics who register with the Chinese government risk breaking with their faith. He has also stated his fear that Pope Francis is cooperating with China to “annihilate” the underground Catholic Church in China. And in February, Ambassador Sam Brownback, who represents the United States in human rights fora, said that persecution of Catholics has seen an uptick since the Sino-Vatican accord was reached.

China continues to engage in unjust practices condemned by the West, including compulsory abortion, wholesale imprisonment of populations such as the Muslim Uighurs, squelching of free speech and free expression of religion.