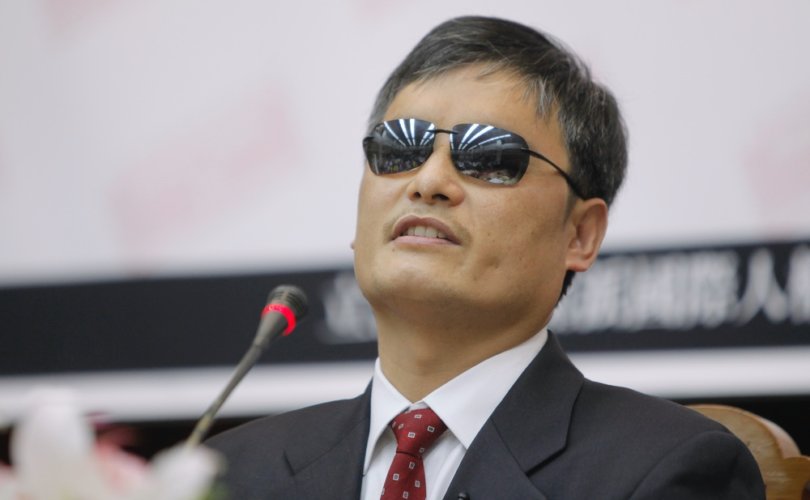 WASHINGTON, D.C., April 27, 2020 (LifeSiteNews) — World leaders should not follow the example of the Chinese Communist Party (CCP) in their attempts to respond to the coronavirus, according to the blind human rights activist Chen Guangcheng, but should instead “come together to confront the CCP” which Chen says “is the biggest and most serious virus of all.”

In an interview with William Saunders on Faith and Law’s Friday Forum, Chen said that “it is time to recognize the threat the Chinese Communist Party poses to all humanity.”

Blind from a young age, Chen gained international prominence more than a decade ago for suing the Chinese government over its brutal “one-child policy,” which has resulted in forced abortions, estimated to be in the hundreds of millions. Forced abortion continues in China under its “two-child policy” now.

He was imprisoned by China’s communist government for his activism, but in 2012 he escaped house arrest and fled to the U.S. Embassy in Beijing. He and his family were later allowed to leave for the U.S., where he is now a distinguished visiting fellow at the Institute for Policy Research and Catholic Studies at the Catholic University of America and a senior fellow at the Witherspoon Institute.

During last week’s interview Chen issued a stark warning to leaders throughout the world, saying: “If free nations do not face the difficult task of deciding how to eradicate communist authoritarianism – a cancer on humanity – they will become its victims.”

“Like fire and water, authoritarian dictatorships do not mix with democracies,” he said.

“No matter how nice the free world tries to be, dictators will not change. The reality you have to face is that dictators see you as the enemy. And it’s not only the people directly ruled by dictators who face harm, as you now see from the coronavirus.”

Chen was dismissive of any idea that the outbreak has been brought under effective control in China.

“Over the past weeks, the CCP has told the world that it has controlled the virus, that it has been victorious. Many people and leaders around the world seem to believe this. And many people are saying we should do what the authoritarian regime has done in China,” he explained.

“This is dangerous,” he continued. “There is nothing to believe in what the CCP reports.”

“They are barricading people in their own homes,” he said. “In Wuhan whole families have been found dead in their apartments because they could not get out.”

But Chen believes the number of coronavirus cases and deaths in China is vastly more than is claimed by the official reports.

“As for the data, there is nothing about the CCP’s numbers that are believable,” he said.

“Recently the CCP has raised the official number of deaths. Previously the number was a little more than 3,200 in the entire country. Then they said they had missed 1,290 people, so they have adjusted the amount to over 4,600 people. But no one believes this – not the Chinese people and no one outside China either. “

‘When the epidemic is finally under control, the rest of the world must come together to confront the CCP’

Earlier this month, President Donald Trump halted federal funding to the World Health Organization (WHO), citing as one reason their failure to investigate whether reports coming from the CCP about the coronavirus in China were accurate.

China expert and president of the Population Research Institute, Steven Mosher, has argued repeatedly that the total number of coronavirus deaths in China is likely to be 20 times more than the official figures.

Chen also claimed that “the CCP is taking advantage of the pandemic to carry out its suppression campaign.”

“So-called quarantine sites are in fact secret detention sites where they can hold human rights activists,” he explained.

Chen said that some Chinese journalists have been captured by authorities and sent to such “detention sites” because they contradicted CCP propaganda by publishing online videos of things such “people collapsing in the streets, body bags piling up in vans” and “hearses and vans carrying bodies working 24 hours a day.” Others, he said, have received death threats because of their work explaining the reality of the situation in China.

“Even the smallest speaking of the truth can result in these terrifying reactions and threats to personal safety,” he said.

The human rights lawyer insisted that once the coronavirus is under control that the rest of the world must hold the CCP to account.

“The CCP has suppressed the truth about this virus and has allowed it to spread around the world, creating a catastrophe. When the epidemic is finally under control, the rest of the world must come together to confront the CCP,” he said.

“A top priority should be to consider how to directly and effectively assist the Chinese people in understanding, resisting, and overthrowing the CCP dictatorial regime,” he continued.

“The West needs to take specific measures to weaken the CCP’s capability to oppress, including technological, economic or other forms of assistance. If the CCP persecutes human rights activists, religious believers, and democracy activists, it should pay the highest price for its actions.”

“If the CCP does something that causes hundreds of thousands of deaths world-wide, it also needs to be held responsible.”