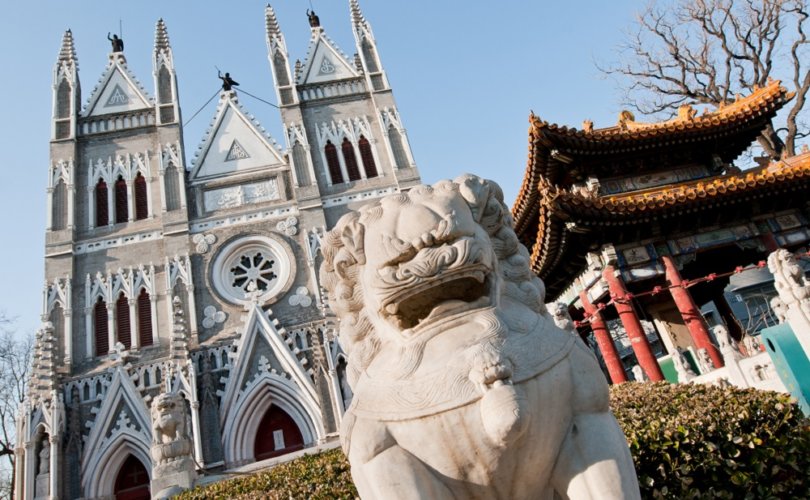 A priest based in Zhejiang province, who is a member of the version of the Catholic Church approved by the Chinese government, said: “The church on the ground is now oppressed no differently from the one underground.”

According to UCA News, the leading independent Catholic news outlet in Asia, the communist government is starting to enforce “a set of regulations” covering the way funerals are to be arranged. These regulations ban priests from attending funeral prayers outside a place dedicated to religious services.

As the local government in Zhejiang province argues, the new regulations have the goal of getting rid “of bad funeral customs” while establishing “a scientific, civilized and economical way of funerals.”

Clergy are now no longer allowed to participate in funerals that take place at the homes of the faithful. Also, “no more than 10 family members of the deceased are allowed to read Scripture or sing hymns in a low voice.”

Zhejiang province is an eastern coastal province in China. Shanghai, the famous Asian city with a population of more than 24 million, is located northeast of Zhejiang.

A source had told UCA News, the regulations strictly ban “religious activities outside religious places, so the priest will not be able to hold funeral prayers outside the church.” Another Catholic confirmed that currently, “priests are not attending religious funeral ceremonies.”

Further, UCA News was told by Father Guo of Henan parish, which belongs to the state-approved “church” in China, “that government officials have asked them to strictly follow” the news regulations. There would be penalties in case of violation, according to Guo, who added, “The punishment could even be closing the church and canceling” the certificate needed by the priest to exercise his ministry.

While communists are still able to have funerals, the same is no longer true for Catholics. “Why are we Catholics not allowed to hold a ceremony? This is exactly persecution,” Guo stated.

The Chinese priest announced that he would simply go underground should the government prohibit him from doing his work as a priest.

Not all priests have yet received the instructions and regulations from the government. Fr. Lee, who also belongs to the version of the Church approved by the government in China, said, “I still hold sacraments at the homes of dead parishioners. The day before yesterday, I sent a greeting to a church member from home to the cemetery. No one blocked it.”

Bitter Winter, a magazine on religious liberty and human rights in China, reported that similar policies have recently been adopted in other parts of the country. The article states, “A village official from the central province of Henan who requested anonymity told Bitter Winter that the local government convened a meeting,” informing clergy, ministers, and their assistants that “all religious funerals are restricted.”

The regulations published in Henan province, north of Hubei province, where the coronavirus broke out in Wuhan, declare that clergy should be stopped in time “from using religion to intervene in citizens’ weddings and funerals or other activities in their lives.”

A member of a Christian community in Wuhan, who died last October, had her family organize a Christian funeral. Bitter Winter continues, “While the family and friends were saying goodbye to the deceased, the police stormed in and arrested her daughter, who was praying for her mother at the time. As it turned out, somebody had reported the family to the authorities. The daughter was only released after the deceased was buried without Christian rituals two days later.”

The Catholic Church in China is still being severely persecuted by the government. Just last month, a Catholic bishop in China was evicted from his residence because he did not intend to join the state-approved church.

An uptick in the persecutions was noticed after the Vatican signed in September 2018 a secret deal with China, which Vatican-observers speculated gave communist authorities power to select bishops.

Overseen by Cardinal Pietro Parolin, the Vatican-China agreement gives President Xi Jinping’s government a say in the appointment of bishops, among other concessions, and paves the way for unification of the state-sanctioned Chinese Patriotic Catholic Association (CPCA), which the communist government created in the 1950s, and the secret underground Church, whose members remained united to the Holy See despite the risk of being killed, imprisoned, and otherwise persecuted for their faith.

Robert Royal, president of the Faith & Reason Institute, argued, also in early January, that the Vatican, “by its accord with an evil government, has essentially told Chinese Catholics that they are wrong to remain independent of a regime they see quite clearly is murderous and hell-bent on forcing the Church to be re-defined along lines that will make it harmless to government interests.”

The editor in chief of The Catholic Thing concluded his piece by saying, “We’ve heard from Parolin that we must be patient and keep up hope, but the facts on the ground are beyond dispute: the Church has been had. The belief that ‘dialogue’ — which like ‘diplomacy’ has become something of an idol in certain internationalist circles — is possible with certain forms of evil will someday be seen, as is clear already to many of us, as a foolish experiment that many Chinese — and not only Chinese Catholics — will pay for with their liberties and lives.”