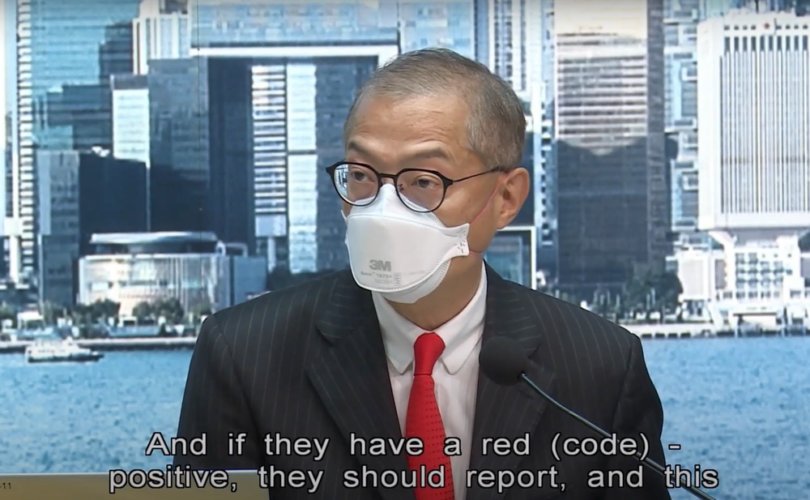 (LifeSiteNews) — In his first press conference since being approved by the Chinese government, Hong Kong’s new health minister has announced that all citizens under COVID-19 quarantine orders will need to wear tracking devices to make sure they comply with the rules.

HK’s new health minister Lo Chung-mau announced that from Friday all #Covid patients under home quarantine will have to wear an electronic bracelet in order to prevent them from leaving home. pic.twitter.com/XVHO31CQ1Q

According to Lo, the new moves are geared toward preventing COVID-19 positive people “from leaving home and entering public venues and are not designed for real-time movement tracking,” Xinqi reported.

The health minister said the government is not interested in pursuing a city-wide lockdown.

The AFP reported that the changes made to the city’s COVID-19 response will also include adding “real name registration” to the “LeaveHomeSafe” app, despite the previous administration’s decision not to do so.

Asked about the change, Lo reportedly said it was “consistent” and that “changing a policy doesn’t mean we are in conflict with the last administration.

Lo was also asked why the Hong Kong government “has so little trust in the citizens that it puts both a bracelet and a red code on the infected persons,” Xinqi reported.

The health minister reportedly responded, “Why Hong Kong needs police and the court? Because we can never guarantee that every single citizen will fully observe the rules.”

Asked why the gov has so little trust in the citizens that it puts both a bracelet and a red code on the infected persons, Lo said, “why Hong Kong needs police and the court? Because we can never guarantee that every single citizen will fully observe the rules.”

The AFP reported that, asked if the new requirements would induce people to conceal their positive Rapid Antigen Test (RAT) results from authorities, Lo said, “not reporting is contravening the law.”

However, Hong Kong correspondent Xinqi noted that “reporting RAT positive results to the gov remains a voluntary decision,” so it’s unclear “which law Lo was referring to.”

China had promised to afford the major city “a high degree of autonomy.” However, the communist superstate has become increasingly aggressive in crushing pro-democracy movements and ensuring that Hong Kong falls into line with the CCP.

Newsweek pointed out that prior to becoming Hong Kong’s new health minister, Lo had “made headlines in February when he said that Hong Kong must maintain a COVID ‘zero tolerance’ policy, because living with COVID-19, the disease caused by the novel coronavirus, would ‘get us all killed.’”

During the Sunday press conference, Lo told reporters that “by using scientific, effective and precise control measures, the maximum results can be achieved with minimum cost.”

RELATED: llicitly ordained Chinese bishop tells the faithful to ‘listen to the word of’ the Communist Party

In a separate interview Sunday, Lo went on to assert that “everyone agrees that those who have COVID-19 should actually not go out and harm the rest of the population,’ Newsweek reported.

“If we give COVID-19 positive people freedom and let them roam the surrounding areas, those without COVID-19 will have their freedoms affected,” he said.