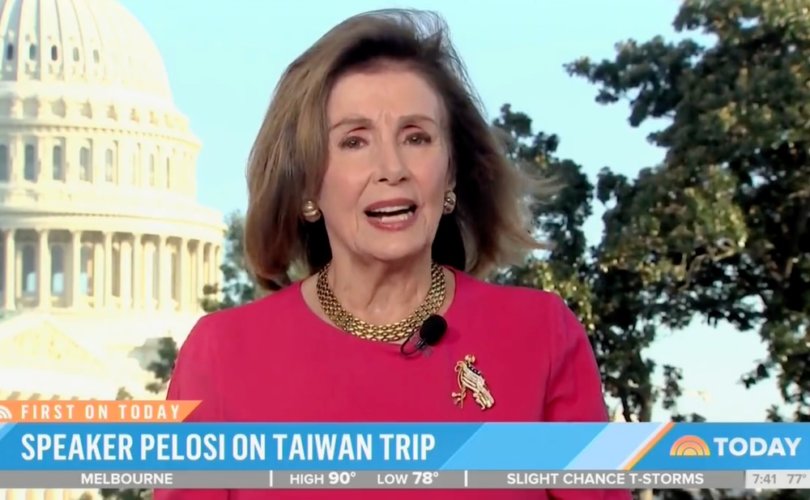 PARIS, France (LifeSiteNews) – The Chinese Embassy in France tweeted out a blasphemous cartoon earlier this month as tensions rose in conjunction with Speaker of the House Nancy Pelosi’s visit to Taiwan.

The image, made by Chinese propagandist Wuheqilin, depicts a witch-like woman with gaunt features wearing a mantle and crowned with stars, climbing through a window towards a sleeping baby under a map of China and a frog, with a brawn man holding a hammer looking on. The gaunt figure is depicted as having Pelosi’s face. A caption in English at the bottom of the image states “No one likes war, but no father would ever allow someone to steal his child.”

The tweet containing the image also names it as “Mary, the Baby Thief,” and has the hashtags #Taiwan and #Pelosivisit.

Reacting to Pelosi’s visit, Lu Shaye, Chinese ambassador to France, stated that the visit was an “unnecessary provocation,” according to Newsweek, and that China would begin a process of “re-education” one its goal of establishing control over Taiwan is accomplished.

Michael Chambon, a theologian and anthropologist, writing in UCA News, stated that the frog is a common image used in China for Taiwan. He also stated that since the 1950’s, the Chinese Communist Party (CCP) disseminated myths that called Catholic orphanages factories in which Chinese babies would be kidnaped and killed.

“In other words, the tweet of the Chinese embassy decided to double down on the image and promote old and hardline communist propaganda,” Chambon wrote. “The fact that something like that is thinkable and acceptable is concerning. There are Chinese officials allowed to publicly promote this discourse.”

“This image is not only offensive but signals a potential return to the early communist ideology that could harm many,” Chambon stated. Chambon also noted that the Vatican maintains relations with Taiwan.

The tweet was released amid Pelosi’s visit to Taiwan earlier this month, which prompted backlash from the Chinese government. The Chinese reacted to the visit with live-fire exercises off the coast of Taiwan and Japan.

When asked in a press conference whether or not the United States still maintains a “one-China” policy, Secretary of State Anthony Blinken maintained that it does, and that the military exercises posed a “significant escalation” in the region. The State Department’s website maintains that the U.S. and Taiwan have a “robust unofficial relationship.”

With China so willing to issue such an anti-Catholic tweet, the nation’s relationship with the Vatican is further called into the spotlight.

— Article continues below Petition —
Defend the Rosary: The Atlantic should apologize for anti-Catholic attack
Show Petition Text
7583 have signed the petition.
Let's get to 9000!
Thank you for signing this petition!
Add your signature:
Show Petition Text

As part of the Sino-Vatican deal, Pope Francis recognized seven bishops appointed by the Chinese government who had previously been excommunicated, even requesting that two underground, legitimate Chinese bishops cede their offices to accommodate the former schismatics. Cardinal Joseph Zen, emeritus bishop of Hong Kong, has described the deal as a “betrayal of the real Church.” The deal is set to be renewed in October.

Zen himself was arrested in May, accused of “allegedly colluding with foreign forces” for his role as a trustee of the 612 Humanitarian Relief Fund. He stands trial in September. The Vatican reacted to Zen’s arrest by releasing a brief statement acknowledging that the Holy See has “learned with concern the news of Cardinal Zen’s arrest and is following the evolution of the situation with extreme attention.”