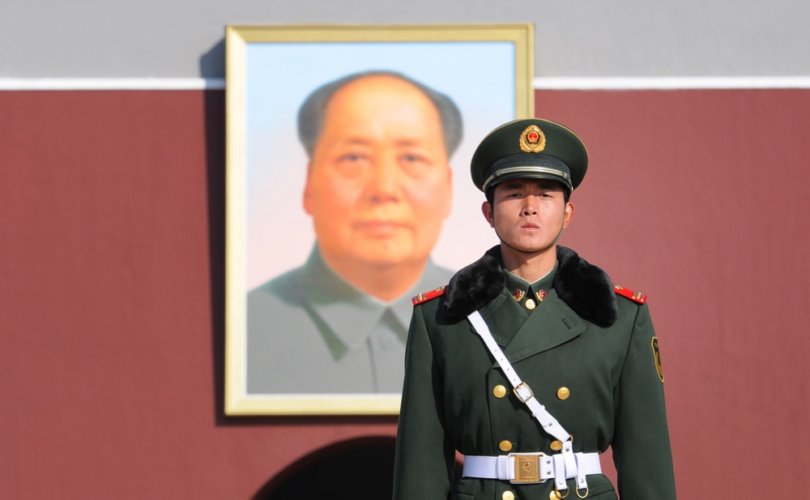 CHINA, March 16, 2018 (LifeSiteNews) – Chinese bishops appointed by the country’s communist government are voicing support for the Vatican’s dealings with China that may allow the government to decide who becomes bishop.

Bishop Peter Fang Jianping of Tangshan said he was confident that the Chinese government and the Vatican will soon reach an agreement on appointment of bishops, reported Eurasia Review on Tuesday.

He noted that if mainland bishops appointed by the government obtained legal status from the church, it could promote development of what Eurasia Review called the “China Church.” The government runs the Chinese Patriotic Catholic Association, a fake church of communist-approved and monitored clerics. The real Catholic Church is underground and is persecuted.

Bishop Fang said that Catholics a should support President Xi proposed sinicization of religion “because we, as citizens of the country, should first be a citizen and then have religion and beliefs.”

Peter Fang Jianping was ordained the bishop of Tangshan after his appointment by the Chinese government in 2000 without Vatican approval and incurred excommunication. The excommunication was lifted by the Holy See in 2002.

When Fang was further questioned about the relationship between Chinese leadership and religion, he said that the negotiations were “giving back to God what is God’s, and to the country what is the country’s,” reported Eurasian Review.

Another government-picked bishop also praised the deal happening between the Vatican and China.

Vincent Zhan Silu was the communist Chinese government’s pick for bishop of Mindong. His episcopal ordination took place in 2000 without Vatican approval. He was excommunicated. However, it has emerged from the current China-Vatican negotiations that the legitimate bishop of Mindong, Joseph Guo Xijing, may be asked to step aside in favor of Zhan. According to Asia News, Bishop Guo was arrested by Chinese authorities in April 2017.

In a recent interview with Sing Tao Daily, Zhan said that there has been a “big breakthrough” in China-Vatican relations. He asserted that “there are no obstacles if everyone just thinks of the benefit of the church for the sake of peace.”

However, Cardinal Joseph Zen of Hong Kong has repeatedly warned that the Chinese government cannot be trusted with the future of the Catholic Church in China. He believes that the Vatican is making a huge mistake by allowing the communist government to pick bishops.

“They are delivering the whole administration of the Church into the hands of the so-called ‘Patriotic Association,’ which is just a puppet in the hands of the government,” Zen recently told EWTN host Raymond Arroyo. “And so it’s a complete surrender. It’s incredible.”

China-watcher Steven Mosher, author of Bully of Asia, has told both Arroyo and LifeSiteNews that Xi Jinping cannot be trusted to protect the interests of Catholics in mainland China.

“The Chinese Communist Party has been hostile to religion from its very founding back in the 1920s,” he told Arroyo in February. “Chairman Mao in the 1950s tried to stamp out Catholicism altogether.”

For example, crosses have been removed from churches and children have been banned from attending Christian services.