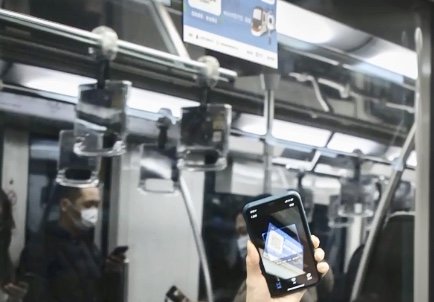 SHANGHAI, China, April 9, 2020 (LifeSiteNews) – While China has begun relaxing its severe coronavirus quarantine restrictions in its hardest hit cities, it has introduced an electronic tracking of their citizens via their smartphones that determines exactly where someone can go and what they are able to do.

A video report filed by CNN’s David Culver explained how Chinese authorities have begun to once again allow groups of people to gather in restaurants, stores, and mass transit while providing confidence that people who gather in close quarters will not be dangerously exposed to COVID-19.

But there is a catch.

“It all comes down to what’s on your phone,” Culver said.

Citizens are issued a “QR code” which is displayed on their smartphones. QR codes – short for “quick response codes” – are the familiar postage stamp-sized matrix of tiny black boxes, first used by companies to track products from manufacturing through marketing and sales. They are akin to the ubiquitous bar codes which replaced price tags on items on store shelves long ago, but are able to record and communicate far more information.

Usage and applications of the now ubiquitous QR codes have proliferated over the last decade.

In China, the unique QR code assigned to an individual and displayed on his or her phone can then be scanned by authorities or by employees stationed at the entrance of all types of retail and service establishments who then either allow an individual to enter or turn them away, based on the information their QR code reveals.

Chinese government tracing and tracking hundreds of millions of people

“Green is your golden ticket to get into certain places, be it restaurants, hotels, or shopping centers,” CNN’s Culver said.

“If it’s yellow or if it’s red, it means you’ve been flagged for some reason,” Culver said and “would suggest that they’d have you do some home isolation, some self isolation.”

“If you’re on a flight or a train or you’re in a space and somebody a few seats away turns out to have been a confirmed case, (government authorities) are able to track who was around that individual,” Culver explained. “And if you were one of those people nearby, you would then be flagged and potentially asked to quarantine and to keep yourself,  removed from the rest of society, as they continue to investigate and monitor whether or not that’s really an exposure risk.”

“It’s their way of getting back to business, of resuming life and at the same time, tracing and tracking individuals as they move about the different parts of China,” Culver said.

“And this is happening now with hundreds of millions of people,” he added.

The QR code tracking of individuals due to the coronavirus pandemic appears to be a crisis-induced opportunity for the Chinese Communist Party (CCP) to further advance its social scoring system, which one commentator described during the program’s infancy as “East Germany on steroids.”

Imagine East Germany on steroids and you have the People's Republic of China today. Instead of legions of citizen informants spying on their colleagues and family, advanced information aggregation technology does it for you, logging your every move – from the superficial to the deeply personal. The data is then plugged into a psychometric scoring system that impacts your credit, job prospects, and every other measurable aspect of your value and potential as a member of society. China's social credit scheme may appear bizarre and abstract to those far away, but it's very much real.

He explained how onerous the social credit program is:

As recently reported, “under the social credit scheme, points are lost and gained based on readings from a sophisticated network of 200 million surveillance cameras – a figure set to triple in eighteen months.” Various factors affect the social credit scores, including what those you associate with do and say.

You can sink fast and become a low-ranking citizen, too: “jaywalking, late payments on bills or taxes, buying too much alcohol or speaking out against the government, each cost citizens points.” Penalties are also levied for playing video games too much, posting “fake news” (Jack Dorsey and Mark Zuckerberg just applauded), overspending on unnecessary purchases and drinking too much. Ironically, posting too much on social media can also cost you serious points.

If you fall too low in your ranking you can be barred from air and train travel, have your social media accounts shut down, have your internet specifically targeted to slow down your connection speed, have your kids excluded from applying to private and prestigious schools, and be shut out of various elite occupations such as working in major banks, government jobs, and jobs requiring government approval (which in China is a lot of jobs). Public naming and shaming is another punishment: you'll be on a blacklist as well, in case any employers or associates started getting too easygoing about the system.

“What we have now in China is the nightmare of the world’s first truly totalitarian state,” observed Steve Mosher, president of the Population Research Institute and a frequent guest on EWTN’s “The World Over” as an expert on Asian affairs.

“The Left has always said that true totalitarianism is impossible to achieve because there are never enough minders,” Mosher told LifeSiteNews previously. “That’s no longer true.”

“The cyber walls are closing in,” he added.

China’s “Social Credit System” is set to be fully online sometime this year, and apparently the coronavirus has given it a boost.