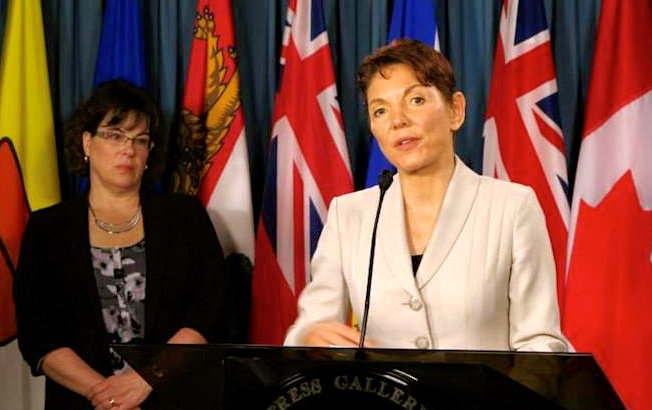 Reggie Littlejohn speaks at a press conference calling for an end to female gendercide.

May 21, 2015 (LifeSiteNews.com) — Under the One-Child Policy, a Chinese schoolteacher, five months pregnant, was ordered to abort by the end of May or lose her job. This order has just been reversed, following domestic and international media attention.

Qin Yi (sometimes translated Tan Yi) and Meng Shaoping were both divorced and both have daughters from their first marriages. Qin Yi’s residency is in Huangshan City in Anhui Province, where officials told her that she could have a second child because she divorced the father of her first child.

She later moved to Libo County, Guizhou Province, because of her job as a teacher. There, she was told she must terminate her pregnancy by the end of May or lose her job.

News of this situation was reported widely in China and spread internationally, causing outrage. The Family Planning Commission on the Guizhou provincial level overturned the local authorities and will allow Qin Yi to have her baby.  According to the South China Morning Post, this case demonstrates “how unyielding the mainland’s birth limits continue to be despite a loosening in the 35-year-old policy to let more couples to have two children.”

Reggie Littlejohn, President of Women’s Rights Without Frontiers, stated, “We are delighted that Qin Yi and her husband will be allowed to have their baby. Our hearts nevertheless go out to this couple because of the harrowing experience of coming so close to suffering the excruciating pain of a late-term forced abortion. Their experience dramatically demonstrates what I’ve been saying all along:  China is continuing its horrific practice of late term forced abortions. This is savagery and it must be stopped.”

Littlejohn continued, “China has not ‘eased’ its One-Child Policy.  It has merely tweaked it.  The fact that the Chinese Communist Party is allowing some couples to have a second child does not mean that they have ceased their appalling methods of enforcement. Couples still need to have a birth permit for the first and for the second child, or face forced abortion.”

“This case also demonstrates that the One-Child Policy is not enforced uniformly throughout China. A pregnancy may be allowed in one province and not allowed in another. There’s no uniformity.  It’s like the Wild West when it comes to the coercive enforcement of birth limits,” she added.

“Also, the fact that the CCP reversed its decision and allowed this couple to have their baby demonstrates that it does in fact respond to pressure, both domestic and international – despite its protestations to the contrary – so we need to keep up the pressure,” Littlejohn concluded.