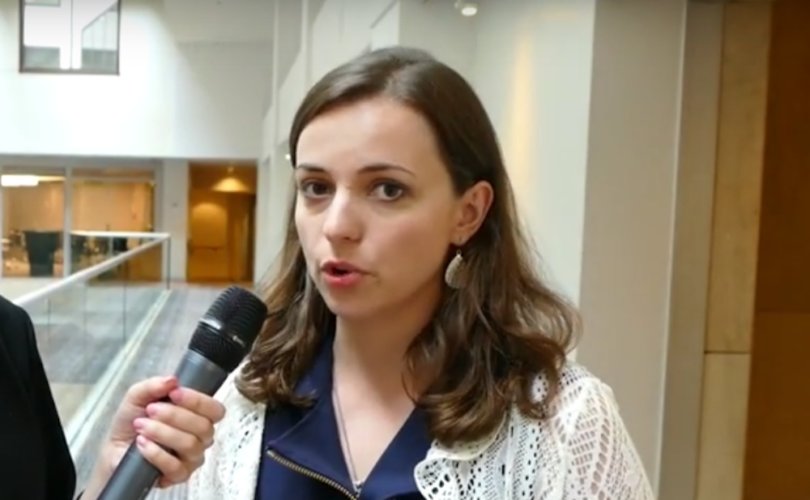 Arina Grossu serves as the Director of the Center for Human Dignity at the Family Research Council (FRC).

WASHINGTON, D.C., June 28, 2016 (LifeSiteNews) — The pro-abortion rhetoric of “my body, my choice” paved the way for euthanasia and physician-assisted suicide, a pro-life leader told LifeSiteNews in an exclusive video interview.

“I think one of the gravest threats we have right now is the threat of assisted suicide and euthanasia in America,” said Arina Grossu, the Director of the Center for Human Dignity at the Family Research Council (FRC). “This rhetoric of ‘my body, my choice,’ which has been pushed by the pro-abortion lobby for so long, is going to extend to end-of-life issues. And we’re going to see people say, well, I can choose what to do with my body at the end of life. And we need to fight that back.”

Grossu told LifeSiteNews that the pro-life community must show those threatened by euthanasia and assisted suicide the “beauty of life, even life when society no longer deems it as worthy or of use,” and show solidarity with the sick, elderly, and suffering.

“Death is part of the process of living, and I think society is afraid to talk about death and to talk about suffering,” said Grossu. “Death and suffering are not … the most evil things that could happen,” but intentionally killing another person or oneself as a solution to that suffering is “barbaric.”

Grossu said the pro-life movement is winning on the abortion front thanks to ultrasounds that allow people to see the humanity of pre-born children, the testimonies of women hurt by abortion, and polls showing an increasing number of pro-life Americans.

“America is more and more pro-life and our laws are reflecting that,” she said.

Grossu also told LifeSiteNews that she wishes abortion supporters knew that as a pro-life woman she cares deeply about both women and children.

“We stand up for human rights and … those human rights start in the womb,” she said. “We know that a lot of these abortion supporters care for animals, and care for them not to be hurt, and so we wish that they would join us” and extend the same care they have for animals to unborn babies.