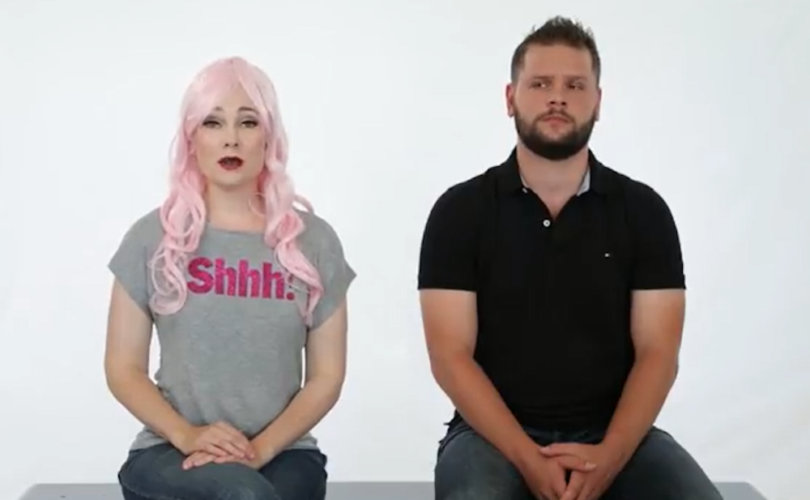 AJAX, Ontario, August 29, 2018 (LifeSiteNews) – Choice For Two (Choice42), the Canadian pro-life group behind the viral “Magical Birth Canal” video, is back with another video using satire to demolish another pro-abortion talking point: that men shouldn’t speak out against abortion because they can’t get pregnant.

“This is Jonathan. Jonathan is a man,” Choice42 founder and director Laura Klassen begins, once again in her iconic pink wig. “Jonathan has no say about what happens to tiny humans before they’re born, because Jonathan does not have a uterus. Just saying.”

Klassen sarcastically suggests that “if you are not directly involved, then you can’t have an opinion” is the same standard applied to “any human rights violation.” She asks Jonathan if he’s a slave or a slave owner, to which he shakes his head, then asks if he thinks slavery is wrong. He begins to open his mouth, but she immediately silences him.

“And besides, men don’t have anything to do with reproduction,” she concludes.

Abortion advocates generally frame abortion as a woman’s fundamental right, arguing that only women can decide because only they can experience the physical and emotional toll of an unwanted pregnancy. Male pro-lifers are routinely denigrated as intruding on something that doesn’t concern them (at best), or attempting to control women for selfish reasons (at worst).

Pro-lifers argue that preborn babies are distinct from and equally valuable to their mothers, giving people of both sexes a moral obligation to speak on their behalf. Settled biological criteria, accepted in mainstream biology and medical texts, establishes that a living human being is created upon fertilization.

Pro-lifers also stress that fathers in particular have a natural connection to their preborn children and rightful interest in seeing them safely born. They argue that the pain of men who either facilitated or failed to prevent their partners' abortions deserves both respect and consideration.

“Why do these dads suffer so much? It’s partly because they’re hard-wired to protect and care for their children,” Eric Metaxas wrote in 2015. “And on a gut level, these men know they have violated the moral law. A law that says it’s wrong to kill. They recognize that they behaved in a less than manly way by doing nothing while their child’s mother aborted their baby — or worse, by coercing the child’s mother and paying the abortionist.”

Klassen herself is a mother, and used her pregnancy announcement last year as an occasion to highlight the fact that the child growing within her body possessed another distinct body, with an accompanying right to life.