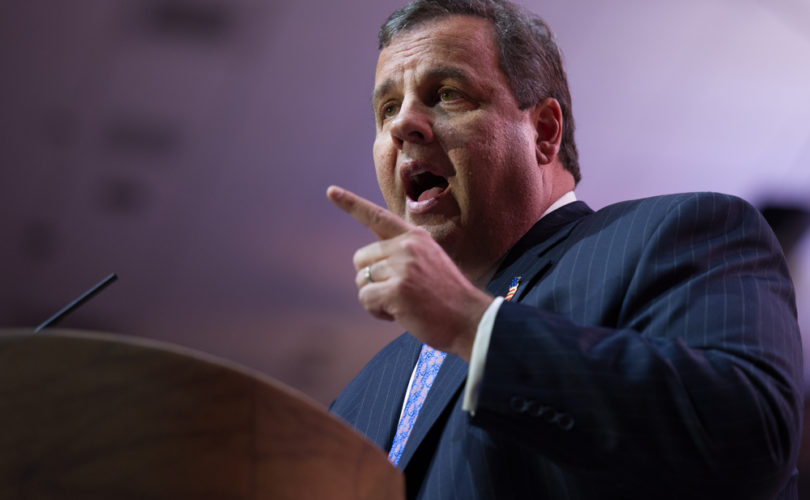 DES MOINES, Iowa, January 29, 2016 (LifeSiteNews) – The most important program any future Republican president could cut would be Planned Parenthood funding, according to Chris Christie.

While Republicans often campaign on reducing the size and scope of government, the last Republican president added a new federal entitlement program to the ballooning national budget. “Can you name even one thing that the federal government does now that it should not do at all?” Bret Baier asked Governor Christie at last night's Republican presidential debate in Des Moines,

“Yes. You want one?” Christie joked.

“How about one that I've done in New Jersey for the last six years. That's get rid of Planned Parenthood funding from the United States of America,” he said.

Planned Parenthood, the nation's leading abortion provider, performed 323,999 abortions and received $553.7 million in taxpayer funding in 2014. In all, it is responsible for approximately one in every three abortions nationwide.

The exchange was one of two times abortion came up in the last debate before the Iowa caucus. More than one-third of likely Republican Iowa caucus goers identifies as an evangelical Christian.

In the second, Senator Rand Paul was asked about the tension between his federalist views and his support for a national bill, the Life at Conception Act, which would end all abortions nationwide.

If Roe v. Wade were overturned, the issue would return to states, and liberal states like California may choose to liberalize their abortion laws, moderator Chris Wallace said. Which path did he favor?

“Both,” Sen. Paul replied. “For the most part, these issues would be left back to the states,” he said, but “there might be an occasion” when the federal government moves to protect life, as his bill recommends.

While Paul has a strong pro-life record, the attempt to bridge his support for life and his constitutional view of states rights fell flat with some. Brian Doherty at Reason wrote, “It's hard to imagine a more wishy-washy evasive sounding answer than starting the answer to a 'yes or no' question with 'both.'”

Paul was on more certain ground when he eloquently defended the need for the nation to remain virtuous, even religious, if it hoped to preserve its freedom.

“If we don't know right and wrong, I think we have lost our way. I think we become unmoored,” he said.

The right to life surfaced in the “undercard” debate earlier in the evening, as Carly Fiorina and Senator Rick Santorum spoke of their commitment to protecting the unborn, and Governor Mike Huckabee repeated his “bolder” pro-life strategy of “not just saying we're going to defund Planned Parenthood” but “applying the Fifth, and Fourteenth amendment to every person from conception.”

Huckabee and Santorum later joined Donald Trump at his fundraiser for veterans, which took place across town at the same time as the main Republican debate.

Chris Wallace: Senator Paul, in May on the campaign trail you, said you didn't get into politics to fight about abortion. You said you were more concerned about the national debt. Your answer is to turn abortion back to the states the way it was before Roe v. Wade.

Does that mean that if a liberal state, let's say, wants to make abortion legal, that you're okay with that and what do you say to conservative voters who believe deeply that abortion is murder?

Rand Paul: You know, I think abortion is always wrong. I've supported a variety of solutions, both state as well as federal. In fact, just last week, I introduced the Life at Conception act, which would say that the 14th amendment would defend an individual even in the womb.

But if we don't know right and wrong, I think we have lost our way. I think we become unmoored and I think without the religious foundation that guides us all, I think we have a great risk of going horribly in the wrong direction.

But I've also said for the most part, these issues would be left back to the states. So there might be an occasion if we did overturn Roe v. Wade — Roe v. Wade nationalized the issue. If you had the court reverse Roe v. Wade, it would become a state issue once again.

I think it would be better the more — the less abortions we have, so the more states that we have that made abortion illegal, the better, as far as trying to save and preserve lives.