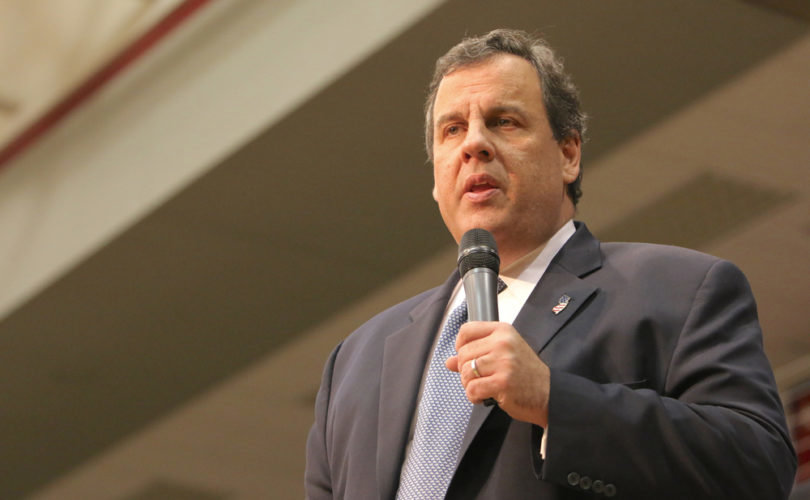 DES MOINES, Iowa, January 29, 2016 (LifeSiteNews) – Gov. Chris Christie said he believes clerks who oppose gay “marriage” should be able to keep their jobs, but some critics say that's yet another issue where Christie's record and campaign rhetoric collide.

Gov. Christie denied that he said Kim Davis, or another government worker with similar religious convictions, should issue such documents or lose their job at last night's Republican debate in Des Moines, Iowa.

“I never said that Ms. Davis should either lose her job or that she had to do it,” Christie told moderator Chris Wallace. Instead, “someone in that office has to do their job. So if Ms. Davis wanted to step aside and get rid of her ability to be able to do that, there should be someone else in that office who it didn't violate their conscience so they could follow the law of the state of Kentucky.”

However, when the Kim Davis story broke nationally last summer, Christie took a less compromising position on the issue.

“You took the job, and you took the oath,” he told Christians in public service. “When you go back and re-read the oath, it doesn’t give you an out. You have to do it.”

“I’m sure there are individual circumstances that might merit some examination” for a waiver of conscience, he said, “but none that come immediately to mind for me.”

Maggie Gallagher, a senior fellow at the American Principles Project, said she was taken aback at Christie's new professed stance.

“I welcome Chris Christie to the circle of those who are willing to provide religious accommodations for gay 'marriage' dissenters,” she said. “But he is misleading Iowans, in the exact way Americans hate career politicians, if he says he has always supported them or Kim Davis.”

“Straight talk is a precious resource,” she said. “If he really is willing, why won't he provide them for marriage clerks in New Jersey? And why has he refused to support” the First Amendment Defense Act, “which protects gay marriage dissenters from discrimination by the federal government?”

Christie's truthfulness has been called into question over a number of social issues in recent weeks, including his one-time personal donation to Planned Parenthood, his support for the confirmation of Supreme Court Justice Sonia Sotomayor, and his position on the Second Amendment.

Lingering questions about his record mean that Christians are unlikely to support Christie in the primaries, especially in next week's evangelical-heavy Iowa caucus. Christie is instead hoping for a breakthrough in New Hampshire, where polls currently have him in sixth place, behind Marco Rubio.

Chris Wallace: Gentlemen, we had a case study on religious liberty just this last summer. A county clerk in Kentucky named Kim Davis refused to issue marriage licenses to same-sex couples after the Supreme Court ruling, saying that it violated her religious beliefs.

Governor Christie, you said that she must follow the law or be moved to another job that would be in keeping with her conscience. But some conservatives say that that violates her religious liberty.

Chris Christie: No, what I said, Chris, was that the law needs to be followed. And that someone in that office has to do their job. So if Ms. Davis wanted to step aside and get rid of her ability to be able to do that, there should be someone else in that office who it didn't violate their conscience so they could follow the law of the state of Kentucky.

I never said that Ms. Davis should either lose her job or that she had to do it. But what I did say was that the person who came in for the license needed to get it. And so if there's someone in that organization, and it turns out there was, who was willing to be able to do that, that's what we should do.

But just as importantly, and I agree with what John said. You know, we all have our own individual interpretations of our faith. And here's the problem with what's going on around the world. The radical Islamic jihadists, what they want to do is impose their faith upon each and every one of us — every one of us. And the reason why this war against them is so important is that very basis of religious liberty.

They want everyone in this country to follow their religious beliefs the way they do. They do not want us to exercise religious liberty. That's why as commander in chief, I will take on ISIS, not only because it keeps us safe, but because it allows us to absolutely conduct our religious affairs the way we find in our heart and in our souls. As a Catholic, that's what I want to do. And no matter what your faith is, that's what I want you to be able to do.