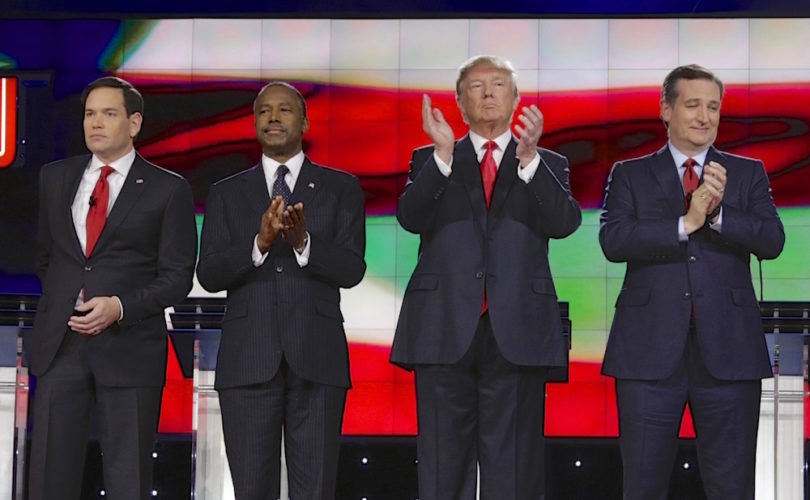 Before the debate, Rush Limbaugh spoke of a secret agreement between Jeb Bush and Chris Christie to “take out” Sen. Marco Rubio. However, Rubio struck first, accusing Christie of being “more interested in funding Planned Parenthood than he is in funding the military.”

“Chris Christie wrote a check to Planned Parenthood,” Rubio said, an attack he has deployed to some effect on the campaign trail in recent weeks.

“Unfortunately, Governor Christie has endorsed many of the ideas that Barack Obama supports,” Rubio said, “whether it is Common Core, or gun control, or the appointment of Sonia Sotomayor, or the donation he made to Planned Parenthood. Our next president, and our Republican nominee, cannot be someone who supports those positions.”

“First of all, I didn't support Sonia Sotomayor. Secondly, I never wrote a check to Planned Parenthood,” he said.

While he has consistently opposed public funding of Planned Parenthood, the nation's largest abortion provider, Christie told the Newark Star-Ledger in 1994, “I support Planned Parenthood privately with my personal contribution and that should be the goal of any such agency – to find private donations.” While he claimed the statement was a “misquote,” Christie hired its author, Brian Murray, to be his official spokesman as governor.

In a 2009 press release, Christie said that he supported the Senate confirmation of Obama's Supreme Court Justice Sonia Sotomayor, writing, “I support her appointment to the Supreme Court and urge the Senate to keep politics out of the process and confirm her nomination.”

So far, Christie has offered no explanation for that press release. Christie, who has struck liberal social positions as governor of a heavily Democratic state, is a onetime favorite of the donor class whom Christian conservatives are unlikely to vote for in the primaries.

.@marcorubio: I'm proud that we have a president that is committed to funding Planned Parenthood. #GOPDebate

Blue states overshadowed the Republican debate later, when a moderator asked Sen. Ted Cruz what he meant when he said that Donald Trump held to “New York values.”

The Texas senator replied, while “there are many, many wonderful, wonderful working men and women in the state of New York…the values in New York City are socially liberal, or pro-abortion, or pro- gay-'marriage.' They focus around money and the media.”

Donald Trump hailed the city for the way it pulled together following the 9/11 terrorist attacks, and pointed out that the intellectual father of the modern conservative movement, William F. Buckley Jr., was from New York.

Aside from values, the greatest flare-ups came as Ted Cruz and Marco Rubio debated the finer points of their tax proposals, with Rubio accusing Cruz of proposing a Value Added Tax (VAT), like those employed in much of Europe. Cruz attacked Rubio, who supported the “Gang of Eight” amnesty bill in the U.S. Senate, for favoring amnesty for millions of illegal immigrants. Rubio pivoted, forcefully accusing Cruz of being a flip-flopper whose positions change based on political expediency.

The debate in North Charleston, South Carolina, was the sixth of the primary cycle, coming just two weeks before the February 1 Iowa caucus.

Polls after the debate showed Trump and Cruz the decisive winners, with Rubio placing a distant third. The remaining candidates mustered little support.

Chris Christie throws his hat in the ring, but his record gives conservatives pause

‘Who knows’ if Supreme Court was right on Hobby Lobby: Chris Christie

Chris Christie: Clerks must perform same-sex ‘marriages’ regardless of their religious beliefs