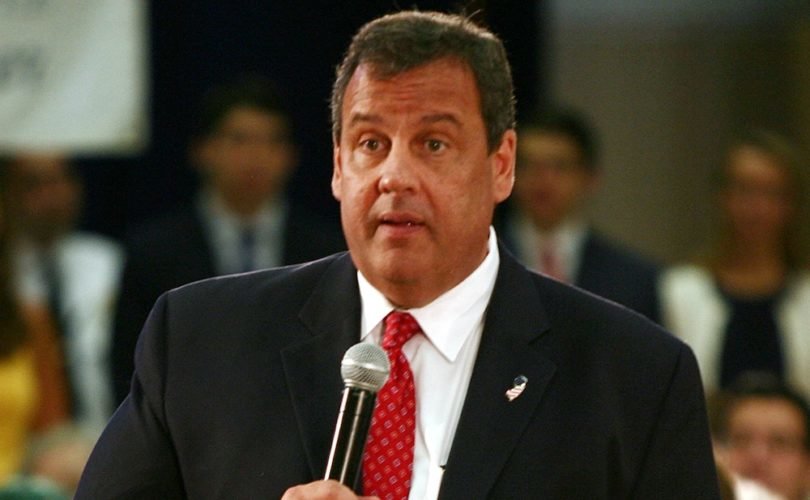 LIVINGSTON, NJ, June 30, 2015 (LifeSiteNews) – Chris Christie, the two-term governor of New Jersey and former federal prosecutor, became the 14th hopeful to seek the Republican presidential nomination. During a speech before his alma mater, Livingston High School, Christie did not mention the sanctity of life, the definition of marriage, or the importance of religious liberty.

Instead, he extolled the wonders of candor and compromise.

He set “out to change the world” by running “a campaign without spin.”

“I mean what I say and I say what I mean, and that's what America needs right now,” Christie told his hometown crowd.

He promised to bridge the partisan divide and find solutions conservatives and liberals could both endorse. Americans, he said, were anxious over a government that “doesn't even talk to itself.”

“Both parties have led us to believe that in America – a country that was built on compromise – that somehow now compromise is a dirty word,” he added.

As president, he promised to “fix the broken entitlement system” and reassert American dominance by projecting U.S. military power around the globe.

“In a world that is as dangerous and as frightening as anytime I've seen it in my lifetime, there is only one indispenable force for good in the world,” he said. “It is a strong, unequivocal America that will lead the world and not be afraid to…tell our adversaries that there are limits to your conduct, and America will enforce the limits to that conduct.”

The focus of Christie's remarks, and his run, did not surprise. Christie has largely eschewed social issues and, when he has spoken on them, has given conservatives cause for alarm.

Although he has vetoed funding for Planned Parenthood, he also appointed pro-abortion justices to the state Supreme Court. Lee Solomon was endorsed by Pro-Choice New Jersey.

Pro-family leaders said his dereliction amounted to “a disqualifying failure” that is “not going to play well for him if he chooses to enter the Republican primary for president of the United States.”

In 2013, he became the second governor in the nation to ban reparative therapy – a therapeutic approach to assist teens lessen unwanted feelings of homosexual attraction – for minors. The first was California's Jerry Brown.

When asked about last year's Hobby Lobby Supreme Court decision, which allowed closely held corporations to file a religious objection to providing abortifacient drugs to their employees, he responded, “Why should I give an opinion as to whether they were right or wrong?”

“You know what? I don't think that's the most central issue that we need to talk about this morning when you look at the challenges that face our country.”

He later responded to a reporter's impromptu question about whether he supported the decision by saying, “I do.”

Christie will announce Thursday that he is pulling New Jersey out of federal Common Core educational standards and asking state Department of Education Commissioner David Hespe to establish new criteria for the state.

That is a major change from his 2013 position. As recently as 2013, he said, “We're doing Common Core in New Jersey, and we are going to continue. This is one of those areas where I have agreed more with the president than not and with [Education] Secretary [Arne] Duncan.”

He changed his position in late May.