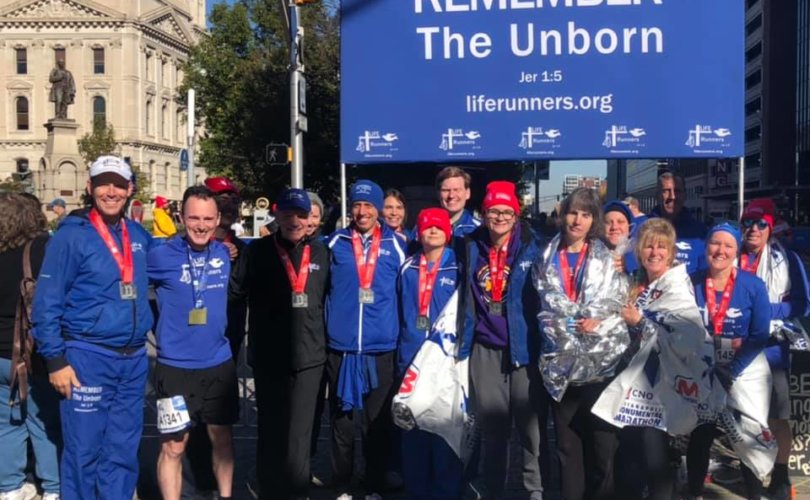 Alan Webb and Tina Jinkens were among the Life Runners participating in the Indianapolis Monumental Marathon.Life Runners

INDIANAPOLIS (LifeSiteNews) — Alan Webb, the fastest miler in American history, and Tina Jinkens, a blind woman who was hit by a semi-truck in 2019, share a few things in common: Both are devout Catholics, both are runners, and both are members of a group dedicated to pro-life witness.

After they both participated in this month’s Indianapolis Monumental Marathon, however, they shared something even more strikingly similar: their reflections on their Indy run’s lessons in humility, their greater purpose, and putting God first.

Webb, who LIFE Runners founder Pat Castle describes as “basically the Michael Jordan of track and field,” told LifeSiteNews how during this year’s Indy marathon he met with an unexpected hurdle that he came to realize allowed for an even greater pro-life witness.

Webb told how his left hamstring started cramping up a little after four miles into the race, forcing him to slow down. He tried to loosen up his muscles while walking, but, Webb said, “Trying to get your already cramped up leg to loosen up when it’s really cold is double double hard or triple hard.”

Webb walked for a bit, found a stop where he could stretch out, and got back in the race to begin again, “jogging real easy.”

But he said it then occurred to him, as Castle would remind the LIFE Runners, “that walkers are actually the best messengers of LIFE Runners because they’re going a little slower,” and the “Remember the Unborn” message on the back of their shirts is “easier to read” at that pace.

“I just had that thought come to mind, as everybody was passing me, and I said, this is what I should be doing. I’m sure thousands of people saw me just walking,” Webb said.

“God works perfectly … That’s what I was meant to do. And I just made peace with that during the race,” he went on.

Webb, who converted to the Catholic faith about 2 ½ years ago, explained to LifeSiteNews that his current lens of faith totally transformed what would otherwise have been a disheartening experience.

“It was a humbling — in a good way — experience. Humbling because I felt like it’s helping to purify me and our whole family really. I felt brought closer to the Lord.”

Webb explained about his conversion, “Once I really committed, the magnetism of Christ just kept drawing me closer and closer, and I feel like just every day I’m continually being converted over and over.”

With his new worldview of faith, what he would have previously regarded as a failure becomes something “almost better”: “Your worldly suffering is turned into a good thing,” Webb said.

Tina Jinkens, another LIFE Runner who has been blind from birth and started running in her 20s, had similar reflections about her Indy marathon experience.

About two years ago, Jinkens was hit by a semi-truck as she was crossing an intersection with her guide dog. The accident shattered her pelvis, and broke nine ribs and several other bones, requiring surgery to add plates to her rib cage, collarbone, right wrist, and above and below her right eye.

An avidly pro-life Catholic, she told LifeSiteNews how she was hit while she was on her way to an adoration chapel “to pray in solidarity” with others in the Kansas City area, praying that a new Planned Parenthood wouldn’t open there, as was anticipated. She confirmed that the abortion facility never opened.

“God is why I’m still alive,” she said after the accident. “I was told a lot of people were praying.”

Jinkens was already running marathons with LIFE Runners, and had run the Boston Marathon only four months before her accident. “The doctor said that if I hadn’t been training, my heart probably wouldn’t have withstood what I went through,” she told LifeSiteNews.

She said her doctors thought it would be two years before she could walk again, but her progress was much faster than anyone expected. Already in 2020, less than a year after her accident, she was running again. Before the Indy marathon, she completed three 5K runs and one eight-mile race.

Her accident hasn’t come without a cost, however: “It takes longer to train because I’m slower than I used to be. My miles are pretty slow. But I’m glad to be on my feet. I have kind of a competitive nature, so part of me’s like, I need to get faster — and part of me’s like, be thankful to God every day you’re on your feet.”

Jinkens said that after the Indy marathon, she and her running partner, Deb Mirenda, “struggled with” not making the time “we thought maybe we should’ve.”

“We didn’t really push ourselves physically,” she said, but added that she believes Castle’s saying that while running races, “You’re in the place where you’re supposed to be, where your message is supposed to be seen in the race.”

Jinkens pointed out that their slower pace allowed them to pray more, making the run even more spiritually fruitful: ”If I had pushed the pace, I told my running partner it would’ve taken the entire 13 miles to say one rosary without a break,” she said with a laugh.

“It’s all about our Lord … and I can let my pride get in the way or myself in the way. Christ must increase and we must decrease.”