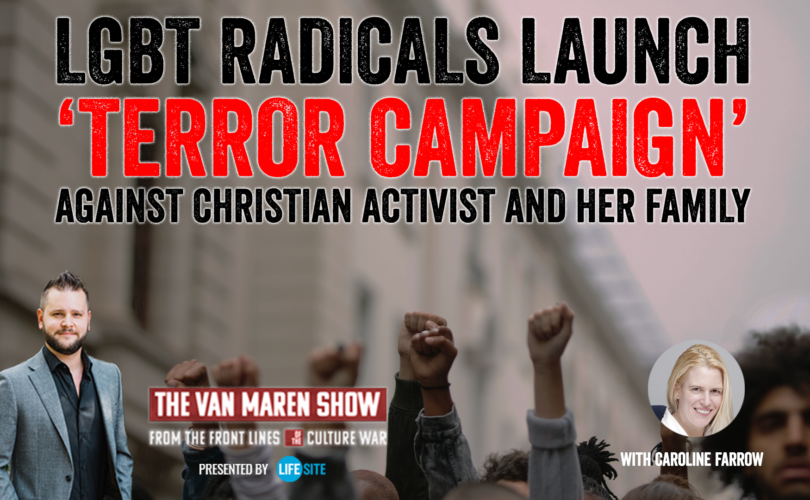 April 14, 2021 (LifeSiteNews) — In this week’s episode of The Van Maren Show, pro-family commentator and journalist Caroline Farrow joins Jonathon for a conversation on transgenderism in the U.K. For many years, she and her family have been subjected to vicious attacks and threats from the police and LGBT activists.

Farrow started defending Church teaching on abortion, contraception, homosexuality, and other issues in 2010. However, around 2016 she created a stir in the media in the U.K. when she called out a transgender activist for “child abuse, mutilation and castration” of her 12-year-old son. This led to an onslaught of attacks from the radical LGBT community which Farrow says was a “terror campaign.”

Among other things, Farrow and her family were sent death threats. Her children were ousted from schools, too. Their email and social media accounts were being hacked. Farrow was prohibited from traveling. Her family was “too frightened to leave the house,” she said.

Farrow tells Van Maren that the attacks against her were not really reported in the media. “There hasn’t really been … interest … because it is seen as not fitting the narrative.” I’m “not the right kind of victim.”

Although the entire ordeal was frustrating and angering, Farrow says that her Christian faith helped her get through it all.

Farrow rejects the characterization that she is “homophobic” and full of disdain. She says that her mission is to share the beliefs of the Church and that “having a belief about something doesn’t equate to hatred.”