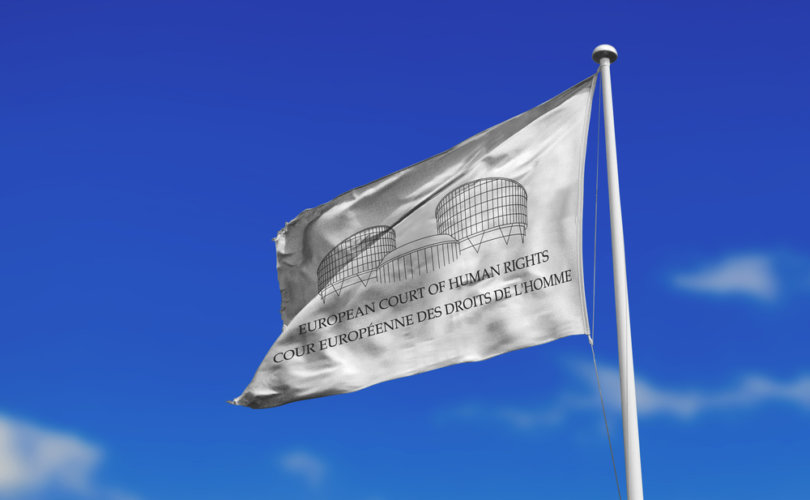 Flag of the European Court of Human RightsShutterstock

STRASBOURG, France (LifeSiteNews) ­– A Christian-owned bakery in Northern Ireland which refused to bake a cake displaying the message “support gay marriage” has had its 2018 U.K. Supreme Court victory vindicated after the European Court of Human Rights (ECHR) tossed out a challenge against the British court ruling.

In an attempt to overturn the ruling, lawyers for Gareth Lee, the LGBT activist who originally ordered the cake with the pro-homosexual “marriage” slogan, filed an appeal to the ECHR, arguing that Lee’s “rights were interfered with by a public authority – the Supreme Court – by its decision to dismiss his claim for breach of statutory duty to provide services, and that the interference was not proportionate.”

However, a submission to the court from the Christian Institute, which supported the bakery firm through its initial four-year court battle, countered that Lee’s lawyers had “failed to demonstrate that there was any failure on the part of the United Kingdom in its positive obligation to promote convention rights as between private individuals.”

“The Court’s approach to this case,” the submission continued, “should be one of a wide margin of appreciation, only intervening in the event of manifestly unreasonable, arbitrary decision-making or an approach fundamentally inconsistent with Convention principles.”

On January 6, the court issued a final ruling that Lee’s case was “inadmissible,” criticizing the activist for asking the jurors “to usurp the role of the domestic courts” by intervening.

The family-owned Ashers Baking Company, named after the biblical patriarch Asher and based in Belfast, was originally taken to court in 2014 by Lee after refusing to fulfill his request for a cake with a pro-homosexual message.

The company had agreed to bake the cake at the time to avoid creating a scene but cancelled and refunded his order two days later. The McArthur family, who own the business, said that fulfilling the order would be contrary to their Christian beliefs.

At the time, the Supreme Court ruled that the “objection was not to Mr. Lee because he, or anyone with whom he associated, held a political opinion supporting gay marriage. The objection was to being required to promote the message on the cake,” leading the judges to unanimously support the McArthurs’ right to refuse.

Following their initial success in the U.K. court system, Daniel McArthur credited God for their victory, saying that “through the bible and the support of Christians, He [God] has comforted us and sustained us.”

Christian Institute spokesman Simon Calvert commented on the ECHR’s dismissal of Lee’s appeal, stating that the ECHR made “the right decision.”

Continuing, Calvert noted that the U.K. Supreme Court “engaged at length with the human rights arguments in this case and upheld the McArthurs’ rights to freedom of expression and religion. It was disappointing to see another attempt to undermine those rights, so it is a relief that the attempt has failed.”

“I’m surprised anyone would want to overturn a ruling that protects ‘gay’ business owners from being forced to promote views they don’t share, just as much as it protects Christian business owners,” he added.

Speaking on the 2018 Supreme Court ruling, Calvert said that the unanimous decision of “five of the country’s most distinguished and experienced judges was welcomed by lawyers, commentators and free speech experts from across the spectrum. They all knew of the implications for freedom of speech and religion, had the decision gone against Ashers.”