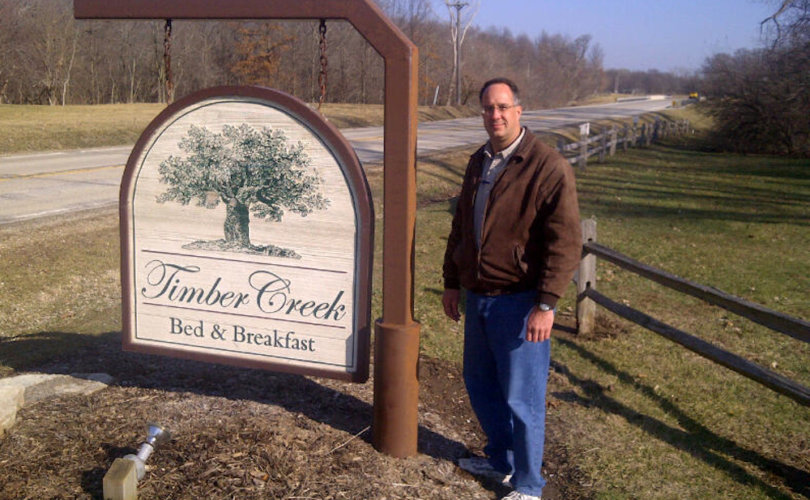 PAXTON, Illinois, December 8, 2016 (LifeSiteNews) — The Illinois Human Rights Commission has ordered a Christian businessman to pay two homosexuals $30,000 because he declined to host their gay “wedding.”

A panel of three commission members refused to hear an appeal from TimberCreek Bed and Breakfast owner Jim Walder, who in 2011 turned down a gay couple's request to celebrate their “union” at the Christian-owned business on religious grounds.

In addition to the $30,000 that Walder was ordered to pay for causing emotional distress, he is responsible for more than $50,000 in attorney fees.

Two of the three commission members on the panel were publicly involved in gay activism and/or were openly homosexual, according to Walder.

“The fix was in from the get-go,” Walder said.  He plans to appeal to the full commission.

The small business owner told The Christian Post that “to host gay marriage” violates his “sincerely-held Biblical belief that marriage is between one man and one woman.”

Earlier this year, Judge Michael R. Robinson ordered Walder to compensate the homosexuals for “emotional distress” and to “cease and desist from violating the Human Rights Act by discriminating on the basis of sexual orientation.”

“This feels like blatant reverse discrimination against all business owners, Christian or otherwise, by the IHRC, which is supposed to be an unbiased, neutral party in resolving complaints,” Walden told The Christian Post.  “The public probably assumes that these three commissioners were nonpartisan, fair and neutral when the exact opposite was the case.”

“We will never host same-sex civil unions,” Walder said.  “We believe homosexuality is wrong and unnatural, based on what the Bible says about it. If that is discrimination, I guess we unfortunately discriminate.”