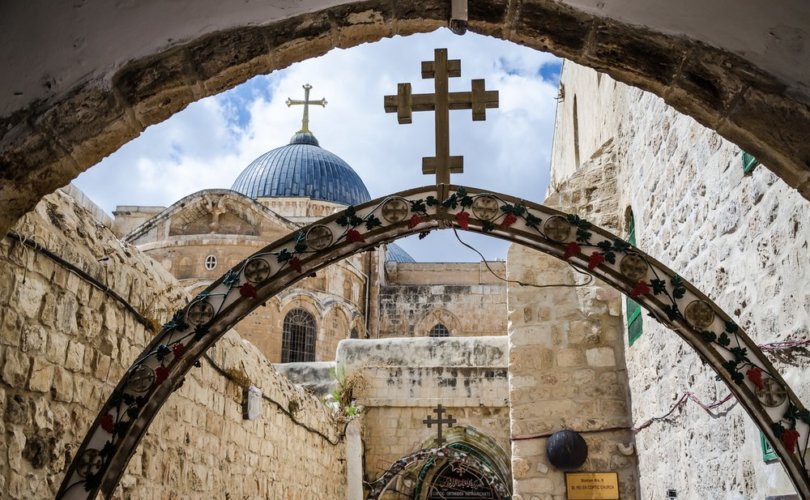 (LifeSiteNews) — Catholic, Orthodox, and Protestant leaders in the Holy Land have sounded an alarm that radical groups in the region continue to violently attack Christians and their churches “in a systematic attempt to drive” them “out of Jerusalem and other parts of the Holy Land.”

The Patriarchs and Heads of Churches in Jerusalem issued a letter on December 13 titled “Statement on the Current Threat to the Christian Presence in the Holy Land” in which they formally address “countless incidents of physical and verbal assaults against priests and other clergy, attacks on Christian churches, with holy sites regularly vandalized and desecrated, and ongoing intimidation of local Christians.”

Throughout recent years, and less recent, there have been reports of radical Jewish individuals and groups in Jerusalem spitting on Christians, disrupting their prayer and likely firebombing their property, which Church authorities have routinely condemned.

In 2015, such radicals made international news when they torched the Church of the Multiplication of the Loaves and Fishes at Tabgha in the Galilee, where Jesus Christ performed one of these two miracles recorded in the Gospels.

The prelates go on to indicate a contrast between the “declared” laws on the books in Israel and how these laws are actually enforced by government officials.

“We acknowledge with gratitude the declared commitment of the Israeli government to uphold a safe and secure home for Christians in the Holy Land and to preserve the Christian community as an integral part of the tapestry of the local community,” they wrote.

“It is therefore a matter of grave concern when this national commitment is betrayed by the failure of local politicians, officials and law enforcement agencies to curb the activities of radical groups who regularly intimidate local Christians, assault priests and clergy, and desecrate Holy Sites and church properties,” stated the Christian leaders.

While the arson case at the Church of the Multiplication produced several suspects, two indictments, and just one conviction, even these modest results of bringing such assailants to justice are rare.

According to a 2017 report, within an eight-year timeframe, 53 churches and mosques were vandalized in Israel and Palestinian territories under Israeli military occupation. Of those incidents there were only nine indictments and seven convictions, with 45 of those cases being closed.

When asked who the seven convicts were at the time, Haaretz reports Israel’s Justice Ministry said “it didn’t have this information and couldn’t extract it from its computer system,” while Tag Meir, a local organization that “monitors hate crimes,” said it could only verify two cases that were actually solved, one being the arson case at Tabgha.

Tag Meir Chairman Gadi Gvaryahu said, “Without a doubt, they aren’t looking hard enough,” and added that “some crimes remain unsolved despite security camera footage that included images of the suspected vandals’ cars.”

Of special concern to the Patriarchs and Heads of Churches in Jerusalem is maintaining “the spiritual and cultural character of Jerusalem’s distinct and historic quarters” in the Old City, divided between the Christian, Armenian, Jewish and Muslim communities.

One such case entailed a 2017 incident where Jewish settler groups were allowed to “seize two hotels and a large building in the Old City of Jerusalem, which belongs to the Greek Orthodox Patriarchate.”

The Church leaders went on to recognize the right of all Christians around the world to come to the Holy Land on pilgrimage and appealed to local politicians and officials to join them in “urgent dialogue” on how to fulfill their “declared commitment to protect religious freedom,” particularly creating a “a special Christian cultural and heritage zone to safeguard the integrity of the Christian Quarter in Old City Jerusalem.”

Also urgent for such discussions is how to “[d]eal with the challenges presented by radical groups in Jerusalem to both the Christian community and the rule of law, so as to ensure that no citizen or institution has to live under threat of violence or intimidation.”

Given long-established evidence of hostility some groups have toward Christians in the Holy Land, even legislating explicit discrimination against them, many question whether the plea from the bishops can bear the fruits of security and peace.

Former Latin Patriarchal Vicar of Jerusalem Bishop Giacinto-Boulos Marcuzzo commented, “We are in favour of this appeal but doubts remain about whether it will be heeded by Israeli authorities.”