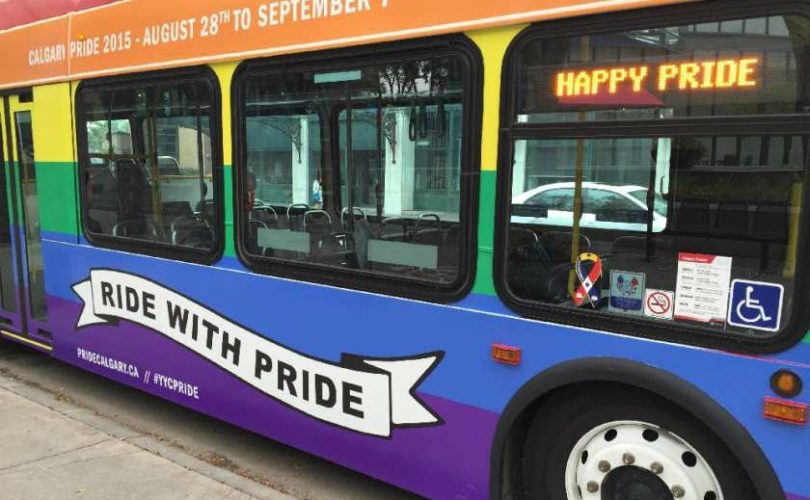 CALGARY, Alberta, September 2, 2015 (LifeSiteNews) — A Calgary bus driver who is a faithful Christian says he will refuse to drive a city bus decked out by his employer to promote the September 6 Gay Pride Parade, even if it means losing his job.

“I can’t be a part of promoting something that I believe strongly does not represent my beliefs. So, I would ultimately get fired,” said Jesse Rau, a Calgary Transit Authority employee, to NewsTalk 770.

Last week Calgary Transit unveiled a “Pride Bus” it had specially decorated with a rainbow paint job to promote the city’s annual Calgary Pride Festival. A large banner on the side of the bus states: “Ride with Pride” and provides the dates for the celebration of homosexuality, something that Christians believe is a deviation from God’s plan for human sexuality.

“As a Christian I believe in the Bible as being the Word of God, and it teaches that sexual immorality is sin. I don't want to have any part in promoting behaviors and lifestyles that put people in more trouble with God than they already are, and that create more brokenness and despair in their lives,” Rau said.

Rau, who is married with a family, said that as a Christian he cannot support a lifestyle that God does not condone. He said that Calgary Transit is promoting a “very radical sexual movement” with the ‘Pride bus’ and is now pushing these values on its employees by asking them to drive the bus.

“Calgary transit tells us to focus on our jobs and not to put [forward] our own agenda, and now this belief system is being pushed on me,” he said.

Rau, who has been on the job for less than a year and is still in a period of probation, fears that staying true to his Christian beliefs will ultimately cost him his job.

“Unfortunately, we live in a culture where if you disagree with someone’s lifestyle, the accusation is that you hate the person. I have a family to support and I am very concerned about losing the job. [Being a city bus driver is] something I’m very proud to be a part of, but when it goes against the most important things I stand for, or if I’m asked to compromise in such a big way for what I believe to be right, then I have to lose my job,” he said.

The ‘Pride bus’ will be sent on every route in the city during the 10-day Gay Pride event that began Friday, and also in the parade through downtown Calgary.

“We're hoping to celebrate the diversity that is Calgary,” Doug Morgan, director of Calgary Transit, told reporters. “We want to celebrate our customers . . . and that our doors are open to everyone . . . recognizing Calgary is changing and we want to be part of that.”

So far, Calgary Transit has decided to remain silent on what will become of Rau, with City Manager Feff Fielding going as far as calling the story a “non-issue.”

But earlier this week Rau accused the transit service of attempting to silence him by bringing up what he said were false accusations about his driving record.

“I totally feel absolutely threatened, but I'm sick of dodging and ducking this issue,” he said standing in front of Calgary City Hall on Monday along with his wife.

Rau said that his employer notified him that over the weekend a complaint about him texting while driving had been filed against him. If true, he would be immediately fired.

“It's an absolutely false accusation,” he told reporters, adding that video surveillance would prove his innocence. “My suspicion would be that someone who is a part of Calgary Transit, [someone there] in power, that is upset about [me] raining on this parade, would like to sabotage me.”

Despite being mocked by the city’s radio show hosts for standing by his Christian principles, Rau is finding support from Christian groups around the country.

Concerned Christians of Canada say Calgary transit is using what it calls “questionable tactics” against a Christian employee.

“After a year of working for Calgary Transit, Jesse Rau, a City Transit employee with a previously spotless employment record, has suddenly faced pressure and false accusations after speaking out against the new sacred cow, the ‘pride bus.’ Within the last month Rau has suddenly had a warning from the powers that be at the City Transit indicating that he'd better be silent about his beliefs and make no more trouble in the media if he wanted to keep his job,” the group stated on its website.

As for Rau, he is putting his trust in God. “We don't kill for our faith, we die for it. Proverbs 29:25 – The fear of man brings a snare, But whoever trusts in the Lord shall be safe,” he posted on Facebook yesterday.