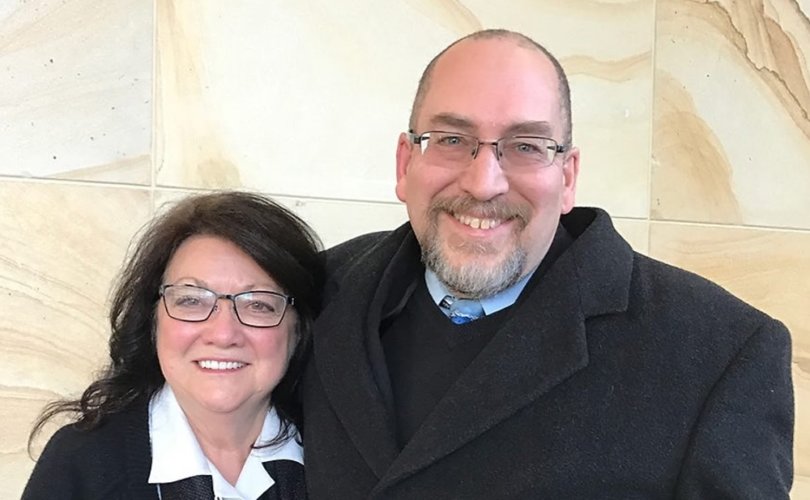 Philip Zodhiates (left) with his wife

December 7, 2018 (LifeSiteNews.com) – A Christian businessman began his federal prison sentence Wednesday after being convicted of the crime of “international parental kidnapping” for helping a mother and her child escape control of an unrelated lesbian “mother” imposed on the child by a Vermont court.

Philip Zodhiates, 61, is president of the direct mail fundraising company Response Unlimited, which helps conservative organizations raise money for their causes. Following prosecution by the Obama administration for driving Lisa Miller and her daughter Isabella to the Canadian border in 2009, Zodhiates is now inmate 18649-084 in the Ashland, Kentucky Federal Correctional Institution, where he turned himself in Wednesday according to the sentence of a federal judge.

Lisa Miller, an ex-lesbian and revert to Christianity, sought to escape from the U.S. following court-imposed visitations of her daughter Isabella with lesbian Janet Jenkins. Jenkins is biologically unrelated to Isabella, but was named by a Vermont judge as Isabella’s other “mother.”

Miller and others testified that Isabella appeared traumatized by the visits with Jenkins, but the Vermont court refused to rescind its visitation order. Miller then left the U.S. with her daughter in 2009, with the help of Zodhiates, who allegedly drove her to the Canadian border. From Canada, Lisa and Isabella flew to Nicaragua. Their current whereabouts are unknown.

At the time of his sentencing, Zodhiates told the court that he was motivated by a Christian desire to protect Isabella from sexual abuse.

Zodhiates is the adoptive father of six children from Central America.

After federal appellate judges refused to hear Zodhiates’ last appeal in October of this year, his attorneys began to prepare an appeal to the U.S. Supreme Court, and asked the court for a stay of sentence pending the filing and the court’s ultimate decision. Although Justice Ruth Bader Ginsburg turned down the request for a stay of sentence, Justice Neil Gorsuch decided to place the petition for the stay of sentence on a list of conference items for January 4 of next year, allowing all the justices to vote on the matter. In the meantime, it appears, Zodhiates will remain in federal prison.

Zodhiates regards himself as the target of a politically-motivated prosecution that served to promote the LGBT agenda embraced at the time by the administration of Barack Obama. He maintains he broke no law in helping Lisa and Isabella to leave the country, and that federal prosecutors manipulated the case to achieve a guilty verdict against him.

“Lisa Miller had full custody of her daughter when they left the country,” Zodhiates told LifeSiteNews a few days before his imprisonment. “They had no travel restrictions and had legal passports. No laws were broken by anyone, except by Janet Jenkins, who sexually abused a very young child.”

“The Vermont courts refused to admit the affidavits by social workers who testified that Isabella Miller was being abused by Janet Jenkins, and they buried the very considerable evidence of sexual abuse because they had a political agenda of nullifying the many marriage amendments of so many states and the federal Defense of Marriage Act,” said Zodhiates.

“It was nothing less than court-ordered sexual abuse,” Zodhiates added. “The courts were adamant about sanctioning the sexual abuse of a child in order to push through a vile political agenda. They are the ones that should be serving prison time.”

Zodhiates said that he refused plea bargains offered to him by prosecutors because “I’d have to plead guilty to aiding and abetting an international parenting kidnapping, when there was no kidnapping.”

“I could not forsake Christ’s Word even if it meant no prison time,” Zodhiates said. “So prison has been expected all along. But that’s okay. We are all to expect it, and count it all joy. God promises to bring us through the trials and tribulations, and I have to say, it’s drawn me closer to the Lord in a tremendous way. He wants to bring us to the point where we are totally dependent on Him, where nothing we can do can make any difference.”

Zodhiates is third to be imprisoned for aiding Isabella’s escape

Zodhiates is the third person to suffer imprisonment for the cause of helping Lisa and Isabella escape the forced visits with Jenkins. Two Mennonites, Timothy Miller and Kenneth Miller (who are unrelated to one another and to Lisa and Isabella), have been imprisoned as well. Kenneth Miller in particular served more than two years in prison for his role in the escape, and risked more prison time for refusing to testify about the involvement of others. After a judge sought to induce him to speak by placing him in jail before serving his main sentence, Miller said that his time behind bars had only made his convictions stronger.

“As non-resistant bearers of the Truth, we should not sit by as ‘the quiet in the land’ while society around us falls into ruin,” wrote Miller from prison. “Rather our lives should be a prophetic protest, an exposé of Satan's tyranny, and we should not hesitate to oppose His lies with the Truth, by word and action.”

The Mennonites of the “Nicaraguan Brotherhood” have also suffered persecution for allegedly harboring Isabella, but have refused to cooperate with Nicaraguan police in their search for the girl, stating that they would rather die than deliver her up to her persecutors.

“The fact is that suddenly we find ourselves having to choose between obeying God and man made laws,” the Nicaraguan Brotherhood wrote in a public statement issued in 2012. “We have chosen to obey God. We are willing to give up our rights, go to jail, or even die, for the cause of helping anyone become free from a sinful life and helping that person to live in obedience to God’s Word.”

Sworn affidavits submitted to courts regarding trauma suffered by Isabella

As LifeSiteNews has previously reported, a number of affidavits were submitted to the Vermont courts regarding troubling behavior and symptoms of trauma from Isabella following her court-ordered visits with Jenkins. Moreover, Lisa Miller herself spoke to LifeSite in 2008 about disturbing evidence of trauma suffered by her daughter following the visits.

Miller and several other witnesses gave testimony about the trauma Isabella appeared to be suffering as a result of her visits with Jenkins in sworn affidavits submitted to the Vermont courts.

Among them is testimony by clinical therapist Sylvia Haydash, who had two clinical sessions with Isabella and observed her for an hour on another occasion. She concluded that the visits with Jenkins were doing serious harm to the child, causing anxiety, renewed bed-wetting, and general psychological regression.

“Isabella appears to have been traumatized by the limited visitation thus far, a serious consequence, taking Isabella in a negative direction as compared to Isabella’s condition before the recent visitations where she was a child that was well-adjusted, flourishing, above-the-curve developmentally, verbally gifted, and readily able to separate from Lisa and meet with other people,” wrote Haydash in 2007.

A radio interview given by Zodhiates only days before his incarceration can be found here: