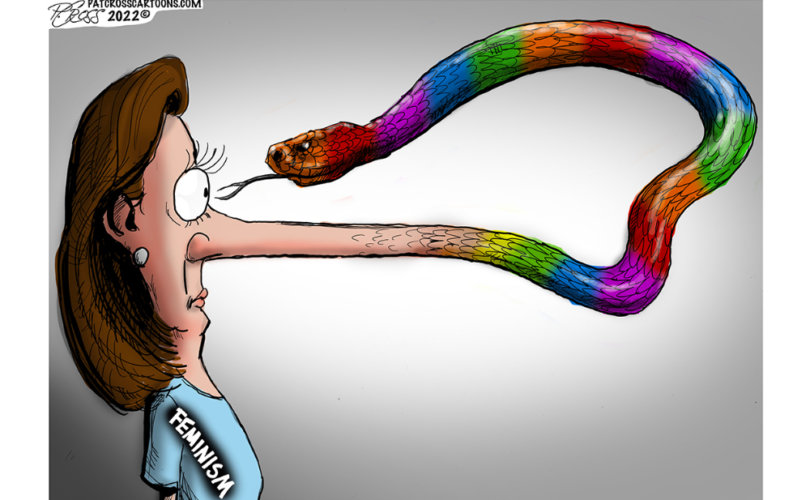 (LifeSiteNews) – A Catholic cartoonist aims to highlight the irony and absurdity of current woke agenda, by taking aim at globalist and pro-abortion advocates.

Patrick Cross’s images are aimed at bringing humor to a range of current political and social issues, including gay marriage, vaccines, and abortion.

“From a very young age I have loved drawing and I have loved America,” Cross told LifeSiteNews. “Those two things over the years along with the encouragement of friends and acquaintances inspired me to start cartooning.”

“I hope my cartoons communicate truth and direct America, at least in a small way, back to God,” he added. “Cartoons, unlike articles or long essays, have the advantage of communicating ideas, hopefully true ones, very quickly.”

“I also hope they encourage people who feel that they are alone in a secular culture,” Cross continued. “The secular culture is so powerful that I think people who believe in objective truth sometimes feel like they’re alone.”

One of Cross’s recent drawings focussed on the impossibility of same-sex “marriage.” It depicts two airplanes, the first called “Marriage” with the wings labelled “man” and “woman” respectively. The next plane, called “Gay Marriage,” has two wings on one side, both labelled “man,” showing the unbalanced nature of so-called gay “marriage.”

Another drawing humorously highlights the monetary motive behind vaccines. According to CNN, in 2021, Pfizer reported adjusted earnings of $7.7 billion, up 133% from a year earlier.  Vaccines made up over 60% of their revenue, with vaccine revenue rising to $14.6 billion from only $1.7 billion a year earlier.

A third cartoon features a head demon instructing his underling regarding the possession of pro-abortion Democratic senator Elizabeth Warren.

Another cartoon makes a jab at the Biden Administration’s redefinition of a recession ahead of a possibly damaging GDP report. The administration maintains that an increased number of jobs are a sure sign of economic growth, despite historic inflation.

In a drawing titled “Coming Back to Bite,” Cross depicts the dangers of ‘woke’ feminism, when biological men compete and dominate in female sports, thereby forcing biological women out of the running and stealing their awards.

Cross’s most recent cartoon states the unpopular truth that homosexual activity spreads monkeypox, while straight couples are not affected.

Through his cartoons, Cross aims to expose the absurdity and irony of current cultural issues in a humous way. His images spark a return to reality for a modern society stuck in the dystopian world of social media and mainstream news.

Notwithstanding his success at cartooning, Cross publicized his intention to put down the pen and enter religious formation in St. Michael’s Abbey in Orange County California. “As the great Calvin Coolidge once said, ‘The things of the spirit come first’,” he wrote.