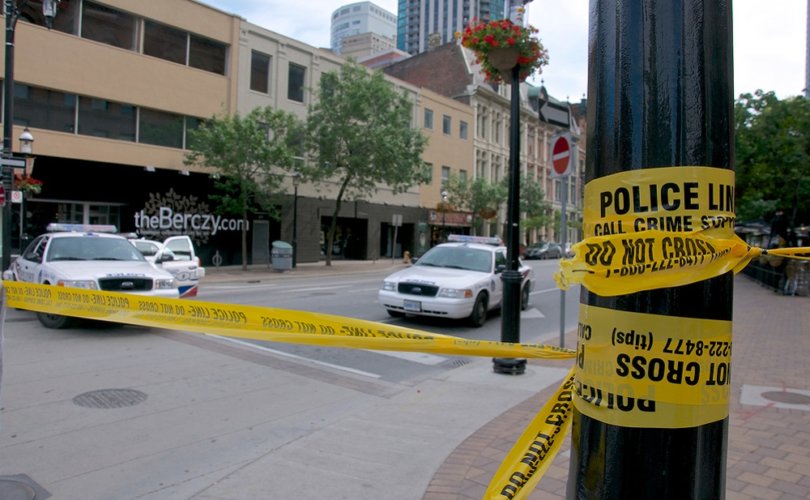 AYLMER, Ontario, May 5, 2020 (LifeSiteNews) — A Christian church in Ontario filing a Canadian Charter of Rights and Freedoms challenge against the Ontario provincial government after police showed up at a drive-in service and threatened to hold those present “accountable.”

The Church of God in Aylmer, Ontario says police, acting on the Ontario provincial government’s Emergency Management and Civil Protection Act, are infringing on their “freedom of peaceful assembly.”

The legal challenge from The Church of God comes with the support of the Alberta-based Justice Centre for Constitutional Freedoms (JCCF), who is expected to file the case soon.

Last week, Aylmer police said that the Church of God congregants who took part in a Sunday drive-in service on April 26 would “be held accountable” for allegedly breaking coronavirus social distancing rules. Police said they would use video evidence they recorded of the event to back any fines issued as a result.

Lisa D.S. Bildy, a lawyer for the JCCF, said Saturday’s notice of a court challenge on behalf of The Church of God against the government of Ontario’s premier, Doug Ford, is being done in the name of ensuring that their congregants' constitutional rights are respected.

“For many religious communities, coming together to worship is an important part of their faith, and while not perfect, solutions such as drive-in services allow them to exercise their fundamental freedoms of peaceful assembly and religion while still respecting the government’s orders to protect public health,” said Bildy in the JCCF release news release about the court challenge.

“The Covid-19 outbreak, however, does not suspend the exercise of the Charter. The restriction on religious gatherings, in which people exclusively occupy their personal vehicles on a parking lot while worshipping, is irrational, unnecessary, and not a minimal impairment of Charter rights.”

Ontario’s Emergency Management and Civil Protection Act says that it is against the law for more than five people to get together to conduct a religious service. The pastor of The Church of God, Henry  Hildebrandt, feels this a direct violation of religious freedom as protected under the Canadian Charter of Rights and Freedoms.

LifeSiteNews contacted Premier Ford’s office for comment about his government's position on the forthcoming court challenge.

In an emailed response, Ivana Yelich, director of media relations and press secretary for Premier Ford, said the provincial government does not inform the police what to do.

Despite not publicly stating his opinion on the Aylmer situation, Premier Ford was vocal about new drive-by parade restrictions issued by the city of Burlington last week.

“Let's be a little lenient on stuff like that. I’d understand if there were groups of people marching down the street side-by-side chanting, but that’s not the case. They’re in individual cars, driving by. What does it last, a few minutes?” said Ford.

Premier Ford’s post-coronavirus relaunch plan announced at the end of April does not specifically mention when religious services will be allowed to resume. LifeSiteNews asked the premier’s press secretary about this but as of press time has not received a response.

LifeSiteNews contacted the Archdiocese of Toronto to see if it would be willing to respond with a comment about its position on the JCCF court challenge against the Ford government. The archdiocese was also asked what lobbying efforts it is doing to get the Ford government to reopen religious services in Ontario.

In an email sent out on May 3, pro-life Conservative Party of Canada leadership candidate Derek Sloan said Ontario needs to allow for drive-in church services as other provinces have.

“Premier Doug Ford must act — now — to ensure that people in Ontario are able to exercise their constitutional right to religious worship,” said Sloan. “And every public official in Canada who claims to respect religious liberty must speak out.”

Sloan sparked a media frenzy over a week ago for saying in a letter and video that Canada’s chief medical officer, Dr. Theresa Tam, should be fired for her coronavirus response.

In a statement, Sloan clarified his remarks but refused to offer an apology to charges that he was “racist.” Campaign Life Coalition (CLC), Canada’s top pro-life and pro-family organization, said that should the Conservative Party of Canada oust Sloan for his comments, it could destroy the party.

The Church of God had twice previously held a drive-in-style Sunday service without any issues and with the full approval and permission of the local police, said Hildebrandt.

Aylmer police chief Zvonko Horvat instructed his officers to begin to lay charges under the Ontario Emergency Measures and Civil Protections Act against any “faith-based organizations that break the order banning gatherings of more than five people.”

However, despite the earlier warning and saying they have reasonable grounds to lay charges, Aylmer police backed off on holding the noncompliant citizens “accountable” for attending the drive-in Sunday service.

The JCCF sent a letter dated April 24 to the Aylmer police asking them to rescind their decision to promise to ticket church members. This same letter was copied to Premier Ford.

This past Sunday, The Church of God held its fourth drive-in Sunday service. Although police were not visibly on site filming the service, it was reported by Rebel News that on site was at least one unmarked police car.

On Monday, it was reported that Aylmer police received four complaints with regard to the fourth Sunday service. Horvat was quoted as saying he is “speaking to the investigator this week” to look at “all the evidence and statements from people who called in, and we’ll take action from there.”

Recently, the JCCF served a legal warning to the Saskatchewan Health Authority, saying it violated the rights and freedoms of worshipers from the Nipawin Apostolic Church by banning their drive-in Easter Sunday.

The government of Saskatchewan later reversed the decision by its health authority and issued guidelines that recognize the right of churches to hold such services as long as safety precautions are heeded.