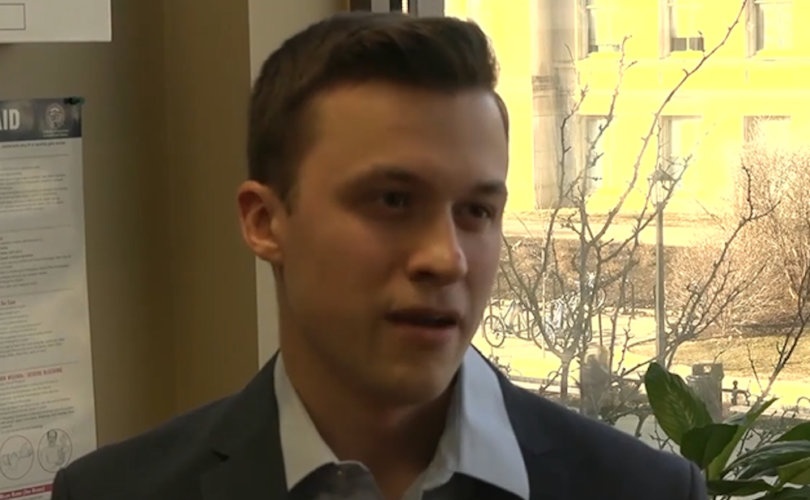 Jacob Estell is the spokesman for Business Leaders in Christ at the University of Iowa.

IOWA CITY, Iowa, August 1, 2018 (LifeSiteNews) – A Christian student organization at the University of Iowa says it has not and will not surrender to the administration’s demands that it allow openly-homosexual men to run for leadership positions.

Business Leaders in Christ (BLinC) holds weekly meetings, group discussions, and Bible studies for the purpose of strengthening members’ faith and helping them apply it in the business world.

For months, it has been locked in a legal battle with the administration for rejecting Marcus Miller’s application for a leadership position. BLinC rejected Miller, a gay activist, because he refused to agree to the club’s Statement of Faith that called for sexual chastity outside of natural marriage.

Despite the fact that multiple campus organizations with a wide range of perspectives require members to accept their own sets of beliefs and behavioral standards (including Miller’s own gay “religious” student group Love Works), the school revoked BLinC’s status as a registered student group, blocking it from participating in campus recruitment fairs, using campus facilities, or receiving campus funding or other benefits.

The group won a victory in January when U.S. District Court Judge Stephanie Rose granted a temporary injunction blocking the University of Iowa from deregistering the group for 90 days. Rose based her decision on the university’s “selective enforcement of an otherwise reasonable and viewpoint neutral nondiscrimination policy.”

BLinC resumed recruitment soon after. A jury trial is currently slated for March 2019 to decide the case on the merits.

To overcome the “selective enforcement” objection when the time comes, the University of Iowa has since begun deregistering dozens of student groups, hitting any that didn’t sign a “human rights” policy mandating the acceptance of any student regardless of race, religion, national origin, sexual attraction, or gender identity.

The Sikh Awareness Club, Young Americans for Liberty, National Association for the Advancement of Colored People, Students for Human Rights, Japanese Students and Scholars Club, and Chinese Student Christian Fellowship were among the the groups to lose their registered status.

All told, the university found that 356 groups lacked the full “human rights” clause in their constitutions. Groups like the NAACP soon rewrote theirs to restore their registered status, and many are expected to do the same.

“The University is discriminating against (us) because of our religious beliefs, while allowing other student groups to form around their shared values and beliefs,” BLinC spokesman Jacob Estell told The College Fix Wednesday. “We have not changed our mind or caved in to the university’s wishes.”

He explained that BLinC already had the anti-discrimination text in its constitution, and that its stance is based on behavior, not identity.

“Anyone is, and always has been, welcome to be a member of BLinC,” Estell said. “We only ask that our leaders align with our mission, just like the Republican and Democratic student groups, the pro-life and pro-choice student groups, the fraternities and sororities, and every other group on campus does.”