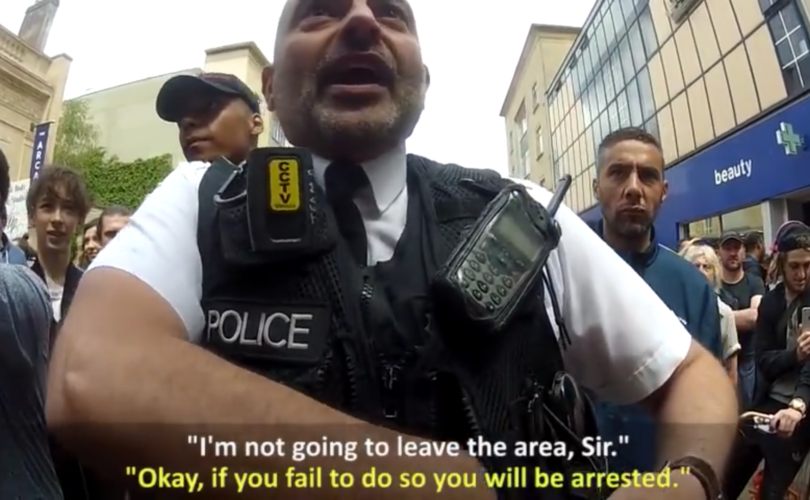 Their crime: speaking about Christianity in a sometimes-hostile crowd that includes Muslims, and LGBT supporters.

While the judge dismissed charges against a third man, he convicted Michael Overd and Michael Stockwell on Tuesday. They face up to six months in jail.

Andrea Williams of the Christian Legal Centre, which is funding their defense, said an appeal was filed.

“We’ll take this all the way to the European Court if we have to,” Williams told LifeSiteNews. “Today's ruling, in effect, states that Bible is offensive and contains illegal speech which should not be shared in public.

“The Bible and its teachings are the foundation of our society and provided many of the freedoms and protections that we still enjoy today. So it is extraordinary that the prosecution, speaking on behalf of the state, could say that the Bible contains abusive words which, when spoken in public, constitute a criminal offense.”

The Crown prosecutor argued that Biblical claims about the unique, salvational role and divine nature of Jesus Christ were bound to offend and threaten non-Christians.

That makes them offenses under Section 31 of the Crime and Disorder Act 1998 that prohibits “threatening or abusive words or behaviour or disorderly behaviour within the hearing or sight of a person likely to be caused harassment, alarm or distress.”

At one point, prosecutor Ian Jackson told the court, “To say to someone that Jesus is the only God is not a matter of truth. To the extent that they are saying that the only way to God is through Jesus, that cannot be a truth.”

That prompted the men’s lawyer, Michael Phillips, to say, “This prosecution is nothing more than a modern-day heresy trial – dressed up under the Public Order Act.”

The men had debated Muslims in the audience that formed around them in downtown Bristol. They also disputed the truth of other faiths. Stockwell, at one point, declared, “If you are trying to come through Catholicism, through Jehovah Witnesses, through Mormonism, the Bible says you're a thief and a liar and a thief comes to steal and destroy.”

Police arrived, including one on horseback. After asking one preacher to turn down his megaphone, which he did, they arrested four men, throwing one to the ground. They took them to a police station, charged three and released them all.

Williams commented, “The aggressive treatment of Mr. Overd and his friends by the police and prosecution is shocking. We will argue [on appeal] that the police did not act in a reasonable manner. The sensible way to restore public order would have been to ask the crowd to move off. Or they could have asked the preachers to move off.”

Police could have arrested the troublemakers in the crowd, who were “mocking and taunting the preachers for over an hour.” However, by arresting the preachers, Williams told LifeSiteNews, the police were acting as censors for those in the crowd who did not want them to continue.

“That puts us in a very dangerous place. The job of the police is not to stop free speech. There have been people preaching in the street forever,” Williams said.

She told LifeSiteNews that the defense would argue that the whole premise for the law is dangerous.

“Any suggestion that there is a right not to be offended must be strongly resisted,” she said. “In today's democracy, we need the freedom to debate, challenge and disagree.”