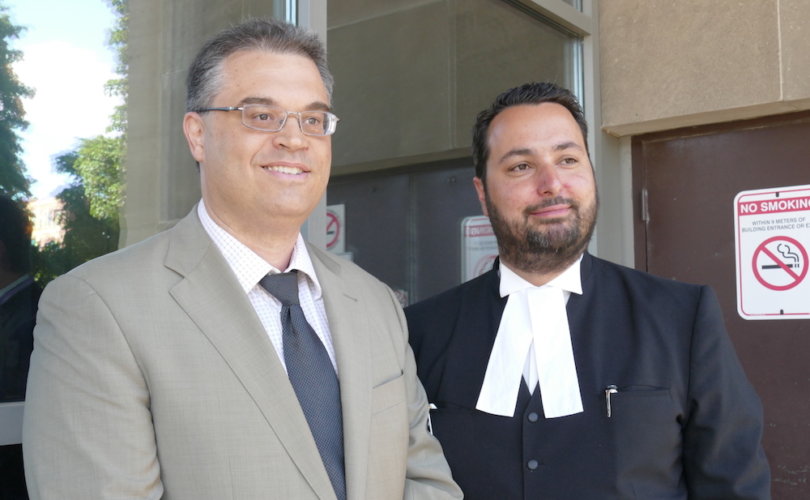 HAMILTON, November 24, 2017 (LifeSiteNews) — A Christian father has lost his appeal in a landmark parental rights case that pitted him against his public school board, the province of Ontario, and the elementary teachers’ union for his attempts to protect his children from possible LGBTQ indoctrination at school.

In a decision released Wednesday, the Ontario Court of Appeal threw out Steve Tourloukis’s case, citing lack of evidence that the school board actually interfered with his ability to bring up his son and daughter in his Greek Orthodox faith.

Tourloukis sued the Hamilton-Wentworth District School Board five years ago after it refused his request for advance notice of how and when his children would be taught about sensitive topics, notably homosexuality, abortion, and gender identity, so he could pull them from class if necessary.

The Hamilton dentist made the request in 2010 when his six-year-old son was in Grade 1, his 4-year-old daughter in junior kindergarten, and the board implementing its equity and inclusivity policy as directed by the 2009 Equity and Inclusive Education Strategy.

Tourloukis’s lawyer Albertos Polizogopoulos argued June 2016 the board violated his client’s Charter rights by preventing him from being able to shield his children if need be from what his faith considers “false teachings.”

The board, the Liberal government and the Elementary Teachers’ Federation of Ontario argued, among other things, that  it would be too difficult to let Tourloukis know when LGBTQ or gender identity questions come up in class because inclusivity and diversity are embedded across the curriculum.

He ruled the board violated Tourloukis’ Charter rights, but the violation was “reasonable” given the competing Charter “values” of “inclusivity, equality and multiculturalism,” and public school boards’ statutory obligations to support equity and create an inclusive school environment.

The Christian Legal Fellowship intervened on Tourloukis’s behalf, and, as in the lower court, the Liberal government and the Elementary Teachers’ Federation of Ontario intervened on the school board’s behalf.

In their 46-page decision, the appeal justices dismissed Tourloukis’s appeal for the “fatal shortcoming” of “lack of any concrete evidence of interference with his right to religious freedom,” wrote Sharpe in a minority opinion.

Tourloukis insisted throughout his challenge he didn’t object to the school teaching facts about homosexuality and gender identity, but that he did object to teachers giving “value judgements” to his children.

Lauwers, in a majority opinion seconded by Miller, rejected the board’s submission that the equity policy Tourloukis was challenging was “morally neutral.”

“Public education has never been morally neutral,” he wrote.

Tourloukis’s fear that “his children will be persuaded to abandon the insights of their religion if the moral positions taken in the policy materials receive the active endorsement of their teacher” is “legitimate,” he wrote.

But the Hamilton father provided no evidence this had happened.

At the same time, dismissing the appeal did not give Ontario’s equity legislation, enshrined in Section 169(1) of the Education Act, “a clean constitutional bill of health,” wrote Lauwers.

“(I)n my view there are limits imposed by the Charter on a province’s power to use publicly funded education to inculcate children in beliefs that educational authorities have determined are necessary,” he observed.

The “right of parents to care for their children and make decisions for their well-being, including decisions about education, is primary, and the state’s authority is secondary to that parental right.”

But Lauwers’ majority opinion “seems to provide a roadmap to legally challenging section 169.1 of the Education Act, from which the state derives its justification to weave homosexuality and transgender ideology throughout every grade level and subject, including math and science,” he told LifeSiteNews in an email.

“Perhaps now is the time for new parents to step forward and join the legal challenge in some capacity or to launch separate challenges, with documented evidence of indoctrination and the purposeful undermining of a family’s religious beliefs by teachers,” Fonseca said.

“Brainwashing across the curriculum”: critic

Lou Iacobelli, president of the Parental Rights In Education Defense Fund, which bankrolled the legal challenge, echoed this.

He slammed the ruling in his Everyday for Life Canada blog, describing the lack of evidence position as a “red herring.”

“A reasonable person (not Canadian judges in these days of political correctness) would say that forcing ‘diversity education’ on all public students is a direct infringement on a parent’s ability to teach the Christian faith and family values,” Iacobelli wrote.

“The three justices know about the radical sexual indoctrination that children are being exposed today in schools. As specified in ministerial guidelines produced in court, students are being brainwashed across the curriculum, that is in every subject. This is clearly a contravention of the Canadian Charter of Rights and Freedoms and the Education Act.”

But the appeal decision affirmed parental rights and “laid out a path for a future legal challenge against the section 169 of the Education Act which is a sort of linchpin being used by the educrats to justify imposing their radical sexual agenda on other people’s children,” he added.

“While Steve takes the appropriate time to decide whether to appeal the disappointing ruling, Campaign Life Coalition would like to thank him for all that he has done so far. He is a true hero and a martyr in our eyes,” Fonseca told LifeSiteNews.

“I encourage everyone who cares about parental rights to donate to his legal defense fund and help ensure his legal expenses get covered. We also encourage people to pray for Steve, and post a note of thanks to him on the Facebook page of his defense fund.”

“Our thoughts and good wishes go out to Steve Tourloukis and his family,” wrote Iacobelli.

“This must be another very difficult day. Our prayers and support are with them. And parents take note.”

For more information on the Parental Rights in Education Defense Fund, or to donate, go here.

Ontario gov’t tells court: No opt-outs for LGBT lessons, it’s embedded in all subjects and grades