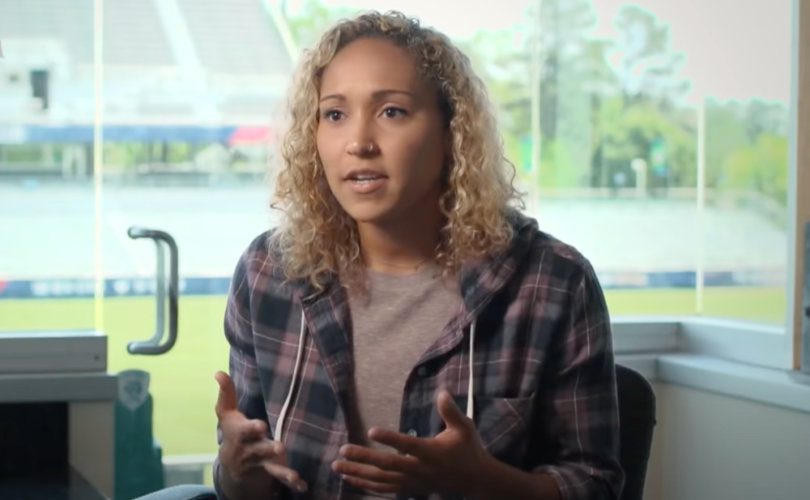 Jaelene Daniels explaining her decision to not wear an LGBT jersey in 2018.YouTube screenshot

Jaelene Daniels, a defender for the North Carolina Courage team, chose to sit out during a July 29 National Women’s Soccer League (NWSL) game rather than don the “Pride” jersey her team was scheduled to wear.

“Jaelene will not be rostered tonight as she has made the decision to not wear our Pride jersey,” the team said in a statement. “While we’re disappointed with her choice, we respect her right to make that decision for herself.”

“We’re excited to celebrate the LGBTQIA+ community with our fans, players and staff tonight and look forward to hosting our first ever Pride Festival before kickoff,” the statement continued.<

Thank you to @TheFreshMarket for supporting us on Pride Night (and always) and for your valued partnership with the club! #CourageUnitesUs | #ThisIsTheFreshMarket pic.twitter.com/89Fg7YgF5j

While Courage said they were “disappointed” by her decision, the team failed to make accommodation for Daniels to play without contradicting her faith. Daniels, a Christian, has not yet commented on missing Friday’s game.

According to Breitbart News, in 2017, Daniels turned down an offer to play for the U.S. Women’s National Team (USWNT) as she would be expected to wear a pride-themed jersey.

“I just felt so convicted in my spirit that it wasn’t my job to wear this jersey,” she said in a 2018 interview on The 700 Club. “I gave myself three days to just seek and pray and determine what He was asking me to do in this situation… I knew in my spirit I was doing the right thing. I knew I was being obedient.”

Daniels’ return to playing for Courage this season was met by protest from LGBT advocates. She responded by issuing a statement saying “I remain committed to my faith and my desire for people to know that my love for them isn’t based on their belief system or sexuality.”

Daniels’ recent decision echoes that of seven players from a Sydney-based rugby team last month who chose to sit out a game rather than compromise their beliefs. They told their coach that they would not participate in a game since the team’s new jersey incorporated the LGBT flag.

Similarly, after The Tampa Bay Rays announced in early June that players would wear pride-themed jerseys for “Pride Night,” five pitchers protested by refusing to play, citing their Christian faith. The pitchers were subsequently labeled as bigots by a reporter on ESPN.