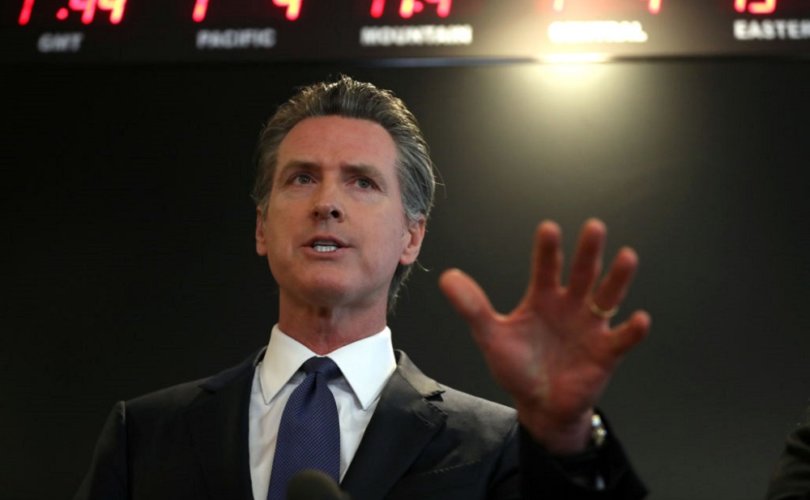 Pastor Jon Duncan emphasized that “[w]e can’t allow urgency to suspend liberty — otherwise freedom is a false promise. This is not the America that I know. This is authoritarian overreach.”

“Civil rights are not suspended by a virus,” began the complaint filed April 22 with the United States District Court for the Eastern District of California.

“Fundamental and unalienable rights are, by their very nature, ‘essential,’” the legal document continued. “Yet the State of California has, in a sweeping abuse of its power, criminalized all religious assembly and communal religious worship while allowing citizens to gather at a liquor store, pot-dispensary, Planned Parenthood, Walmart, CVS, Costco, Home Depot, and many other locations which are deemed ‘essential.’”

In strong terms, the complaint described California’s “flagrant abuse of authority” violating “fundamental and unalienable civil rights, including the free exercise of religion, right to assemble, freedom of speech, and equal protection of the law, in violation of the U.S. and California constitutions.”

The lawsuit called out California for essentially determining how churches have to worship, thus significantly interfering with the First Amendment. “Despite the absence of authority, California has limited all religious institutions to one mode of worship only: live streaming services on the internet.”

Cross Culture Christian Center in Lodi had invited its members to a Palm Sunday service outside the group’s facility, as the landlord had previously changed the locks.

“We were greeted by the Lodi police department this morning. They advised us that the locks at the building had been changed,” Pastor Jon Duncan told a local television station, “[a]nd that entrance into the grounds even over the line of the driveway was going to be a citation.”

“I am a complete and 100 percent supporter of social distancing,” Duncan said, showing how his organization would support some measures to stop COVID-19 from spreading. “But we don’t believe that a virus suspends the First Amendment.”

A press release by The National Center for Law & Policy, which had filed the April 22 complaint on behalf of Cross Culture Christian Center, pointed out that “CDC recommended health and safety measures” were followed to protect the congregation and community.

“These measures include social distancing of more than six feet, mandated hand sanitizing, and advising all elderly, ill, and immune compromised individuals to stay at home and watch church on Facebook Live.”

Pastor Duncan explained he had “informed the Lodi Police Department officers who disrupted one of our services last month that we were carefully following CDC social distancing guidelines, but they didn’t care.”

“We love people and don’t want anyone to become infected,” added Duncan. “With the health and safety standards we have put in place, we are a much lower risk of coronavirus spread than Walmart with its narrow aisles and everyone touching everything.”

“Our church believes that especially during these fearful and confusing times that church community is an essential service. People need God’s love and the church needs authentic Christian fellowship now, more than ever.”

On April 21, LifeSiteNews reported on the possibility of drive-in church services in California, which were permitted after a lawsuit was filed by the Center for American Liberty in California.