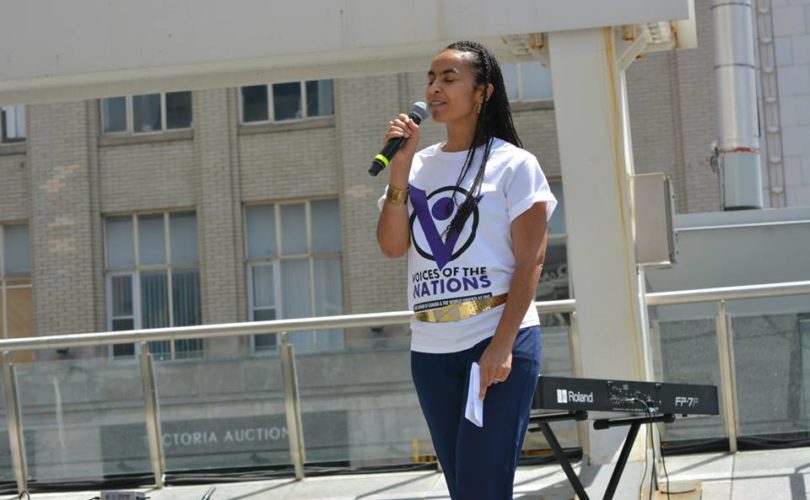 TORONTO, August 2, 2016 (LifeSiteNews) — Voices of the Nations hopes to celebrate its David-and-Goliath victory over city hall by filling Toronto’s Yonge-Dundas Square with so many Christians singing praise to Jesus on August 6 that the downtown comes to a standstill.

“Everyone who believes in Christ should be out on that day to show the City of Toronto that we as Christians are united,” VOTN director Peter Ruparelia told LifeSiteNews. “We want to close off  Yonge Street.”

The Christian organization is ready to launch its sixth annual one-day international Gospel music festival in Yonge-Dundas Square (YDS) on Saturday — despite having to adhere to a 13-point agreement with the YDS management board that stipulates, among other things, that it pre-approve all advertising and promotional material, and vet all literature to be handed out the day.

That agreement was the resolution of a widely publicized battle between VOTN and the YDS management board that erupted in October when the latter refused the Christian group a permit for its annual event on the grounds that VOTN had previously violated the board’s policy against proselytizing, because its performers sang the name of “Jesus” and “Jehovah.”

“If you’re praising Jesus, ‘praise the Lord,’ and ‘there’s no God like Jehovah,’ that type of thing, that’s proselytizing,” Natalie Belman, manager of events for Yonge-Dundas Square, told VOTN’s Leye Oyelami at the time, as verified in an audio recording obtained by LifeSiteNews.

In the ensuing pushback by Christians and allies, more than 30,000 people signed a LifeSiteNews petition, 10,000 a rebel.com petition, and Toronto street preacher David Lynn, founder of Christ’s Forgiveness Ministries, organized a Stop Bullying Christians rally in November 2015, attended by an estimated 600 people.

Meanwhile, Calgary-based Justice Centre for Constitutional Freedoms (JCCF) threatened to bring legal action against both the YDS board and the City of Toronto for violating VOTN’s Charter rights of religious freedom and expression.

In February 2016, YDS agreed to issue the permit after VOTN signed a “document of understanding” that the YDS board negotiated with JCCF lawyer Marty Moore.

LifeSiteNews called the YDS board’s public relations firm to find out if its policy against proselytizing will be reviewed or modified, but did not hear back by deadline.

Meanwhile, the victory has left its scars, with Ruparelia expressing reluctance to hold future event in YDS and noting that VOTN had not had to abide by such restrictions in previous years.

Moreover, the expenses have been heavier than in years past, VOTN had to ask the city for an extension of the July 12 deadline to pay the $14,600 fees. Three churches pitched in at the 11th hour, including his own, the All Above Christian Gathering, to cover the shortfall, Ruparelia said.

Ruparelia’s wife Beena, however, sees the August 6 event as an opportunity for a singular witness.

Usually five to six thousand show up during the day, which this year will feature performances by about 17 Gospel groups, including those from Korea, Sri Lanka, Africa, Indonesia, the Philippines and Canada.

“We’re hoping to shut down the roads,” she said. “This year, we decided not to rent any chairs because we are expecting so many people, we hoping it will be filled. … Let’s show the city of Toronto.”