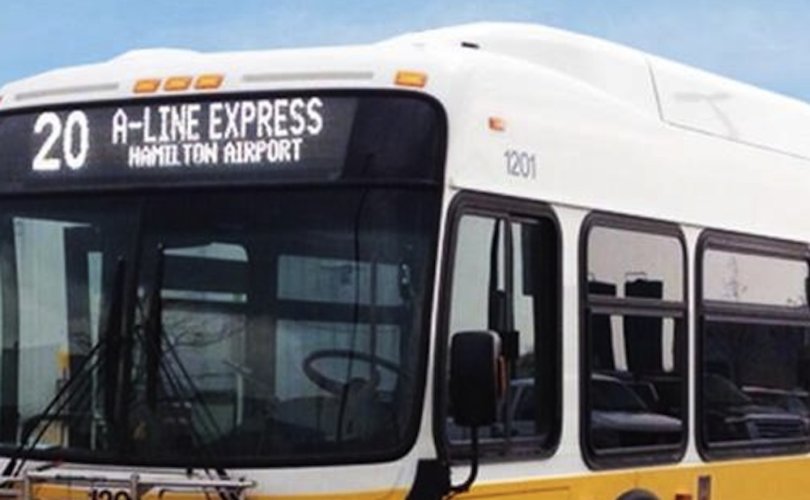 HAMILTON, Ontario, September 23, 2016 (LifeSiteNews) – After raising $50,000 for legal costs in one week, the Christian Heritage Party is poised to take the City of Hamilton to court for removing three ads from bus shelters that challenged the city’s policy allowing men who claim to be women to use women’s washrooms and change rooms.

The judge won’t be asked to rule on the city’s policy, still being finalized, on allowing “transgender” individuals to use the washroom of their choice regardless of biological gender.

“The issue here is free speech and freedom of expression,” Jim Enos told LifeSiteNews. “The Charter [of Rights and Freedoms] says the public has the right to use bus shelters to express opinions even if the government doesn’t like those opinions.”

Enos, the president of CHP Ontario, says that when CHP asked for financial support for its legal case against the city, “$50,000 was pledged in just one week.” Since that was all the money they needed, the party went ahead.

The City of Hamilton certainly disagrees with the CHP’s ads, but one question a judge will have to decide in the judicial review is whether the ads the city workers took down from three city-owned bus shelters on August 11 actually expressed any opinion at all.

The Hamilton chapter of the CHP paid $1,425 to the city’s contractor, Outfront Media, for placing the ads in the shelters. When the city received one complaint that the ads were anti-transgender, it ordered Outfront to take them down. The company spoke with Enos, who asked to keep the signs up until he could talk to the city, and Outfront agreed. But the same day, city workers took the ads down.

The city was compelled by the Ontario Human Rights Commission to open its washrooms to both and either genders after a security guard prevented a man claiming to be a woman from using the woman’s washroom at a bus station in 2014.

Public Works General Manager Gerry Davis told the Hamilton Spectator the ads were removed because “we felt the ads were inappropriate” — a word taken from its policy on bus and bus shelter ads.

There’s no denying that Cole Gately, a “transgender” activist, was offended. He told the Spectator the ads “come very close to violating trans people's human rights,” and promote “negative and inaccurate stereotypes about trans people.”

But Enos told LifeSiteNews the issue was whether space that is already being sold by the city can be closed to messages just because they challenge city policy. “The Charter says government cannot take away my right to free speech. It binds the city, not me.”

Enos pointed out that the province’s own human rights legislation expressly exempts sex-segregated washrooms from discrimination claims because segregation protects “public decency.” Enos added, “We would say women have a right, in the name of public decency, to expect to use public washrooms without having males present or the expectation of males being present.”

John Carpay, head of the Justice Centre for Constitutional Freedoms, told LifeSiteNews that even if Ontario law mandated de-gendered washrooms, the CHP still had a right under the Charter to express opposition to the law.

Carpay’s group took the City of Edmonton to court for removing bus ads offering help to women who fear assault under Islamic honour codes after receiving one complaint alleging the ads were anti-Muslim. But the city’s buses also carried ads frankly promoting Islam.

“To be meaningful,” Carpay said, freedom of expression “must include the right to communicate controversial and unpopular messages.”