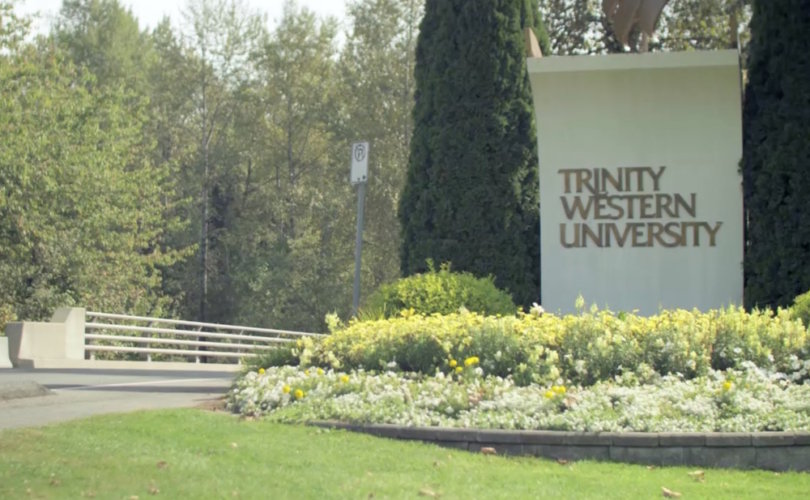 In a case that pits core constitutional freedoms of religion, conscience, expression, and association against sexual expression, the appeal court backed the latter. Its ruling stated, “TWU can hold and promote its beliefs without acting in a manner that coerces others into forsaking their true beliefs in order to have an equal opportunity to a legal education. It is at that point that the right to freedom of religion must yield.”

“This isn’t just a loss for TWU,” says Amy Robertson, a spokesperson for the private university. “This is a loss for all Canadians. Freedom of conscience and religion is the first of the fundamental freedoms mentioned in the Charter. It is deeply compromised by this decision, and everyone in Canada, religious or not, should be concerned. Canada is a diverse, pluralistic society, committed to living peacefully together even when we disagree. Many countries don’t enjoy this privilege.”

TWU vowed in its news release to appeal to the Supreme Court of Canada.

The Law Society of Upper Canada’s spokesman, Paul Schabas, said “We are pleased that the Court recognizied the Law Society’s role in preventing and removing discriminatory barriers to access to the legal profession.”

The law societies of Nova Scotia and TWU’s home province of British Columbia have also rejected TWU law grads because TWU’s Community Covenant requires all students to follow traditional Christian sexual morality, which the societies deem discriminatory to homosexuals. Courts have overruled the Nova Scotia and B.C. law societies, which have both appealed. The Nova Scotia appeal has been heard but not ruled on. The B.C. appeal is yet to be heard.

Prior to TWU proposing its law school, the law societies all formally adopted positions that “it is in the public interest not only to have equal access to the profession, but also to have a profession that is diverse and reflective of the population,” argued the Law Society of Upper Canada (Ontario).

“Accrediting TWU would violate the law society’s core commitment to equality of individuals and groups of diverse beliefs and backgrounds, and would discriminate against individuals based on sexual orientation, gender, marital status and religion.”

But TWU’s brief countered, “Absent any evidence that the Community Covenant will impair TWU’s graduates from being appropriately educated, competent or ethical (and there is none), there is no basis for the LSUC to violate TWU’s and its students’ fundamental constitutional rights in the name of the ‘public interest.’”

John Carpay, president of the Justice Centre for Constitutional Freedoms, which intervened on TWU’s behalf, said the ruling “undermined the freedom of association of every other group in Canada.” In its intervention the Justice Centre argued that Christians were like any other law-abiding group in their freedom to join together according to their interests or beliefs.

“For a free society to remain free, its citizens must accept that other people can and do have radically different conceptions of reality, including unpopular ideas about sex and sexual morality,” Carpay said.

According to Carpay, Ontario’s lower and appeal courts have invented an imaginary “legal right to be free from hurt feelings, which undermines both freedom of expression and freedom of association.”

But John Norris, who represented Ontario’s Criminal Lawyers Association in its intervention, approved the decision, saying, “The time has come to not accept at face value religious justifications for discriminatory conduct in the public sphere.”

Earl Phillips, executive director of TWU’s proposed law school, noted that “the court correctly found an infringement of TWU’s rights,” but deemed it justifiable. “That finding is a serious limitation to freedom of conscience and religion under the Charter of Rights and Freedoms.”

André Schutten, counsel for the Association for Reformed Political Action (ARPA) Canada, which also intervened on TWU’s behalf, called it “very troubling” that the appeal court would rule that it was justifiable to infringe on TWU’s religious rights.

Schutten said the court was wrong to find TWU’s covenant was discriminatory without any evidence of LGBT students being turned away. “There are Christians who are gay or lesbian who willingly sign onto this covenant and who attend TWU. That is a fact on the record which proves TWU does not discriminate.”

TWU won a similar case in the Supreme Court in 2001 against the BC teaching profession, which had refused to recognize graduates of TWU’s proposed education faculty because of the Community Covenant. But the Supreme Court has signalled recently that it is willing to reverse itself, as it did in its Carter decision legalizing euthanasia.