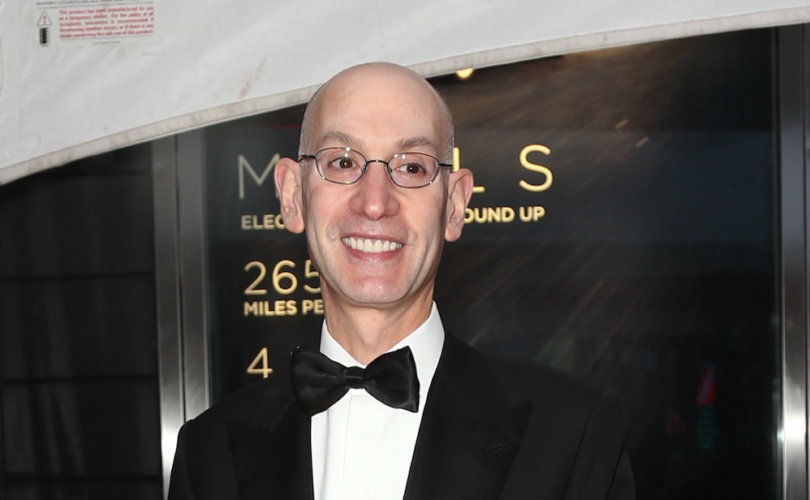 May 2, 2016 (LifeSiteNews) – Two influential Christian leaders are criticizing NBA Commissioner Adam Silver for threatening to pull the 2017 All-Star Game from Charlotte if North Carolina does not change its recent bathroom privacy law.

North Carolina has come under an all-out attack by gay activists since state legislators passed, and Gov. Pat McCrory signed into law, the bill stopping men from using women's restrooms and changing facilities, and vice versa.

On April 21, Adam Silver signalled the NBA’s support for the campaign against the law. “A change in the law is necessary for us to play in the kind of environment that we think is appropriate for a celebratory NBA event,” Silver told the Associated Press.

On ESPN’s Mike & Mike morning radio show, Silver said the NBA isn't interested in “saying 'do this or else'” regarding the 2017 All-Star Game, which is scheduled to be held in Charlotte.

“They know what’s at stake in terms of the All-Star Game,” Silver said.  “But at least at the moment, constructive engagement on our part is the best way to go as opposed to putting a gun to their head and saying ‘do this or else.’”

American Family Association President Tim Wildmon told LifeSiteNews, “We believe the hypocrisy and bullying of NBA Commissioner Adam Silver is so stunning we have no choice but to call him out on it.  Many Americans are sick and tired of being mocked and ridiculed by sexual radicals –and now they are being threatened by the NBA!”

“Before he carries out his threat against the city of Charlotte, perhaps Commissioner Silver should survey NBA fans or even the players themselves and ask how many of them are okay with men walking into women’s bathrooms while wives and daughters are in there?” Wildmon said.  “Then he might get a glimpse of how fringe his views really are.”

Further confusing the issue, Silver openly mused about the inconsistency of moving the All-Star Game from Charlotte, while the NBA Hornets not only play there but the NBA is also hosting the playoffs there.  “I’m not sure what statement we would have been making by pulling the All-Star Game, but saying we’re absolutely fine playing our playoff game in Charlotte,” he said.

Silver added, “What’s most important to this league is that there be a change in the law. It’d be easy to make a statement, but I can’t cut and run here. I’m leaving my team there.”

A few days earlier Silver told the NBA board of governors that no decision has been made about moving the All-Star Game out of the state of North Carolina.

“What hypocrisy!” Dr. Richard Land, president of Southern Evangelical Seminary (based in North Carolina), told LifeSiteNews. “The NBA wants to threaten North Carolina for its attempts to keep biologically sexual specific bathrooms, but wants to expand its product around the globe in countries where homosexuality is illegal!”

“I have a message for the NBA,” Dr. Land told us.  “North Carolina and its values are not for sale to the highest bidder, and we are not going to be intimidated or bullied by a sports conglomerate.”

Silver described changing the law which protects girls from encountering men in their bathroom stalls and showers as doing “the right thing,” and said he is sure North Carolina will come around to the correct way of thinking, because it's “a progressive Southern state.”

The North Carolina law actually does not go as far as social conservatives want.  It includes an exemption for transgender people whose birth certificate has been legally changed to that of the opposite sex.

While Republican frontrunner Donald Trump said North Carolina should not gender-restrict restroom facilities, his closest rival, Sen. Ted Cruz, supports the North Carolina law, saying, “Men should not be going to the bathroom with little girls.”

Both Democrats in the race for U.S. president are against the North Carolina law, as is President Barack Obama.