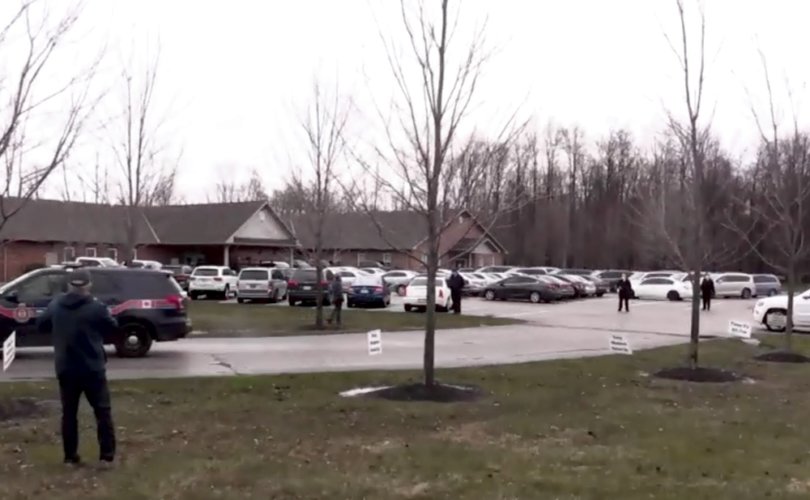 AYLMER, Ontario, May 20, 2020 (LifeSiteNews) – Ontario Christian churchgoers who were threatened with fines for attending drive-in services have emerged victorious after their provincial government bowed to pressure to officially allow for drive-in “religious services.” All faiths will be able to hold drive-in services as long as they follow “social distancing” guidelines.

The Aylmer Church of God has been the epicentre of the controversy over drive-in services. At a drive-in service this past Sunday, Henry Hildebrandt, the church’s pastor, gave thanks for the turn of events.

“Thank God we stood as one heart and as one soul, and this morning we won as one.”

Lisa Bildy, a lawyer for the Alberta-based Justice Centre for Constitutional Freedoms (JCCF), told LifeSiteNews, “We are pleased that the Ford government has finally clarified the order and is now permitting this congregation and others to worship in peace.

“It appears starting legal action was necessary to make that happen.”

Bildy noted she does have concerns that the amendment still does not allow for communion services.

“There are still inconsistencies in the treatment of faith groups as compared to businesses,” said Bildy. “While someone can get a coffee passed to them through their car window, they can't get the sacraments handed to them in the same way.”

Police said they would use video evidence they recorded of the event to back any fines issued as a result. However, despite the earlier warning and saying they had reasonable grounds to lay charges, Aylmer police backed off on holding the non-compliant citizens “accountable” for attending the drive-in service on April 26.

Hildebrandt said the law was a direct violation of religious freedom as protected under the Canadian Charter of Rights and Freedoms.

In early May, with the help of the JCCF, Hildebrandt filed a Canadian Charter of Rights and Freedoms challenge against the Ontario provincial government after police showed up at a drive-in service and threatened to hold those present “accountable.”

Bildy told LifeSiteNews that as far as the charter challenge is concerned, the JCCF is in the process of sorting out with the Ford government's lawyers what will happen next, “now that parts of the claim have been resolved.”

The order, according to paragraph 14 of subsection 7.0.2 (4) of the OEMCPA terms set out in Schedule 1, states that it is against the law for more than five people to get together to conduct a religious service.

The new precautions include a list of rules that must be adhered to, one of which bans the exchange of “materials.”

1.  Each person attending the gathering must remain within their vehicle and it must be closed to the elements.

2.  A person must not be in a motor vehicle that contains members of more than one household.

3.  The driver of a motor vehicle must ensure that it is positioned at least two metres away from other motor vehicles.

4.  No more than five persons may conduct the service from outside a motor vehicle and must remain at least two metres apart from those attending the gathering.

6.  No materials must be exchanged.

The changes to the OEMCPA means that all churches and other places of worship in Ontario will be able to hold drive-in style services without fear of being fined.

MP Derek Sloan, pro-life candidate in the running for the leadership of the Conservative Party of Canada, welcomed Ford’s allowance of drive-in services but said in an email to his followers on May 20 that this action is not good enough and churches need to be opened.

“So now what? Premier Ford has amended the order and local police can no longer harass the ‘drive-in’ service. Is everything now ‘okay’? No, not quite. Not by a long shot,” Sloan said in his email.

“It’s time — well past time, actually — to start thinking about how churches and other places of worship are going to figure in the order of things as Canada gradually reopens, piece by piece. Eight million Canadians attend worship services at least once a week, or at least they used to, just two months ago.”

Sloan then blasted the decision by Ontario’s government, which mirrors itself throughout Canada, that places of worship were deemed “non-essential.”

“It was a hurtful insult to these Canadians to have their places of worship classified as non-essential by so many provincial governments. This is just the same as telling these people of faith, who put God at the centre of their lives, that religious worship is non-essential, that God doesn’t matter,” Sloan said in his email.

“Well, God matters to many people.”

Sloan then put out a call for all provincial governments in Canada to allow places of worship to open so long as they follow safety measures.

“I call upon provincial authorities across Canada to allow churches, synagogues, mosques, temples, and all other places of worship to reopen and hold worship services while adhering to social distancing protocols. This is not a request for special treatment, but a request for equal treatment,” Sloan said.

“In Canada, we can all stay safe without surrendering our constitutional freedoms, including the freedom to worship in assembly.”

Premier Ford’s post-coronavirus relaunch plan announced at the end of April does not specify when religious services will be allowed to resume.

Some provinces such as Alberta have allowed for the resumption of indoor religious services with a maximum capacity of 50 people, and no communion is allowed for Christian churches.

As a result, the JCCF yesterday served a legal warning to Alberta Premier Jason Kenney over “his government’s arbitrary and unscientific treatment of houses of worship compared to restaurants and bars.”