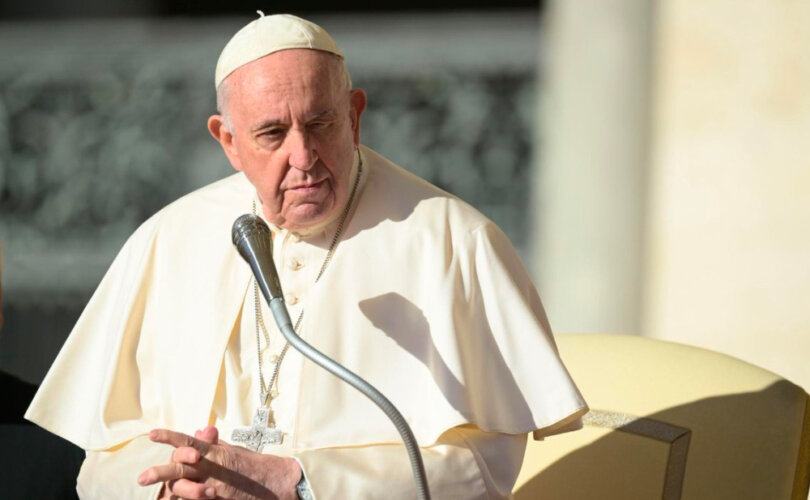 (LifeSiteNews) — A Christian group has called on Pope Francis to condemn the “ongoing extreme persecution of over 360 million Christians” around the world, while also accusing the Vatican-China deal as having caused “a brutal surge in religious persecution against Catholics and Christians.”

“The urgency of this appeal cannot be overstated as the world witnesses a massive, and intensifying, surge of Christian persecution by governments and terrorist groups,” the non-profit organization Save the Persecuted Christians (STPC) stated in their open letter to Francis in mid-December.

“As one of the world’s preeminent moral leaders, your voice and leadership are desperately needed to raise awareness about, to condemn, and to inspire the imposition of costs for the ongoing persecution of Christians, and to a lesser degree other religious minorities around the world,” urged the group.

Explaining the gravity of the situation, STPC refers to the Open Doors 2022 World Watch List which shows a sharp rise in “the number of Christians abducted, arrested and killed” between October 2020 and September 2021.

STPC’s letter specifically names and criticizes the Vatican’s secret deal with the Chinese Communist Party (CCP) and their “Patriotic Church” as one of the factors that has led to this increase.

“Since September 22, 2018, when the Vatican-China pact was first executed, the Chinese Communist Party (CCP) has engaged in a strategic campaign of destruction of Catholic and Christian churches, orphanages, worship houses, and schools,” the letter states. “In fact, the secret deal could be said to have triggered a brutal surge in religious persecution against Catholics and Christians.”

The authors of the letter quote a papal predecessor of Francis, Pope Pius XII, who wrote about the “deception and invalidity of the Chinese Patriotic Association” in his 1958 encyclical Ad Apostolorum Principis:

For under an appearance of patriotism, which in reality is just a fraud, this association aims primarily at making Catholics gradually embrace the tenets of atheistic materialism, by which God Himself is denied and religious principles are rejected.

“Understandably, a number of Catholic bishops and priests refuse to join the Patriotic Church, despite urging by the Vatican,” SPTC wrote. “Consequently, they are subject to ongoing harassment, arrest, detention and imprisonment by the Communist Chinese Party.”

SPTC criticized the Vatican for remaining “publicly silent” on the arrests and detention of persecuted Catholic bishops in China, including Cardinal Joseph Zen.

Continuing, SPTC also asked the Vatican to “immediately and publicly demand the release and restoration” of all priests and laity that were detained by the CCP.

“In the event that the government refuses or ignores the Vatican’s demand, the Holy See should terminate the Vatican/China secret pact forthwith,” the letter added.

SPTC then urged Francis to condemn the arrests of the “largely Catholic-led democracy movement in Hong Kong,” including the imprisonment of Catholic journalist and leader Jimmy Lai, who was recently sentenced to six years in prison on allegations of “fraud.” The verdict drew international condemnation with the U.S. calling the charges “spurious” in a public statement.

Other crimes listed by SPTC committed by the CCP include the practice of forced organ harvesting against religious minorities and the heavy persecution of the Uyghur people in China’s Xinjiang province.

READ: Democrats in the US ‘look away’ from persecution of Christians in Nigeria, African bishop says

Reports show that the Nigerian military has carried out “at least 10,000 secrets and often forced abortions on women and girls rescued from Boko Haram’s captivity and believed to have been impregnated by its jihadists,” with an investigative report by Reuters finding that the Nigerian Army has been running a “secret, systematic, and illegal abortion program in the country’s northeast since at least 2013.”

SPTC also mentioned the persecution of Christians in the West, namely the case of Enoch Burke, the Irish history teacher who was jailed for refusing to use a student’s “preferred pronoun.”

READ: Irish teacher jailed after refusing to use transgender pronouns: ‘I will not give up my Christian beliefs’

“The Vatican should vehemently protest this violation of Mr. Burke’s moral right to religious freedom and demand his release from prison,” the group demanded.

“In this holy season of Christmas, we need not only to hear, but to amplify the voices of the persecuted crying out in the wilderness,” the authors of the letter wrote. “It falls to us–and we respectfully suggest most especially you–to help relieve their suffering here on earth by holding accountable and imposing costs on those responsible for perpetrating such crimes.”

SPTC is a non-profit coalition “representing some 200 non-governmental organizations” who want to “educate the public on anti-Christian violence and enlist their help in: supporting those harmed for their faith in Jesus; holding those responsible accountable; and securing significant penalties on state and non-state persecutors of Christians.”