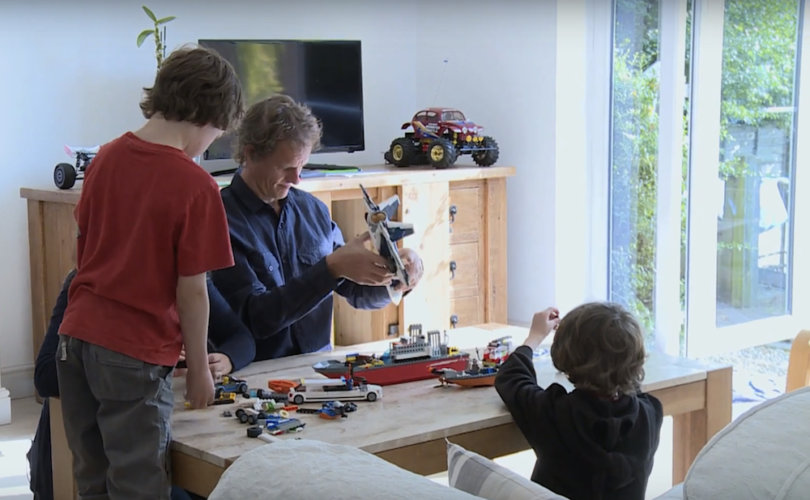 Nigel Rowe and his sons

September 13, 2017 (LifeSiteNews) – Nigel and Sally Rowe were unprepared for the brutal backlash they are experiencing after withdrawing their young sons from their school where classmates are free to “change” their gender from day to day.

The Rowes felt they had no choice but to homeschool their sons because of the primary school’s transgender agenda and the impact it has had on both children.

Last year, the Rowe’s oldest son, then age seven, was enrolled in a class where one of the boys decided he wanted to become a girl, to dress like a girl, and to be called by a girl’s name. This was confusing and stressful for their son, so they chose to withdraw him and have been homeschooling him ever since. Both parents say he’s happier now.

Fast Forward to the present: “The same thing is now happening in our younger son’s class,” said Nigel Rowe. A boy comes to class “sometimes as a girl, and sometimes as a boy.” The six-year-old told his father, “Daddy, I’m confused.  I don’t understand.”

When they found out, the parents were once again “shocked, because they had had no consultation about this,” Sally said. “We were unaware of it” because the school had made no effort to contact the parents of the gender dysphoric student’s classmates.

When the Rowes met with school administrators, they were told if a child wants to do that, we have to accept it. And if we don’t accept it, we could lose our jobs.

The political agenda of transgenderism

Nigel Rowe said, “We feel that there’s a political agenda that’s driving and pushing this.  Remember, we’re talking children that are six years of age. A six-year-old is not really able to, does not have the mental capacity to work out those kinds of things. It’s such a young age and we’re concerned about that.”

“A school environment is a place where children are children and not to be subjected to political ideology of ‘genderism,’” Rowe continued. “[Regarding] this new social construct … we don’t know truly how it’s going to affect these children.”

Jeff Williams, director of education for the Diocese of Portsmouth, explained that Church of England schools comply with the legal requirements of the Equalities Act 2010.

“Among other things, this requires schools to accept the wishes of children and their families with regard to gender identity,” said Williams. “It would be unlawful for any of our schools to do otherwise.”

“We have a social understanding that we have boys and we have girls,” Nigel said. “There’s a distinct difference between male and female, not just in what you you wear but also within our DNA, the way that we as boys and the way that we are as girls.”

“I know from speaking with other parents that other children were confused and took awhile to come around to the idea that their friend who was a boy is now dressing as a girl,” Sally added. “And our concern is that if it is within the school forum, there is the danger of bullying. There’s also the issue of toilets. Recent studies show that boys and girls absolutely do not want to be sharing restrooms.”

“This needs to be done in a way that is going to be for the benefit of all the children concerned, not just the transgender child … but also the other children who attend the school.”

The Rowes have experienced an eruption of criticism for protecting their sons. They have been accused of being hypocrites and transphobic by not only the LGBT world but by national politicians.

One member of Parliament declared that the Rowes are “not very ‘Christian:’”

Another said they are teaching their children to hate:

So sad to hear parent teach their child to hate like this- hope that both kids in get support need to be loved and love instead #equality https://t.co/st7PF8H4ly

They are accused of being “bigots” …

Why are these bigots being given airtime? Maybe these parents could just educate their child about diversity #r4today

The Rowes have indicated that they are planning to sue their sons’ Church of England school while continuing to educate their children at home.